Frontier of Physics: Interactive Map. “Ever since the dawn of civilization,” Stephen Hawking wrote in his international bestseller A Brief History of Time, “people have not been content to see events as unconnected and inexplicable.

They have craved an understanding of the underlying order in the world.” In the quest for a unified, coherent description of all of nature — a “theory of everything” — physicists have unearthed the taproots linking ever more disparate phenomena. With the law of universal gravitation, Isaac Newton wedded the fall of an apple to the orbits of the planets. Albert Einstein, in his theory of relativity, wove space and time into a single fabric, and showed how apples and planets fall along the fabric’s curves. And today, all known elementary particles plug neatly into a mathematical structure called the Standard Model. References. QM.pdf. Philosophy of Physics at UMD. New Directions in the Foundations of Physics Mathematical Association of America Carriage House 1781 Church Street NW, Washington, DC April 24 - 26, 2015 Sponsored by the University of Maryland, College Park (Logic and Philosophy of Science Research Group of the Philosophy Department, Institute for Physical Science and Technology, and the Joint Center for Quantum Information and Computer Science), Georgetown University (Graduate School, Georgetown College, and Philosophy Department), the Foundational Questions Institute (FQXi), and coordinated through the Foundations of Physics Group (University of Maryland at College Park, Johns Hopkins University, Georgetown University). 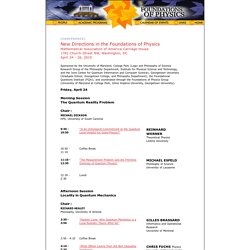 Friday, April 24 Morning Session The Quantum Reality Problem Chair :MICHAEL DICKSONHPS, University of South Carolina. Potts model. The model is named after Renfrey Potts, who described the model near the end of his 1951 Ph.D. thesis. 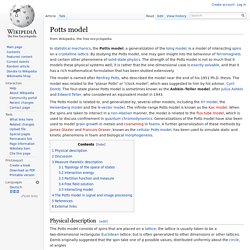 The model was related to the "planar Potts" or "clock model", which was suggested to him by his advisor, Cyril Domb. The four-state planar Potts model is sometimes known as the Ashkin–Teller model, after Julius Ashkin and Edward Teller, who considered an equivalent model in 1943. Physical description[edit] where n = 1, ..., q and that the interaction Hamiltonian be given by with the sum running over the nearest neighbor pairs (i, j) over all lattice sites. A Review of the Universe. What is a gauge? “Gauge theory” is a term which has connotations of being a fearsomely complicated part of mathematics – for instance, playing an important role in quantum field theory, general relativity, geometric PDE, and so forth. 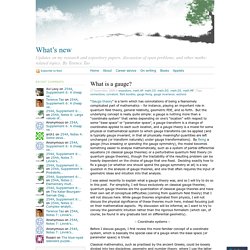 But the underlying concept is really quite simple: a gauge is nothing more than a “coordinate system” that varies depending on one’s “location” with respect to some “base space” or “parameter space”, a gauge transform is a change of coordinates applied to each such location, and a gauge theory is a model for some physical or mathematical system to which gauge transforms can be applied (and is typically gauge invariant, in that all physically meaningful quantities are left unchanged (or transform naturally) under gauge transformations).

I was asked recently to explain what a gauge theory was, and so I will try to do so in this post. . – Coordinate systems – More generally, a coordinate system can be viewed as an isomorphism and “. Lorenzo Sadun on the "Yang-Mills and Mass Gap" Millenium problem. "ER = EPR", or "What's Behind the Horizons of Black Holes?" Part 2/2. Relationist Quantum Gravity: ← Quantum Weirdness ↑ → Quantum theory is famous for the paradoxical way in which it describes the universe. 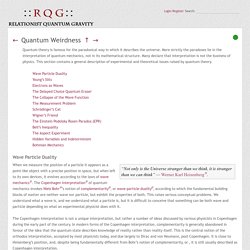 More strictly the paradoxes lie in the interpretation of quantum mechanics, not in its mathematical structure. Many declare that interpretation is not the business of physics. This section contains a general description of experimental and theoretical issues raised by quantum theory. Wave Particle Duality When we measure the position of a particle it appears as a point-like object with a precise position in space, but when left to its own devices, it evolves according to the laws of wave mechanics. Free Physics Books. Free Online Course Materials. Geometric algebra. The geometric product was first briefly mentioned by Hermann Grassmann, who was chiefly interested in developing the closely related exterior algebra which is the geometric algebra of the trivial quadratic form. 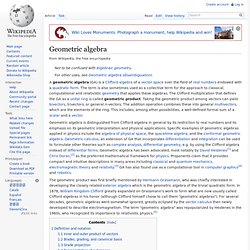 In 1878, William Kingdom Clifford greatly expanded on Grassmann's work to form what are now usually called Clifford algebras in his honor (although Clifford himself chose to call them "geometric algebras"). For several decades, geometric algebras went somewhat ignored, greatly eclipsed by the vector calculus then newly developed to describe electromagnetism. The term "geometric algebra" was repopularized by Hestenes in the 1960s, who recognized its importance to relativistic physics. Definition and notation[edit] Given a finite-dimensional real quadratic space V = Rn with a quadratic form (e.g. the Euclidean or Lorentzian metric) g : V → R, the geometric algebra for this quadratic space is the Clifford algebra Cℓ(V,g). Geocalc.clas.asu.edu/pdf/LGasSG.pdf. GrassmannVision. Grassmannian.