All Things Grammar - Home. How to Memorize Verbatim Text. If you are visiting from StumbleUpon and like this article and tool, please consider giving it a thumbs up. 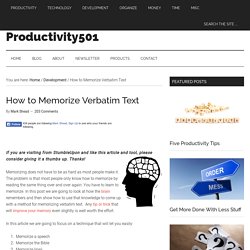 Thanks! Memorizing does not have to be as hard as most people make it. The problem is that most people only know how to memorize by reading the same thing over and over again. You have to learn to memorize. In this post we are going to look at how the brain remembers and then show how to use that knowledge to come up with a method for memorizing verbatim text. In this article we are going to focus on a technique that will let you easily: Memorize a speechMemorize the BibleMemorize linesMemorize Scripture At the end of this article is a Javascript tool that makes it easy to implement this method. Synapses and Neurons and How to Memorize In the simplified model of the brain in this discussion, we’ll be looking at neurons and synapses. When you remember something neurons fire signals down particular synapse pathways to other neurons which in turn fire signals to other neurons. 8 math talks to blow your mind. 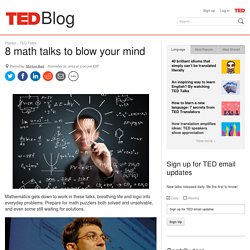 Prepare for math puzzlers both solved and unsolvable, and even some still waiting for solutions. Ron Eglash: The fractals at the heart of African designs When Ron Eglash first saw an aerial photo of an African village, he couldn’t rest until he knew — were the fractals in the layout of the village a coincidence, or were the forces of mathematics and culture colliding in unexpected ways?

Here, he tells of his travels around the continent in search of an answer. How big is infinity? There are more whole numbers than there are even numbers … right? Arthur Benjamin does “Mathemagic” A whole team of calculators is no match for Arthur Benjamin, as he does astounding mental math in the blink of an eye.

Scott Rickard: The beautiful math behind the ugliest music What makes a piece of music beautiful? How To Pass Psychometric Tests. Your Memory Palace: Method of Loci. Memory Enhancing Technique The method of loci, also called the memory palace, is a mnemonic device introduced in ancient Roman rhetorical treatises. 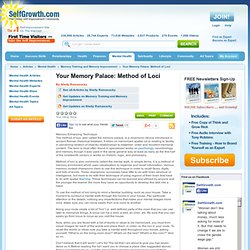 It relies on memorized spatial (of or relating to facility in perceiving relation of objects) relationships to establish, order and recollect memorial content. The term is most often found in specialized works on psychology, neurobiology, and memory, though it was used in the same general way at least as early as the first half of the nineteenth century in works on rhetoric, logic, and philosophy. Method of loci is also commonly called the mental walk. In simple terms, it is a method of memory enrichment which uses visualization to organize and recall information.

Various memory contest champions claim to use this technique in order to recall faces, digits, and lists of words. To use the method of loci bring to mind a familiar building, such as your house. Don’t believe that it will work? 1. 2. 3. How to Learn Without Memorizing. Photo by Edwin Stemp Rote memorization is an inefficient way to learn. 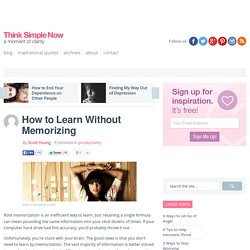 Just retaining a single formula can mean pounding the same information into your skull dozens of times. If your computer hard drive had this accuracy, you’d probably throw it out. Unfortunately, you’re stuck with your brain. The good news is that you don’t need to learn by memorization. A few years ago, I noticed that smart people seemed to learn differently than most other people. While there are undoubtedly some genetic advantages that allow some people to learn effortlessly, I think part of this difference in success comes down to strategy. Is Your Brain a File Drawer or a Web of Ideas? A computer stores information as thousands of electrical 1s and 0s in a linear fashion.

However, your brain isn’t a sequence of bits and bytes, so this approach doesn’t make sense. Yes, You Too Can Read at 1000 Words Per Minute - Testing Circus. Ever wondered how to read faster. 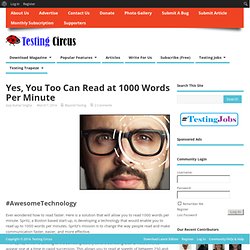 Here is a solution that will allow you to read 1000 words per minute. Spritz, a Boston based start-up, is developing a technology that would enable you to read up to 1000 words per minutes. Spritz’s mission is to change the way people read and make communication faster, easier, and more effective. With Spritz, which is coming to the Samsung Galaxy S5 and Samsung Gear 2 watch, words appear one at a time in rapid succession. This allows you to read at speeds of between 250 and 1,000 words per minute. What Spritz does is manipulate the format of the words to more appropriately line them up with the eye’s natural motion of reading. Brain Science Institute (RIKEN BSI)