Every six seconds, for millions of years, comets have been colliding with one another near a star in the constellation Cetus called 49 CETI. 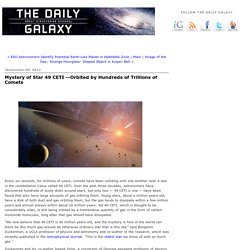 Over the past three decades, astronomers have discovered hundreds of dusty disks around stars, but only two — 49 CETI is one — have been found that also have large amounts of gas orbiting them. Young stars, about a million years old, have a disk of both dust and gas orbiting them, but the gas tends to dissipate within a few million years and almost always within about 10 million years. Three nights later, on August 18, astronomer Jerry Ehman sat at his kitchen table flipping through a thick computer-generated printout displaying the cryptic stream of blank spaces and black digits shown below. 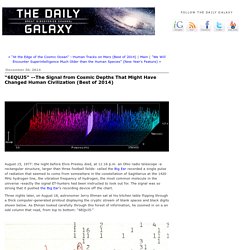 As Ehman looked carefully through this forest of information, he zoomed in on a an odd column that read, from top to bottom: “6EQUJ5.” The image above shows a graphic which was produced by the SETI from the data of the "Wow" signal. A signal (Gaussian, triplet or pulse) arises only in a single narrowband channel. All other channels contain noise. Up to now we do not know cosmic phenomena which would generate such signals. Discover the cosmos! 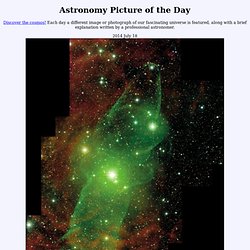 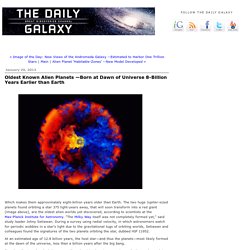 Based on the team's calculations, one alien planet is almost as massive as Jupiter and completes an orbit in roughly seven days. The other exo planet is nearly three times Jupiter's mass and has an orbital period of nine and a half months. "Usually planets form just shortly after the star formation," Setiawan said. "Second-generation planets might also form after a star has died, but this is still under debate.

" The discovery indicates that planet formation in the early universe was possible despite the fact that stars in existence back then were lacking in elements heavier than hydrogen and helium, which runs counter to a widely accepted theory called the accretion model, which says that heavy elements are needed to form planets. The Daily Galaxy via Astronomy & Astrophysics Image credit: lcse.umn.edu. Discover the cosmos! 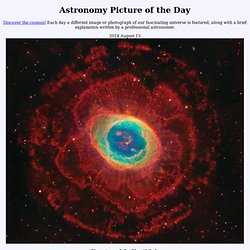 Each day a different image or photograph of our fascinating universe is featured, along with a brief explanation written by a professional astronomer. 2014 August 13 Rings Around the Ring Nebula Image Credit: Hubble, Large Binocular Telescope, Subaru Telescope; Composition & Copyright: Robert Gendler Explanation: It is a familiar sight to sky enthusiasts with even a small telescope. There is much more to the Ring Nebula (M57), however, than can be seen through a small telescope. "Maybe the cosmology is wrong, stellar physics is wrong, or the star's distance is wrong," Bond said. 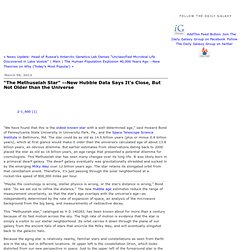 "So we set out to refine the distance. " The new Hubble age estimates reduce the range of measurement uncertainty, so that the star's age overlaps with the universe's age—as independently determined by the rate of expansion of space, an analysis of the microwave background from the big bang, and measurements of radioactive decay. This "Methuselah star," cataloged as H D 140283, has been known about for more than a century because of its fast motion across the sky. The high rate of motion is evidence that the star is simply a visitor to our stellar neighborhood. Its orbit carries it down through the plane of our galaxy from the ancient halo of stars that encircle the Milky Way, and will eventually slingshot back to the galactic halo. † School of Materials Science and Engineering, Harbin Institute of Technology, Harbin 150001, People’s Republic of China ‡ MOE Key Laboratory of Micro-systems and Micro-structures Manufacturing, Harbin Institute of Technology, Harbin 150080, People’s Republic of China ACS Appl. 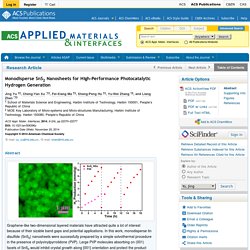