From Zen to Physics 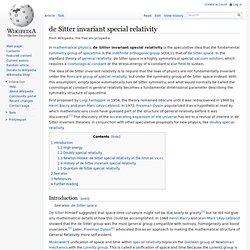 In the standard theory of general relativity, de Sitter space is a highly symmetrical special vacuum solution, which requires a cosmological constant or the stress–energy of a constant scalar field to sustain. The idea of de Sitter invariant relativity is to require that the laws of physics are not fundamentally invariant under the Poincaré group of special relativity, but under the symmetry group of de Sitter space instead. With this assumption, empty space automatically has de Sitter symmetry, and what would normally be called the cosmological constant in general relativity becomes a fundamental dimensional parameter describing the symmetry structure of spacetime. 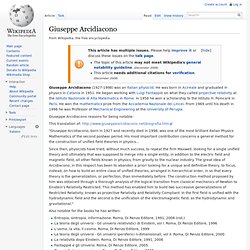 He was born in Acireale and graduated in physics in Catania in 1951. He began working with Luigi Fantappiè on what they called projective relativity at the Istituto Nazionale di Alta Matematica in Rome. In 1958 he won a scholarship to the Istituto H. Poincaré in Paris. He won the mathematics prize from the Accademia Nazionale dei Lincei. Giuseppe Arcidiacono reasons for being notable: This translation of: "Giuseppe Arcidiacono, born in 1927 and recently died in 1998, was one of the most brilliant Italian Physics Mathematics of the second postwar period.

Since then, physicists have tried, without much success, to repeat the firm Maxwell, looking for a single unified theory and ultimately that was supposed to merge into a single entity, in addition to the electric field and magnetic field, all other fields Known in physics, from gravity to the nuclear industry. Also notable for the books he has written: papers:

Luigi Fantappiè. Luigi Fantappiè (15 September 1901 – 28 July 1956) was an Italian mathematician, known for work in mathematical analysis and for creating the theory of analytic functionals: he was a student and follower of Vito Volterra. 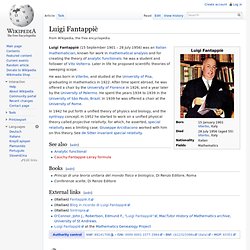 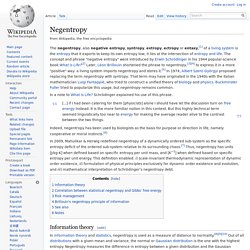 Schrödinger explained his use of this phrase. Indeed, negentropy has been used by biologists as the basis for purpose or direction in life, namely cooperative or moral instincts.[6] In 2009, Mahulikar & Herwig redefined negentropy of a dynamically ordered sub-system as the specific entropy deficit of the ordered sub-system relative to its surrounding chaos.[7] Thus, negentropy has units [J/kg-K] when defined based on specific entropy per unit mass, and [K−1] when defined based on specific entropy per unit energy. This definition enabled: i) scale-invariant thermodynamic representation of dynamic order existence, ii) formulation of physical principles exclusively for dynamic order existence and evolution, and iii) mathematical interpretation of Schrödinger's negentropy debt.

Exformation. Exformation (originally spelt eksformation in Danish) is a term coined by Danish science writer Tor Nørretranders in his book The User Illusion published in English 1998. 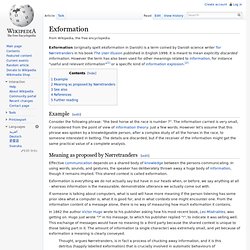 It is meant to mean explicitly discarded information. However the term has also been used for other meanings related to information, for instance "useful and relevant information"[1] or a specific kind of information explosion.[2] Example[edit] Consider the following phrase: "the best horse at the race is number 7". The information carried is very small, if considered from the point of view of information theory: just a few words. Meaning as proposed by Nørretranders[edit] Effective communication depends on a shared body of knowledge between the persons communicating.

Exformation is everything we do not actually say but have in our heads when, or before, we say anything at all - whereas information is the measurable, demonstrable utterance we actually come out with. Ishin-denshin. Ishin-denshin (以心伝心?) 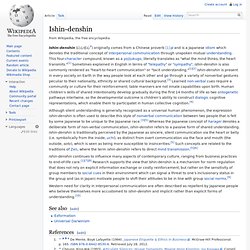 Originally comes from a Chinese proverb [1] and is a Japanese idiom which denotes the traditional concept of interpersonal communication through unspoken mutual understanding. This four-character compound, known as a yojijukugo, literally translates as "what the mind thinks, the heart transmits. "[1] Sometimes explained in English in terms of "telepathy" or "sympathy", ishin-denshin is also commonly rendered as "heart-to-heart communication" or "tacit understanding. Although silent understanding is generally recognized as a universal human phenomenon, the expression ishin-denshin is often used to describe this style of nonverbal communication between two people that is felt by some Japanese to be unique to the Japanese race.[3][5] Whereas the Japanese concept of haragei denotes a deliberate form of non-verbal communication, ishin-denshin refers to a passive form of shared understanding. Haragei. 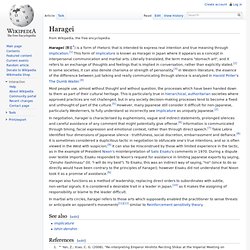 Is a form of rhetoric that is intended to express real intention and true meaning through implication.[1] This form of implicature is known as Haragei in Japan where it appears as a concept in interpersonal communication and martial arts. Literally translated, the term means "stomach art", and it refers to an exchange of thoughts and feelings that is implied in conversation, rather than explicitly stated.[2] In some societies, it can also denote charisma or strength of personality.[3] In Western literature, the essence of the difference between just talking and really communicating through silence is analyzed in Harold Pinter’s The Dumb Waiter.[4] Most people use, almost without thought and without question, the processes which have been handed down to them as part of their cultural heritage. Haragei also functions as a method of leadership, replacing direct orders to subordinates with subtle, non-verbal signals.