2012 May 1 - Higgs Boson Explained by Cartoon. Birth of Modern Physics Photo: History @ Los Alamos: Los Alamos National Lab. The primary responsibility of the Laboratory is assuring the safety and reliability of the nation's nuclear deterrent. 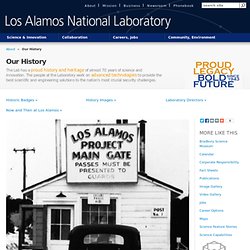 Though the world is rapidly changing, this essential responsibility remains the core mission. The people of Los Alamos continually work on advanced technologies to provide the United States with the best scientific and engineering solutions to many of the nation's most crucial challenges. Yesterday The Laboratory was established in 1943 as site Y of the Manhattan Project for a single purpose: to design and build an atomic bomb. It took just 20 months. Hitler was defeated in Europe, but the Japanese Empire continued to wage an aggressive Pacific war.

Today The Los Alamos of today has a heightened focus on worker safety and security awareness, with the ever-present core values of intellectual freedom, scientific excellence, and national service. Tomorrow. Happy Birthday, Electron. Electrons rule our world, but not so long ago they were only an idea. 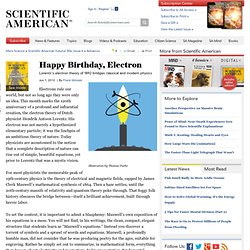 This month marks the 120th anniversary of a profound and influential creation, the electron theory of Dutch physicist Hendrik Antoon Lorentz. His electron was not merely a hypothesized elementary particle; it was the linchpin of an ambitious theory of nature. Today physicists are accustomed to the notion that a complete description of nature can rise out of simple, beautiful equations, yet prior to Lorentz that was a mystic vision. For most physicists the memorable peak of 19th-century physics is the theory of electrical and magnetic fields, capped by James Clerk Maxwell’s mathematical synthesis of 1864.

Then a haze settles, until the 20th-century massifs of relativity and quantum theory poke through. To set the context, it is important to admit a blasphemy: Maxwell’s own exposition of his equations is a mess. Now one had definite equations for the behavior of tiny bodies with specified mass and charge. How to Build a Black Hole. JST VIRTUAL SCIENCE CENTER. Modern physics. Classical physics is usually concerned with everyday conditions: speeds much lower than the speed of light, and sizes much greater than that of atoms. 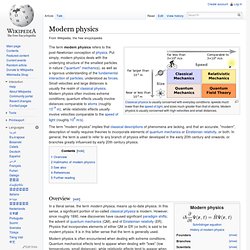 Overview[edit] In a literal sense, the term modern physics, means up-to-date physics. Hallmarks of modern physics[edit] See also[edit] References[edit] A. Modern Physics: An Historical Overview of the Development of Quantum Mechanics, Quantum Field Theory, Relativity, and Cosmology. This timeline is is a greatly expanded version of that presented in Wikipedia’s article on the history of quantum mechanics, with milestones in the development of Relativity, cosmology, and particle physics also included due to their overlap in attempts to construct a Theory of Everything (TOE). 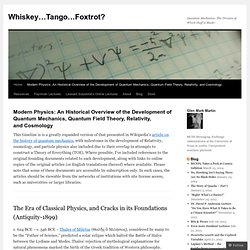 Where possible, I’ve included references to the original founding documents related to each development, along with links to online copies of the original articles (or English translations thereof) where available. Please note that some of these documents are accessible by subscription only. In such cases, the articles should be viewable from the networks of institutions with site license access, such as universities or larger libraries. The Era of Classical Physics, and Cracks in its Foundations (Antiquity-1899) c. 510 BCE – 428 BCE – Anaxagoras (Ἀναξαγόρας) brought philosophy to Athens, and considered matter as consisting of indestructible primary elements. Kepler’s Laws of Planetary Motion 1.

Scientists Discuss the Effects of a Geomagnetic Field Reversal. The end of the world as we know it could come in any number of ways, depending on who you ask. 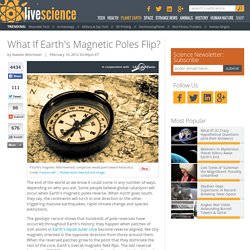 Some people believe global cataclysm will occur when Earth's magnetic poles reverse. When north goes south, they say, the continents will lurch in one direction or the other, triggering massive earthquakes, rapid climate change and species extinctions. The geologic record shows that hundreds of pole reversals have occurred throughout Earth's history; they happen when patches of iron atoms in Earth's liquid outer core become reverse-aligned, like tiny magnets oriented in the opposite direction from those around them. When the reversed patches grow to the point that they dominate the rest of the core, Earth's overall magnetic field flips. The last reversal happened 780,000 years ago during the Stone Age, and indeed there's evidence to suggest the planet may be in the early stages of a pole reversal right now. But should we really fear this event? Weak field Continental shifts?