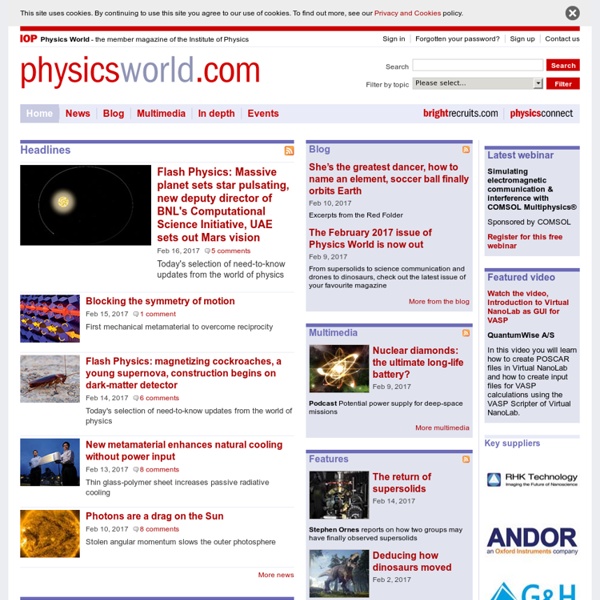 Math, Physics, and Engineering Applets Oscillations and Waves Acoustics Signal Processing Electricity and Magnetism: Statics Electrodynamics Cosmic ray / Gamma ray / Neutrino experiments This collection of links is provided in the hope that it will be useful both for the colleagues working in any of the fields covered by this collection as well as for non-experts who would like to find out what is happening in these fields. Although I try to be as comprehensive and as much up-to-date as possible, in particular in cosmic rays and gamma rays, such a collection can never be complete and some links may be out-dated or not functional. If you know of things which should be included in this collection, be modified in it, or be removed from it, please let me know.

Wired 11.04 The Bacteria Whisperer The Bacteria Whisperer Bonnie Bassler discovered a secret about microbes that the science world has missed for centuries. The bugs are talking to each other. Physics - Content by Unit The accelerators at Berkeley and Brookhaven were designed to accelerate protons. Physicists at Stanford University had a different idea: an electron accelerator. After all, they reasoned, the proton was not a fundamental particle. And because the electron appeared to have no substructure, it should make a cleaner probe. So Stanford designed and built several generations of linear electron accelerators, culminating in the Mark III accelerator, which grew to over 300 feet in length. Then in 1951 a diminutive firebrand named Wolfgang Panofsky arrived from Berkeley, after refusing to sign the McCarthy-era loyalty oath required by the state of California.

Physical Sciences Centre - Publications - Miscellaneous Miscellaneous Graduate Skills The HE Academy UK Physical Sciences Centre has been carrying out surveys over the last six months of Chemistry, Physics and Forensic Science graduates from universities in England, Scotland and Wales. The surveys, which were supported by the Royal Society of Chemistry, the Institute of Physics and the Forensic Science Society, were designed to identify which areas of the curriculum and generic skills are of particular value to new graduates and how well they were developed within the degrees. Skills required by new chemistry graduates

new philosophy to explain the universe Once dismissed as a relic of the Middle Ages, the spirit of metaphysical speculation is alive and well -- in computer science. Over candlelight in cathedrals and monkish cells, medieval metaphysicians quarreled over ultimate mysteries of reality, such as: What is the nature of God? Are there other universes besides ours? And could God create other universes, if He wished?