Listening for the Dark World of the Cosmos. Posted on May 14, 2019 “Dark photons in the dark sector is an analogy [to photons] in our visible world,” said associate physics professor Shih-Chieh Hsu with the University of Washington’s ADMX lab in their search for the axion particle, a hypothetical subatomic particle of low mass and a strong contender for the dark matter particle. 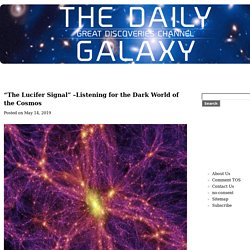 “Dark photons have a similar property as photons, except they only interact with dark matter and it can be massive. It mediates dark force between dark matter.” “Interestingly, axions were originally proposed as a solution to a different phenomenon observed in physics,” said UW Physics professor Leslie Rosenberg, lead scientist at ADMX. “It was later realized that their properties made them very strong dark matter candidates.” The imprint of structure on the cosmic microwave background only makes sense if dark matter isn’t made out of things that have protons and electrons in them. The Number of Galaxies Beyond the Observable Universe. Posted on Jan 12, 2019 According to current measurements, the size of the cosmos must be larger than a hundred billion light-years. 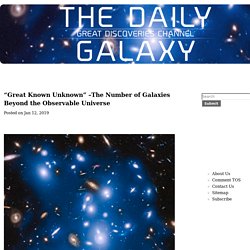 This is the order of magnitude of the universe we have indirect access to, writes physicist Carlo Rovelli. “It is around 1060 times greater than the Planck length, a number of times that is given by a 1 followed by sixty zeroes. Sciencealert. Cosmic Calendar. The Cosmic Calendar is a method to visualize the vast history of the universe in which its 13.8 billion year lifetime is condensed down into a single year. 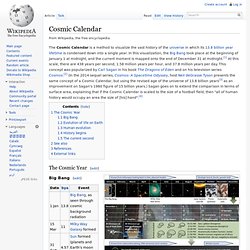 In this visualization, the Big Bang took place at the beginning of January 1 at midnight, and the current moment is mapped onto the end of December 31 at midnight.[1] At this scale, there are 438 years per second, 1.58 million years per hour, and 37.8 million years per day. This concept was popularized by Carl Sagan in his book The Dragons of Eden and on his television series Cosmos.[2] (In the 2014 sequel series, Cosmos: A Spacetime Odyssey, host Neil deGrasse Tyson presents the same concept of a Cosmic Calendar, but using the revised age of the universe of 13.8 billion years[3] as an improvement on Sagan's 1980 figure of 15 billion years.) The Cosmic Year[edit] The 13.8 billion year history of the universe mapped onto a single year, as popularized by Carl Sagan.

Big Bang[edit] "Could Contain Rich Physics and Potentially Complex Behavior" This is an approximately real-color image above from the Hubble Space Telescope, of galaxy cluster Abell 3827. 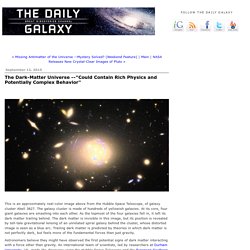 The galaxy cluster is made of hundreds of yellowish galaxies. At its core, four giant galaxies are smashing into each other. As the topmost of the four galaxies fell in, it left its dark matter trailing behind. The dark matter is invisible in this image, but its position is revealed by tell-tale gravitational lensing of an unrelated spiral galaxy behind the cluster, whose distorted image is seen as a blue arc.

Trailing dark matter is predicted by theories in which dark matter is not perfectly dark, but feels more of the fundamental forces than just gravity. This video using images from the NASA/ESA Hubble Space Telescope shows the rich galaxy cluster Abell 3827. Announces Results of Epic Space-Time Experiment. NASA Announces Results of Epic Space-Time Experiment May 4, 2011: Einstein was right again. 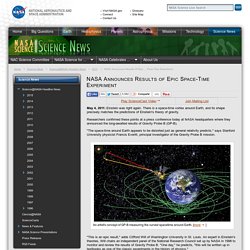 There is a space-time vortex around Earth, and its shape precisely matches the predictions of Einstein's theory of gravity. Researchers confirmed these points at a press conference today at NASA headquarters where they announced the long-awaited results of Gravity Probe B (GP-B). "The space-time around Earth appears to be distorted just as general relativity predicts," says Stanford University physicist Francis Everitt, principal investigator of the Gravity Probe B mission. "This is an epic result," adds Clifford Will of Washington University in St. Time and space, according to Einstein's theories of relativity, are woven together, forming a four-dimensional fabric called "space-time. " TheUniverse. Cosmic Ether-Drift and Dynamic Energy in Space. Cosmic Ether-Drift and Dynamic Energy in Space Bibliography and Resources If you are interested reviewing the original experimental publications on measuring the cosmic ether of space, or the ether-drift (or ether-wind as it is sometimes called), or methods for measuring the speed of light, then you have come to the right place. 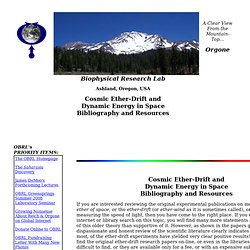 If you undertake an internet or library search on this topic, you will find many more statements and articles critical of this older theory than supportive of it. However, as shown in the papers gathered here, a dispassionate and honest review of the scientific literature clearly indicates that many, if not most, of the ether-drift experiments have yielded very clear positive results! Have fun, and Happy Ether-Drifting! James DeMeo, Ph.D. Articles on Ether-Drift Experiments, Organized Chronologically Many or Most Show Positive Results Download web links provided where known (please inform us if you know of other sources): * 1818: A. . * 1845: George G.