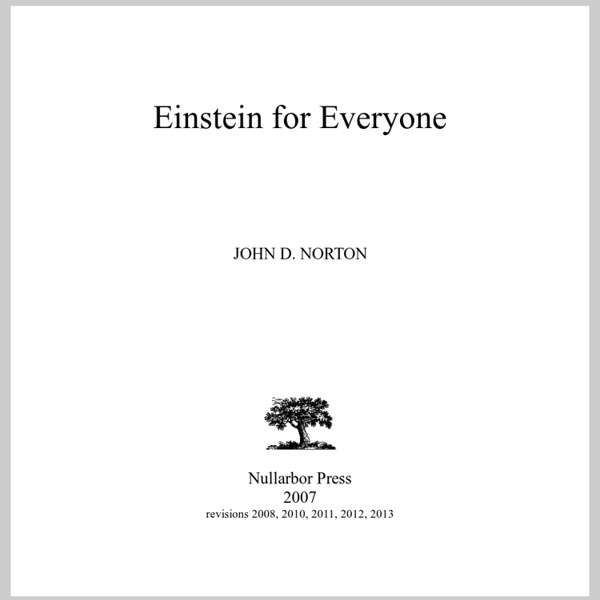 Einstein for Everyone Nullarbor Press 2007revisions 2008, 2010, 2011, 2012, 2013 Copyright 2007, 2008, 2010, 2011, 2012, 2013 John D. Norton Published by Nullarbor Press, 500 Fifth Avenue, Pittsburgh, Pennsylvania 15260 with offices in Liberty Ave., Pittsburgh, Pennsylvania, 15222 All Rights Reserved John D. An advanced sequel is planned in this series:Einstein for Almost Everyone 2 4 6 8 9 7 5 3 1 ePrinted in the United States of America no trees were harmed web*bookTM This book is a continuing work in progress. January 1, 2015. Preface For over a decade I have taught an introductory, undergraduate class, "Einstein for Everyone," at the University of Pittsburgh to anyone interested enough to walk through door. With each new offering of the course, I had the chance to find out what content worked and which of my ever so clever pedagogical inventions were failures. At the same time, my lecture notes have evolved. This text owes a lot to many. i i i

Match Stick Rocket Match Stick Rocket SUBJECT: Rocketry TOPIC: Propulsion Gravitation Gravitation, or gravity, is a natural phenomenon by which all physical bodies attract each other. It is most commonly recognized and experienced as the agent that gives weight to physical objects, and causes physical objects to fall toward the ground when dropped from a height. During the grand unification epoch, gravity separated from the electronuclear force. Gravity is the weakest of the four fundamental forces, and appears to have unlimited range (unlike the strong or weak force). What Is Science? From Feynman to Sagan to Asimov to Curie, an Omnibus of Definitions by Maria Popova “The most beautiful experience we can have is the mysterious — the fundamental emotion which stands at the cradle of true art and true science.” “We live in a society absolutely dependent on science and technology,” Carl Sagan famously quipped in 1994, “and yet have cleverly arranged things so that almost no one understands science and technology. That’s a clear prescription for disaster.”

Brief Answers to Cosmic Questions Structure of the Universe Does the Universe have an edge, beyond which there is nothing? Are the galaxies arranged on the surface of a sphere? Why can't we see the whole universe? Elementary Concepts in Statistics In this introduction, we will briefly discuss those elementary statistical concepts that provide the necessary foundations for more specialized expertise in any area of statistical data analysis. The selected topics illustrate the basic assumptions of most statistical methods and/or have been demonstrated in research to be necessary components of our general understanding of the "quantitative nature" of reality (Nisbett, et al., 1987). We will focus mostly on the functional aspects of the concepts discussed and the presentation will be very short. Further information on each of the concepts can be found in statistical textbooks. Recommended introductory textbooks are: Kachigan (1986), and Runyon and Haber (1976); for a more advanced discussion of elementary theory and assumptions of statistics, see the classic books by Hays (1988), and Kendall and Stuart (1979).

Physics envy In science, the term physics envy is used to criticize a tendency (perceived or real) of softer sciences and liberal arts to try to obtain mathematical expressions of their fundamental concepts, as an attempt to move them closer to harder sciences, particularly physics. Evolutionary biologist Ernst Mayr discusses the issue of the inability to reduce biology to its mathematical basis in his book What Makes Biology Unique?.[2] Noam Chomsky discusses the ability and desirability of reduction to its mathematical basis in his article "Mysteries of Nature: How Deeply Hidden Einstein field equations The Einstein field equations (EFE) or Einstein - Hilbert equations are a set of 10 equations in Albert Einstein's general theory of relativity which describe the fundamental interaction of gravitation as a result of spacetime being curved by matter and energy.[1] First published by Einstein in 1915[2] as a tensor equation, the EFE equate local spacetime curvature (expressed by the Einstein tensor) with the local energy and momentum within that spacetime (expressed by the stress–energy tensor).[3] As well as obeying local energy-momentum conservation, the EFE reduce to Newton's law of gravitation where the gravitational field is weak and velocities are much less than the speed of light.[4] Exact solutions for the EFE can only be found under simplifying assumptions such as symmetry. Special classes of exact solutions are most often studied as they model many gravitational phenomena, such as rotating black holes and the expanding universe.

Quadratic Equations: Quadratic Formula Consider the general quadratic equation with . First divide both sides of the equation by a to get which leads to Alcubierre Warp Drive Time Travel An Alcubierre Warp Drive stretches spacetime in a wave causing the fabric of space ahead of a spacecraft to contract and the space behind it to expand. The ship can ride the wave to accelerate to high speeds and time travel. The Alcubierre drive, also known as the Alcubierre metric or Warp Drive, is a mathematical model of a spacetime exhibiting features reminiscent of the fictional "warp drive" from Star Trek, which can travel "faster than light" (although not in a local sense - see below).

Friedmann equations and pressure . The equations for negative spatial curvature were given by Friedmann in 1924.[2] Assumptions[edit] Graphs Of Wikipedia: Influential Thinkers The internet is big — very big. One such way to investigate all of this free online content is through graphs. The network visualisations by Simon Raper in his fantastic post about graphing the history of philosophy is one example of how to exploit such data. Let’s take this a step further and create a series of graphs using everyone on Wikipedia.