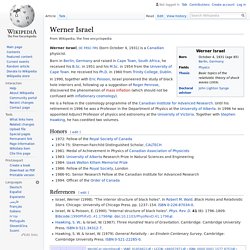 Born in Berlin, Germany and raised in Cape Town, South Africa, he received his B.Sc. in 1951 and his M.Sc. in 1954 from the University of Cape Town. He received his Ph.D. in 1960 from Trinity College, Dublin. Gravity. Frontier of Physics: Interactive Map. “Ever since the dawn of civilization,” Stephen Hawking wrote in his international bestseller A Brief History of Time, “people have not been content to see events as unconnected and inexplicable.

They have craved an understanding of the underlying order in the world.” In the quest for a unified, coherent description of all of nature — a “theory of everything” — physicists have unearthed the taproots linking ever more disparate phenomena. With the law of universal gravitation, Isaac Newton wedded the fall of an apple to the orbits of the planets. Albert Einstein, in his theory of relativity, wove space and time into a single fabric, and showed how apples and planets fall along the fabric’s curves.

And today, all known elementary particles plug neatly into a mathematical structure called the Standard Model. Our map of the frontier of fundamental physics, built by the interactive developer Emily Fuhrman, weights questions roughly according to their importance in advancing the field. Colored Fire Flames. A campfire is magical. 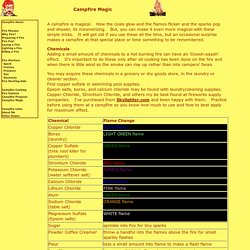 How the coals glow and the flames flicker and the sparks pop and shower, its mesmerizing. But, you can make it even more magical with these simple tricks. 10 fun things you can do to play with fire. Non-Newtonian Liquid In Super Slow-Motion Is Very Weird. Supersonic Stereo. Zombie Physics: 6 Baffling Results That Just Won't Die. When a scientific result seems to show something genuinely new, subsequent experiments are supposed to either confirm it—triggering a textbook rewrite—or show it to be a measurement anomaly or experimental blunder. 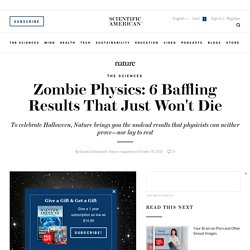 But some findings seem to remain forever stuck in the middle ground between light and shadow. Even efforts to replicate these results—normally science’s equivalent of Valyrian steel—have little effect. Magnetic Wormhole Created in Lab. Ripped from the pages of a sci-fi novel, physicists have crafted a wormhole that tunnels a magnetic field through space. 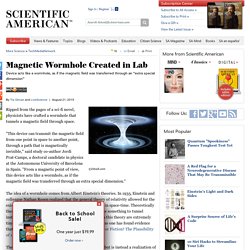 "This device can transmit the magnetic field from one point in space to another point, through a path that is magnetically invisible," said study co-author Jordi Prat-Camps, a doctoral candidate in physics at the Autonomous University of Barcelona in Spain. "From a magnetic point of view, this device acts like a wormhole, as if the magnetic field was transferred through an extra special dimension. " The idea of a wormhole comes from Albert Einstein's theories. In 1935, Einstein and colleague Nathan Rosen realized that the general theory of relativity allowed for the existence of bridges that could link two different points in space-time. Quantum "Spookiness" Passes Toughest Test Yet. John Bell devised a test to show that nature does not 'hide variables' as Einstein had proposed. 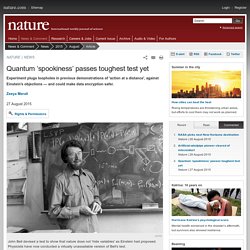 Physicists have now conducted a virtually unassailable version of Bell's test. It’s a bad day both for Albert Einstein and for hackers. The most rigorous test of quantum theory ever carried out has confirmed that the ‘spooky action at a distance’ that the German physicist famously hated — in which manipulating one object instantaneously seems to affect another, far away one — is an inherent part of the quantum world. The experiment, performed in the Netherlands, could be the final nail in the coffin for models of the atomic world that are more intuitive than standard quantum mechanics, say some physicists. It could also enable quantum engineers to develop a new suite of ultrasecure cryptographic devices.

Scientific American Reports. Does a Multiverse Fermi Paradox Disprove the Multiverse? - Life, Unbounded - Scientific American Blog Network. Having just orbited our way through another summer solstice, it feels like time to let slip some more speculative ideas before the hot days of the northern hemisphere shorten too much again and rational thinking returns. 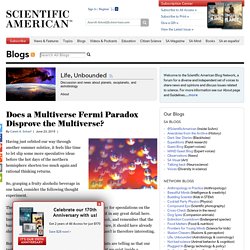 So, grasping a fruity alcoholic beverage in one hand, consider the following thought experiment. Chart 2006 4. Color. Red green blue Color is a function of the human visual system, and is not an intrinsic property. 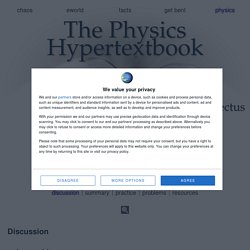 Objects don't "have" color, they give off light that "appears" to be a color. How Fuzzballs Solve the Black Hole Firewall Paradox. In the late 18th century, the scientist John Michell pondered what would happen if a star were so massive, and its gravity so strong, that its escape velocity would be equivalent to the speed of light. 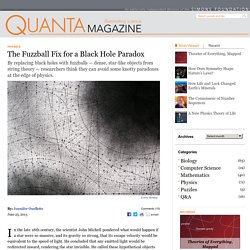 He concluded that any emitted light would be redirected inward, rendering the star invisible. He called these hypothetical objects dark stars. Michell’s 1784 treatise languished in quiet obscurity until it resurfaced in the 1970s. By then, theoretical physicists were well acquainted with black holes — the dark star idea translated into Albert Einstein’s theory of gravity. Black holes have a boundary called an event horizon that represents the point of no return, as well as a singularity, a point of infinite density within. Yet Einstein’s description of the world is inconsistent with quantum mechanics, driving physicists to seek a complete theory of quantum gravity to reconcile the two. The genesis and renaissance of general relativity. As described in Pedro Ferreira’s book “The Perfect Theory”, after its development by Albert Einstein about a 100 years ago, and the subsequent big splash of its vindication by Eddington’s observations of stars near to the Sun during an eclipse, the general theory of relativity went into a bit of a lull, becoming something of a backwater. 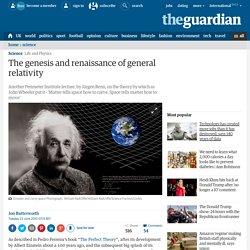 It answered the fundamental questions in physics that it was intended for, and the equations supported some interesting solutions, but the theory did not develop. Unusually for a great breakthrough in science, it did not seem to lead on to further exciting questions and phenomena, especially when contrasted with quantum theory, which was bursting out all over.

Superfast Lasers Create A Hologram You Can Touch. 10 Reasons Why Tesla Is a Scientific God" 2 Futures Can Explain Time's Mysterious Past. Weak Nuclear Force Shown to Give Asymmetry to the Biochemistry of Life. Notjustnut/Getty Life is made largely of molecules that are different than their mirror images. Physicists have found hints that the asymmetry of life — the fact that most biochemical molecules are ‘left-handed’ or ‘right-handed’ — could have been caused by electrons from nuclear decay in the early days of evolution. In an experiment that took 13 years to perfect1, the researchers have found that these electrons tend to destroy certain organic molecules slightly more often than they destroy their mirror images. Many organic molecules, including glucose and most biological amino acids, are ‘chiral’.

This means that they are different than their mirror-image molecules, just like a left and a right glove are. Many scientists think that the choice was simply down to chance. Let's Get Small: A Panel on Nanoscience. Steve Mirsky: Welcome to Scientific American's Science Talk, posted on October 15, 2014. I'm Steve Mirsky, and joining me from our Washington DC bureau is Scientific American's senior editor Josh Fischman.

Hi Josh. Josh Fischman: Hi Steve. Steve Mirsky: Josh, tell me what we are about to hear. Is Light a Wave or a Particle? It’s in your physics textbook, go look. It says that you can either model light as an electromagnetic wave OR you can model light a stream of photons. You can’t use both models at the same time. It’s one or the other. It says that, go look. Here is a likely summary from most textbooks. 1. Quantum Entanglement Creates New State of Matter. What Should We Do with Our Visions of Heaven—and Hell? The views expressed are those of the author and are not necessarily those of Scientific American. Is heaven real? Cocktail Party Physics, Scientific American Blog Network.

The views expressed are those of the author and are not necessarily those of Scientific American. It’s that time of year, when we all look back over 2014 and reflect on all the cool science stuff that happened. Today, Jen-Luc Piquant has compiled her Top 20 physics-themed videos of 2014 — with the caveat that not all of them were actually created in 2014. But we discovered them this year, and that’s sufficient to meet our criteria. Look for posts in the next week on our top physics books and favorite physics papers of 2014. Golden Ratio. The Idea Behind It. Adolf Zeising. Adolf Zeising (24 September 1810 – 27 April 1876) was a German psychologist, whose main interests were mathematics and philosophy.

Higgs boson. The Higgs boson is named after Peter Higgs, one of six physicists who, in 1964, proposed the mechanism that suggested the existence of such a particle. Imaginary time. Spacetime symmetries. Spacetime. Minkowski space. In theoretical physics, Minkowski space is often contrasted with Euclidean space. Time dilation. How Special Relativity Works" Do we live in the Matrix? researchers say they have found a way to prove if we do. The Complete Idiot’s Guide to String Theory. What is String Theory ?