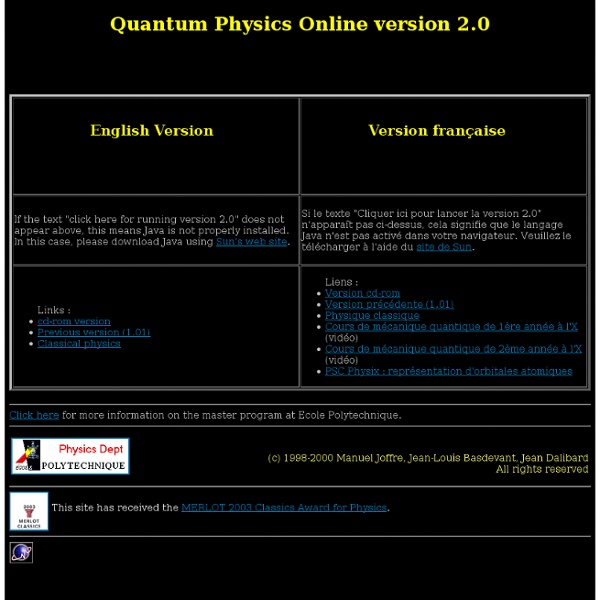 Special Relativity Special Relativity These pages are ok as far as they go, but they are missing the planned highlight, to show you what things actually look like when you travel at near the speed of light. I hope to have the opportunity to develop these pages further as time permits. Beginning and End of the Universe July 26, 2010 § Universe History * The diagram below outlines the major Eras of the Universe according to the Big Bang Theory. Click the picture for many more details and a larger image. The one line in the article that caught my attention the most was at the end. On Pauli and the Interconnectedness of all things There's been some argument on twitter and elsewhere as to whether Brian Cox made a mistake in his excellent "Night with the Stars" earlier this year. Apart from some below-the-line nonsense in blog comments, it's an interesting physics discussion and it made me refine my own thoughts about quantum mechanics a bit. So I feel like writing about it.

Big Bang Abandoned in New Model of the Universe July 29, 2010 § This is one of the most exciting theories I have heard in a long time. I am going to tell you why and you are going to think I am even nuttier than you already do. But, as you know, I don’t care. One night after watching some documentary about Stephen Hawking and the black hole wars, I was lying in bed just contemplating the Universe. Quantum Diaries We’ve been discussing the Higgs (its interactions, its role in particle mass, and its vacuum expectation value) as part of our ongoing series on understanding the Standard Model with Feynman diagrams. Now I’d like to take a post to discuss a very subtle feature of the Standard Model: its chiral structure and the meaning of “mass.” This post is a little bit different in character from the others, but it goes over some very subtle features of particle physics and I would really like to explain them carefully because they’re important for understanding the entire scaffolding of the Standard Model. My goal is to explain the sense in which the Standard Model is “chiral” and what that means. In order to do this, we’ll first learn about a related idea, helicity, which is related to a particle’s spin.

"Twistor" Theory Reignites the Latest Superstring Revolution: Sc In the late 1960s the renowned University of Oxford physicist and mathematician Roger Penrose came up with a radically new way to develop a unified theory of physics. Instead of seeking to explain how particles move and interact within space and time, he proposed that space and time themselves are secondary constructs that emerge out of a deeper level of reality. But his so-called twistor theory never caught on, and conceptual problems stymied its few proponents. Like so many other attempts to unify physics, twistors were left for dead. In October 2003 Penrose dropped by the Institute for Advanced Study in Princeton, N.J., to visit Edward Witten, the doyen of today’s leading approach to unification, string theory.

Quantum electrodynamics In particle physics, quantum electrodynamics (QED) is the relativistic quantum field theory of electrodynamics. In essence, it describes how light and matter interact and is the first theory where full agreement between quantum mechanics and special relativity is achieved. QED mathematically describes all phenomena involving electrically charged particles interacting by means of exchange of photons and represents the quantum counterpart of classical electromagnetism giving a complete account of matter and light interaction. History[edit] The first formulation of a quantum theory describing radiation and matter interaction is attributed to British scientist Paul Dirac, who (during the 1920s) was first able to compute the coefficient of spontaneous emission of an atom.[2]