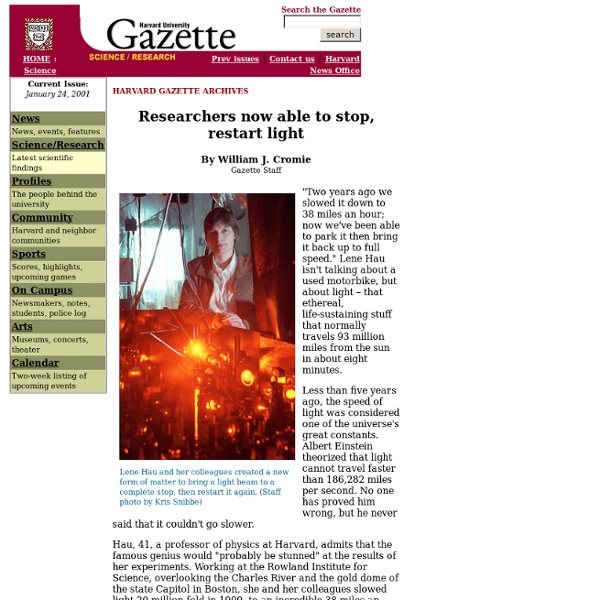 By William J. Cromie Gazette Staff "Two years ago we slowed it down to 38 miles an hour; now we've been able to park it then bring it back up to full speed." Lene Hau isn't talking about a used motorbike, but about light – that ethereal, life-sustaining stuff that normally travels 93 million miles from the sun in about eight minutes. Less than five years ago, the speed of light was considered one of the universe's great constants. Albert Einstein theorized that light cannot travel faster than 186,282 miles per second. Hau, 41, a professor of physics at Harvard, admits that the famous genius would "probably be stunned" at the results of her experiments. "It's nifty to look into the chamber and see a clump of ultracold atoms floating there," Hau says. She and her team continued to tweak their system until they finally brought light to a complete stop. "We didn't have much contact," she notes, "just a few e-mails." Stopping cold Hau and her group then figured out a way to make it work.

Is Dark Energy Really "Repulsive Gravity"? In 1998 scientists discovered that the universe is not only expanding but that its expansion is accelerating. This totally unexpected behavior has been called the "most profound problem" in physics , because our current understanding of gravity says that attractions between mass in the universe should be causing the expansion to slow down. The leading theory to explain the accelerating expansion is the existence of a hypothetical repulsive force called dark energy. (Related: "New Galaxy Maps to Help Find Dark Energy Proof?"

Otomata 16 Jul 2011 Click on the grid below to add cells, click on cells to change their direction, and press play to listen to your music. Update: Click here to get Otomata for your iPhone / iPod / iPad! Element 113: Ununtrium Reportedly Synthesized In Japan By: Clara Moskowitz, LiveScience Senior Writer Published: 09/26/2012 11:06 AM EDT on LiveScience Scientists in Japan think they've finally created the elusive element 113, one of the missing items on the periodic table of elements. Element 113 is an atom with 113 protons in its nucleus — a type of matter that must be created inside a laboratory because it is not found naturally on Earth. Heavier and heavier synthetic elements have been created over the years, with the most massive one being element 118, temporarily named ununoctium.

Physics Flash Animations We have been increasingly using Flash animations for illustrating Physics content. This page provides access to those animations which may be of general interest. The animations will appear in a separate window. Designer High @DesignerHigh.com Kravin Glass, located in Colorado, creates some of the most unique and intricate glass pipes on the market. The examples we’ve featured below are some of their finest, but you can find several more examples on their homepage, including videos of their creation. Unique glass pipes with evolving shapes and styles. Image credits: Kravin Glass Scientists find molecular switch that controls skin growth Scientists have discovered a regulator of gene activity that tells epidermal stem cells when it”s time to grow more skin, as well as a “crowd control” molecule that can sense cell crowding and turn the growth off. The study, in mice and in human cancer cells, provides clues to new therapeutic strategies for cancer, particularly squamous cell carcinoma, the second most common skin cancer, in which epidermal cell growth is inappropriately turned on. The findings could also aid efforts to grow skin grafts and treat burn patients. Image: Cell Press “We have found a molecular switch that tells your skin to keep growing or stop growing,” said Fernando Camargo at Children’s Hospital Boston. Camargo and colleagues manipulated a molecule called Yap1 to cause massive tumor growth by triggering a pathway known as Hippo.

Math, Physics, and Engineering Applets Oscillations and Waves Acoustics Signal Processing Electricity and Magnetism: Statics Electrodynamics Quantum Mechanics How To… Embed This Infographic <a href= ‎"><img src=" title="10 How Tos" alt="How To Infographic" border="0" class="nopin" /></a><br />Source: <a href=' title='Interesting Facts'><a href=' title='Interesting Facts'>Today I Found Out</a></a> 1) How to drastically increase the life of your shaving razor Before or after you shave (I prefer before so that the blades are dry), place your jeans on a hard flat surface; then run the razor up the pant legs about 10-15 times quickly; then repeat running it down the pant legs 10-15 times quickly. No need to press that hard, but a little pressure is necessary. necessary.

String Theorists Squeeze Nine Dimensions Into Three A simulation of the early universe using string theory may explain why space has three observable spatial dimensions instead of nine. The leading mathematical explanation of physics goes beyond modern particle theory by positing tiny bits of vibrating string as the fundamental basis of matter and forces. String theory also requires that the universe have six or more spatial dimensions in addition to the ones observed in everyday life.

Higgs Running Out Of Hiding Places Even as physicists in Europe close in on their most-wanted quarry — a particle known as the Higgs boson — scientists in Illinois are helping narrow the hunt. New measurements of a different particle, one called the W boson, confirm the Higgs is in the mass range that most physicists had thought. Theory suggests that the Higgs particle must exist in order to imbue many other particles with mass. Unusual Words Unusual Words A by no means exhaustive list of rare, obscure, strange and sometimes funny words and their meanings that only seem to crop up in crosswords and dictionaries. Words that are used so seldom, you wonder who invented them and why. Home ~ The Stories ~ Diversions ~ Links ~ Contact

World's Top Scientists Ponder: What If The Whole Universe Is, Like, One Huge Atom? PALO ALTO, CA—Gathering for what members of the international science community are calling "potentially the most totally out-to-lunch freaky head trip since Einstein postulated that space and time were, like, curved and shit," a consortium of the world's top physicists descended upon Stanford University Monday to discuss some of the difficult questions facing the cutting edge of theoretical thinking. Cal Tech physicist Dr. Jonathan Friedrich postulates a bunch of freaky shit that makes his colleagues' heads spin right the hell off.

What You'll Wish You'd Known January 2005 (I wrote this talk for a high school. I never actually gave it, because the school authorities vetoed the plan to invite me.) When I said I was speaking at a high school, my friends were curious. What will you say to high school students? Artists, Physicists, Mathematicians and Philosophers Contemplate Infinity As I stepped into the Infinity Environment on Wednesday morning (Feb. 1), I heard faint gasps from those around me. With apprehension, we entered a stark white, brilliantly lit room with no edges. The curved walls and angled lighting minimized shadows, giving the illusion that we were staring into a continuum. With no visual reference points anywhere in the room, my eyes flickered about, desperate for something to focus on; it was impossible to tell how far space extended, if at all. In seeming infinite, space ceased to exist beyond my eyelashes and nose. "There is no other time in your life when you will look out and see nothing at all," one young woman, an art student, whispered.