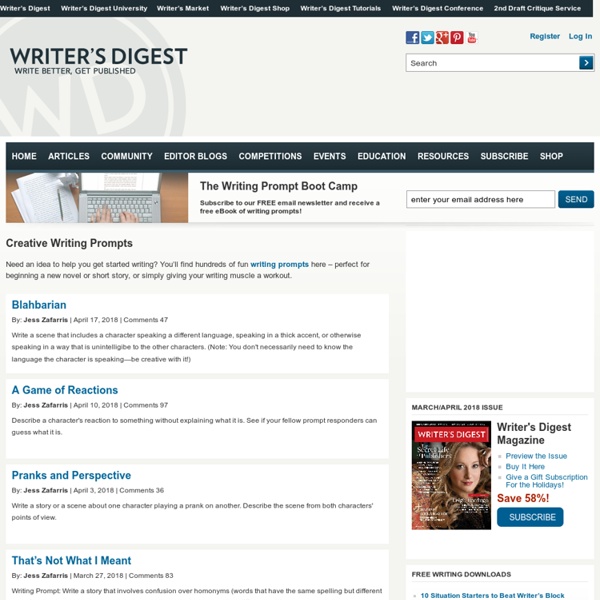 Write a scene that includes a character speaking a different language, speaking in a thick accent, or otherwise speaking in a way that is unintelligibe to the other characters. (Note: You don't necessarily need to know the language the character is speaking—be creative with it!) Describe a character's reaction to something without explaining what it is. See if your fellow prompt responders can guess what it is. Write a story or a scene about one character playing a prank on another. Describe the scene from both characters' points of view. Writing Prompt: Write a story that involves confusion over homonyms (words that have the same spelling but different meanings) or homophones (words that sound the same but are spelled differently). For World Storytelling Day, share the best story you've ever heard or told by word of mouth, or have a fictional character recount their favorite story. You're making your way down a cobbled street when a stocky, red-bearded man beckons you into an alley.

Educational Technology and Mobile Learning: Excellent Story Writing Apps for Students July 31, 2015 Below is a short collection of some interesting iPad apps students can use to help them with their writing and more specifically, outlining, drafting and writing stories. Some of these apps are featured here for the first time but for more options on digital storytelling apps check out this page. 1- The Brainstormer

Text Structure Text Structure The term “text structure” refers to how information is organized in a passage. The structure of a text can change multiple times in a work and even within a paragraph. Students are often required to identify text structures on state reading tests; therefore, it is important that they are given exposure to the various patterns of organization. This page will briefly explain seven commonly used patterns of organization, provide examples, and then offer users free text structure worksheets and interactive online practice activities to help students learn this essential reading skill. Cause and Effect:The results of something are explained.Example: The dodo bird used to roam in large flocks across America. Spectacular Moleskine Doodles Explode with Energy - My Modern Met Philippines-based illustrator Kerby Rosanes proves that doodling can be so much more than scratching unintelligible scribbles on paper. Through his Sketchy Stories blog, Rosanes shares his wonderful world of doodling in a simple Moleskine sketchbook. Equipped with an ordinary Moleskine, a few Uni Pin drawing pens, and his innate gift for drawing, the artist is able to transport viewers to a world where tiny, cartoonish creatures explode with gusto to make up larger entities. Each of the illustrator's complex and crowded sketches are filled with minute details that allow the eye to wander and discover new characters and designs at every turn.

Six Amazing Websites that Make Your Writing Stronger Long writing activities are not very frequently done in class. I tend to think that my students are like me; I need the right kind of atmosphere. Writing requires time, silence and lots of inspiration. Ideally, at this time of the year, I would probably wish to be sitting next to a fireplace with the most perfect instagrammable snow falling outside my window while drinking a nice cup of coffee waiting for inspiration to strike. Unfortunately, there isn’t any snow where I live so I’ll have to make do with a bit of rain and some reddish trees. Note: you won’t find “instagrammable” in the dictionary

Spelling Bee What are the different ways to play the Visual Thesaurus Spelling Bee? There are two different ways to play. In the Tournament Spelling Bee, you'll be challenged by a series of words, with the spelling difficulty adapted to your skill level. The more words you get right, the higher your score will go, on a scale from 200 to 800. You can compete against other spellers, since we keep track of high scores (with streaks of correct answers serving as tiebreakers). You can also try a Community Spelling Bee generated from one of our subscribers' word lists.