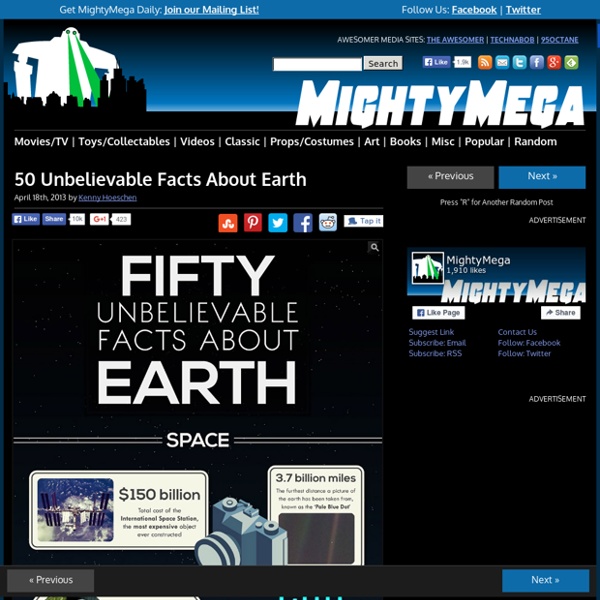 Neomammalian Studios, a UK based infographics agency, put together this infographic containing 50 facts about planet Earth that you probably won’t believe. We had no idea that the largest meteor ever to fall to earth left no crater, that there is as much ice in Antarctica as there is water in the Atlantic Ocean, that bacteria have been found alive 1.7 miles below the Earth’s surface, and that only 14% of Earth’s species have been identified to date. Now test your knowledge for a chance to win some great prizes!!! Stumped? You can scroll back up, then scroll back down to reveal the entry form again. Enter now to win a $200 Amazon Gift Card plus the BBC's complete Human Planet Series on Blu-ray!

▶ One Direction - What Makes You Beautiful (5 Piano Guys, 1 piano) - ThePianoGuys We're on Tour! Sheet Music: Album here: song here: Subscribe to our main channel: to our BTS channel: us on Facebook: us on Twitter: Stunning Infographics and Data Visualization Feb 02 2010 Information graphics, or infographics, are visual representations of information, data or knowledge. The graphics are used where complex information needs to be explained quickly and clearly, such as on signs and maps and in journalism, technical writing and education.

11 cheap gifts guaranteed to impress science geeks Science comes up with a lot of awesome stuff, and you don't need a Ph.D, a secret lab, or government funding to get your hands on some of the coolest discoveries. We've got a list of 11 mostly affordable gifts that are guaranteed to blow your mind, whether or not you're a science geek. Click on any image to see it enlarged. Hyper-realistic Sculptures are Made Entirely of Wood by Tom Eckert Artist and Professor Tom Eckert uses traditional processes to carve these hyper-realistic sculptures of everyday objects entirely made of wood. He uses plenty of carpentry techniques in his creative sculptured pieces, such as constructing, bending, laminating, carving and painting. After receiving his M.F.A. degree from Arizona State University, Eckert began teaching at the university. He has exhibited his work in over 150 national and international exhibitions. Recently his incredible artwork has been featured in the Netherlands after getting lot of appreciation throughout the United States.

12 Enjoyable Names for Relatively Common Things Fancy yourself a logophile ... and didn't have to look up "logophile"? See if you know these 12 words for common things. 1. The plastic table-like item found in pizza boxes is called a box tent and was patented in 1983. Most people in the biz now call it a pizza saver. 2. International Networks Archive \\ Remapping Our World The following six maps deal with an array of major current world issues, from the serious to the seriously frivolous. They were developed for the INA by Jonathan Harris of Flaming Toast Productions. The maps may not be reproduced or rebroadcast without express written consent of the INA. Eye Tricks There is a trick you can do with your eyes in order to subliminally influence a person. It's described a few paragraphs below. But most of the techniques covered here are about how to watch for reactions in people's eyes in order to gain some insight into what's happening in their minds. So let's look at what you can determine from watching someone else's eyes. I start with obvious yet under-utilized clues...

A4 Papercuts Ogni scultura cartacea realizzata dall’artista Peter Callesen ha un unico punto di partenza: un candido e standardizzato foglio formato A4. Quello che accade dopo il “trattamento Callesen” lo potete vedere con i vostri occhi. Uccelli in procinto di spiccare il volo, scheletri che prendono vita… “The negative and absent 2 dimensional space left by the cut, points out the contrast to the 3 dimensional reality it creates, even though the figures still stick to their origin without the possibility of escaping“. 40 Maps They Didn’t Teach You In School By the time we graduate high school, we learn that they never taught us the most interesting things in there. Sure, you might be able to name the European countries or point New York on the map, but does that give a you real understanding of how the world functions? To fill this gap, we have gathered a great and informative selection of infographical maps that they should’ve shown us at school: every single one of these maps reveals different fun and interesting facts, which can actually help you draw some pretty interesting conclusions. Show Full Text

The Way to Personal Branding Personal Branding is something that a person does to better market themselves and their careers. This includes defining who you are by finding your skills and passions, establishing how (as a person) you are perceived by others (via personal relationships, professional relationships, and your online reputation) and finally by defining what you want to achieve. This Infographic created by sestyle goes through the whole process step by step to get you on your way to establishing a personal brand for yourself. **Please note that Enfuzed is not responsible for any typographical errors or incorrect information given in any infographics posted on enfuzed.com** About the Author Enfuzed is a web and graphic design blog.

How To Fathom Pi: Amazing Visual Illustrations Distribution of the first 123,201 digits of π mapped onto a red-yellow-blue Brewer palette and placed as circles on an Archimedean spiral by Martin Krzywinski Pi is, quite possibly, the most famous number known to man.* This fact is a little bit ironic, as we don’t actually have a number for pi. Well, not a complete number anyways, because pi never ends. If you try to pin it down to the decimal, you can’t do it—the decimal representation goes on endlessly, and it never settles into a repeating patters. Hence, all the fame.