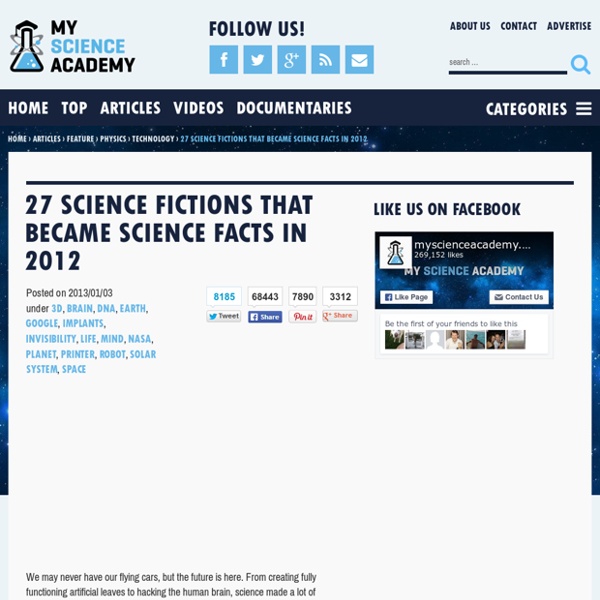 We may never have our flying cars, but the future is here. From creating fully functioning artificial leaves to hacking the human brain, science made a lot of breakthroughs this year. 1. Quadriplegic Uses Her Mind to Control Her Robotic Arm At the University of Pittsburgh, the neurobiology department worked with 52-year-old Jan Scheuermann over the course of 13 weeks to create a robotic arm controlled only by the power of Scheuermann’s mind. The team implanted her with two 96-channel intracortical microelectrodes. 2. Once the robot figures out how to do that without all the wires, humanity is doomed. 3. Photo Courtesy of Indigo Moon Yarns. At the University of Wyoming, scientists modified a group of silkworms to produce silk that is, weight for weight, stronger than steel. 4. Using an electron microscope, Enzo di Fabrizio and his team at the Italian Institute of Technology in Genoa snapped the first photos of the famous double helix.Source: newscientist.com / via: davi296 5. 6. 7. 8. 10.

AI Is Transforming Google Search. The Rest of the Web Is Next Yesterday, the 46-year-old Google veteran who oversees its search engine, Amit Singhal, announced his retirement. And in short order, Google revealed that Singhal’s rather enormous shoes would be filled by a man named John Giannandrea. On one level, these are just two guys doing something new with their lives. But you can also view the pair as the ideal metaphor for a momentous shift in the way things work inside Google—and across the tech world as a whole. Giannandrea, you see, oversees Google’s work in artificial intelligence.

The Neiling II House About 30 miles outside of Berlin, Germany the landscape gets a tad rural and monotonous. However, the rugged wilderness setting in this part of the country gave architect Peter Grundmann the chance to create a forest-dwelling that was both minimal in style but contemporary in form; suited to blend in with the landscape, not detract from its surroundings. Dubbed the House Neiling II, it’s comprised totally from glass and wood, including a beautiful glass facade, a handful of homemade furniture and a custom bathroom and kitchen thanks to Grundmann’s collaboration with Thomas Pohl.

Why the mantis shrimp is awesome. They all look the same to me SCORE 109 That escalated quickly SCORE 111 Weird Al Magic Trick SCORE 116 Mexican proverb SCORE 110 Tumblr Gets Deep (21 Pics Around three o’clock in the morning, the night bloggers come out to take their shift on Tumblr. And then things get weird… via via via via Did a hyper-black hole spawn the Universe? The event horizon of a black hole — the point of no return for anything that falls in — is a spherical surface. In a higher-dimensional universe, a black hole could have a three-dimensional event horizon, which could spawn a whole new universe as it forms. It could be time to bid the Big Bang bye-bye. Cosmologists have speculated that the Universe formed from the debris ejected when a four-dimensional star collapsed into a black hole — a scenario that would help to explain why the cosmos seems to be so uniform in all directions. The standard Big Bang model tells us that the Universe exploded out of an infinitely dense point, or singularity.

5D Quartz Coin Can Store All Human History for 14 Billion Years By Jake Anderson Nicknamed the “Superman memory crystal,” a new storage device made of nanostructured glass can archive 360 terabytes worth of information for billions of years. Created by scientists at the University of Southampton using femtosecond laser writing, the sliver of fused quartz coin can withstand temperatures up to 157 degrees Celsius (350 degrees Fahrenheit). It is an example of 5D optical data storage. The research team from the University’s Optoelectronics Research Center first experimentally tested the technology in 2013. The final iteration encodes files in five dimensions (size, orientation + 3 dimensional position of nanostructures), writing with ultrafast, intense pulses of light.

Deus Ex Machina Ago TT Any fan of motorcycle culture has heard of the Tourist Trophy racing days of the 1960’s and ‘70s. And we’ll bet those same individuals remember the name of Giacomo Agostini, winner of 13 Grand Prix championships and 10 Isle of Man TT’s during that time frame. Now, in conjunction with MV Agusta, Deus Ex Machina introduces The Ago TT, a tribute to commemorate such a golden era of motorcycle racing, and the riders who competed with style. At first glance, you’ll notice this bike was built specifically for the track. A Modern Pop-Up Children's Storybook That Uses Augmented Reality Australia-based Resin is a company that has recently developed a modern pop-up book using augmented reality. By taking an existing storybook, “Two Left Feet”, they have brought it to life using 3D animation and augmented reality. To experience the fun, one does not need to own the storybook.You are also able to print out images to experience the same augmented reality.

20 Animals You Won't Believe Actually Exist. One of Them Will Haunt You Forever. - Funniest Pics on the Internet - PicStache Posted Apr 24, by Val Liarikos The Red-Lipped Batfish walks around the bottom of the ocean floor walking on its fins. Yes, these things can walk. The Peacock Mantis Shrimp can deliver a punch that is just as powerful as a gunshot. You can't keep them in a normal aquarium because they will punch your other fish and even the tank's glass. The world's most awesome igloo. Pegman vs. Clippy. SCORE 141 Clever wall art. SCORE 125 Scientists Developing Directed Energy Laser Weapon "Death Star" to Destroy Asteroids By Piper McGowin Didn’t Tesla think of this first? A team at University of California is working on a planetary defense project they’ve dubbed the “De-Star” — Direct Energy System for Targeting Asteroids and exploRation (they apparently had to work really hard for the final “R” in that nickname there). Sounds like Ronald Reagan’s Star Wars program… or just the movie Star Wars. The laser weapon would be used to protect planet Earth from rogue asteroids by vaporizing them. A smaller version would fly alongside asteroids and provide a last line of defense should the object make a run toward Earth.

Pan Speed Shop Meka Motorcycle Sometimes, when people decide to open up a custom vehicle shop – motorcycle, car, or otherwise – it can take years of planning and work to get off the ground. And that can mean that a viable product won’t be released for at least that amount of time or more. That wasn’t the case with Pan Speed Shop out of Madrid. This Spanish firm, born from the minds and experience of Pedro Garica-Tapia and Efraón Triana, was just formed in June of 2016, but they’ve already released their first project, The Pan Meka Motorcycle, and it is a thing to behold. Based on a BMW K1200S this bike has been stripped of the original plastic body, instead featuring a custom-designed exhaust and raw steel plates fitted onto the frame.

How One Teacher Turned Sixth Grade Into An MMO Editor’s Note: Ben Bertoli is a long-time Kotaku reader and commenter, a lifetime, dedicated video gamer and a sixth-grade teacher in Indiana. He reached out to Kotaku this past week to share the story of how he turned his class into a role-playing game. The enthusiasm and motivation of the children in Bertoli’s class evoke the success stories seen in gamified experiences such as Fitocracy. Here, Bertoli explains his creation, ClassRealm, how it works and what motivated him to develop it. Video games and education.

Related:  Sources of Information • Science • Across Content
Related:  Technology   -  inspiration   -  The Future Of Things | Science and Technology of Tomorrow   -  Science Friday   -  Ubiquitous computing - Wikipedia, the free encyclopedia   -  prosthetic knowledge   -  Science World British Columbia   -  10 Ways the Next 10 Years Are Going To Be Mind-Blowing | High Existence   -  Smithsonian Channel: It's Brighter Here   -  AAAS Science Assessment ~ Home   -  One Sentence Memebombs Database   -  Above And Beyond - YouTube   -  some rules i try to live by:   -  My Super-Charged Life | Good Habits for a Great Life!   -  Inspiration Lives Here   -  Fake it Till You Make it: 10 Ways to Feel Confident (Even When You Aren’t) | PickTheBrain | Motivation and Self Improvement   -  30 Books I’m Glad I Read Before 30   -  Bethany Mota - YouTube   -  The saddest thing I've ever heard on an airplane - The Oatmeal   -  tumblr_lviaemh2ET1r2n011o1_500.jpg (JPEG Image, 474 × 700 pixels)   -  101 Simple Truths We Often Forget   -  Sir Ken Robinson - Leading a Learning Revolution - YouTube   -  Upworthy: Because we’re all part of the same story.   -  15 Things You Should Give Up To Be Happy   -  Bookshelf Porn   -  Do you have a high energy, challenging, persistent child?   -  CircleUp | Creating a transparent and efficient market to drive innovation for consumer brands   -  Zentips   -  Fundable | Crowdfunding for Small Businesses   -  20 Things I Should Have Known at 20   -  (Images) 56 Inspirational Picture Quotes That Will Motivate Your Mind | Addicted 2 Success   -  List of Free Science Books   -  Sustainia100 | Solutions | Sustainia   -  Education Rethink @edrethink: 11 Reasons Teachers Aren't Using Technology #edchat #edtech   -  12 Tough Truths that Help You Grow   -  Chinese Proverbs   -  77 Creative Ways to Lighten Up In Tough Times | The Bold Life   -  99U - Empowering the Creative Community