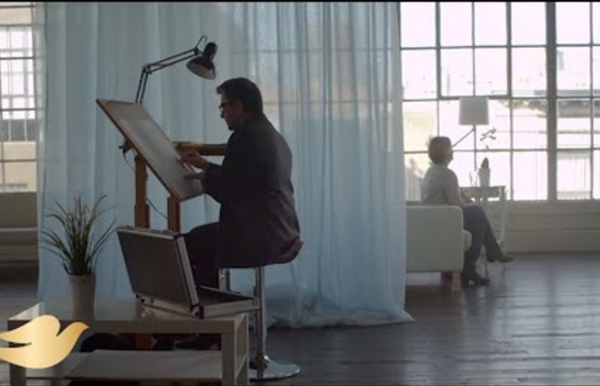 Plastic Surgery Disaster: Powerful Animation About Trying to Obtain "Female Perfection" - 10 Daily Things This disturbing, powerful and eye-opening animation, “Supervenus” by Frédéric Doazan doesn’t mince… meat with getting its message across, does it? In it, a female anatomical drawing goes for plastic surgery. She is cut up, given botox and liposuction, and is finally transformed into a blonde bombshell. The procedures do not stop there, however, and take on nightmarish proportions.This animation is painful to watch—it documents the pressure that women face as they feel like they have to look a certain way, as well as their love-hate relationship with their bodies.

From Marketing to Fashion, ‘The Glitch’ Has Become One of Today’s Defining Design Trends – Adweek The visual crackle of a struggling video stream is a frustration to most, but clearly an inspiration to others. Known as “the glitch,” the visual of a pixelated or off-register image has firmly become part of modern design culture, defining the newest chapter in the art world’s eternal fascination with distress, deconstruction and the eerie beauty of imperfection. At a brief presentation on design trends at Advertising Week New York, stock art service Shutterstock illustrated how glitch designs have permeated almost every aspect of culture in 2017, from marketing campaigns and magazine covers to product design and fashion.

Martin Niemöller: "First they came for the socialists..." Introduction Martin Niemöller was born in the Westphalian town of Lippstadt, Germany, on January 14, 1892. In 1910 he became a cadet in the Imperial German Navy. Run That Town The Australian Bureau of Statistics was looking for ways to get people more engaged with Census data to help them understand why the data matters and how it can help guide planning and policy decisions. But most people don’t get a chance to make those kind of decisions. To them, the Census data can just seem like so many numbers. Instead of trying to tell Australians how much this data matters, our goal was to create an accessible and engaging way they could use that data for themselves. We created a mobile game that lets people take charge of their actual suburb – using the real Census data from their town. We took the data from every postal area in Australia and turned it into a mobile game.

The ‘Active Shooter’ Is Never Far Away Photo Thirty-two hours after Omar Mateen began murdering people with a Sig Sauer MCX rifle at Pulse nightclub in Orlando, Fla. — the deadliest mass shooting in modern American history — an entrepreneur named Jeffrey Isquith arrived at the Merchandise Mart in Chicago, a cavernous Art Deco building overlooking the Chicago River, for the NeoCon trade show, which bills itself as “North America’s most important design exposition and conference for commercial interiors.” The show would bring the official debut of a product that his company, Ballistic Furniture Systems, had been developing for five years: bullet-­resistant panels that could be fitted inside chairs, cubicles and doors.

This Gorgeous Ad From Diesel Is Packed With Flaws, and It Regrets Nothing – Adweek There’s a gritty, glamorous, give-no-fucks beauty about not only being imperfect … but flaunting it with abandon. That’s the refreshing message behind “Go With the Flaw,” a short film created by Publicis Italia for Diesel. You’ve got sweaty bodies, incomplete roads, roughed-up cars, poorly cut film. And amid all that, there’s a menagerie of weird human beauty—freckled bodies with faded tattoos, braces, unibrows with a hint of lady ‘stache (à la Frida), spasmodic movement, cross-eyed women. It’s all framed in a world that perhaps suits the times—corroded, crumbling, riddled with poverty. Red dresses bring missing, murdered aboriginal women to forefront Empty red dresses sway from trees and hang in hallways on the University of Saskatchewan campus. Students say they give the campus a haunting vibe. “I was walking on campus and noticed all these red dresses.

Perrier Secret Place Perrier believes that drinking water at a party is the best way to not miss a single thing. After all – when you are more aware, you experience more. Perrier Secret Place is an immersive digital experience that lets you live the ultimate party you've always dreamed of. Through a 90-minute film that works like a video game, users are invited to experience the perspective of 60 different characters – experiencing the party not just through one point of view, but 60 wild fantasies.

The psychology of narcissism - W. Keith Campbell Interested in learning more on narcissism? Here are the abstracts for two good papers: Narcissism at the crossroads: Phenotypic description of pathological narcissism across clinical theory, social/personality psychology, and psychiatric diagnosis and Grandiose and vulnerable narcissism: A nomological network analysis. These papers describing vulnerable and grandiose narcissism can be found on Google scholar or at your local university library. The clinical description of narcissistic personality can be found in the . But, for a quick overview, there are web resources like those found at the Mayo Clinic website or at this Medscape link.

Elizabeth Olsen and Winona Ryder Are Set to Tango in H&M Video It's time to break out the dancing shoes. H&M released its spring 2018 campaign Monday, with a video featuring Elizabeth Olsen, model Imaan Hammam and none other than Winona Ryder. If the famed scene from The Devil Wears Prada comes to mind—"Florals?