Why Does God Allow Pain and Suffering? With anything so viscerally devastating, the Christian community has long tried to explain it. 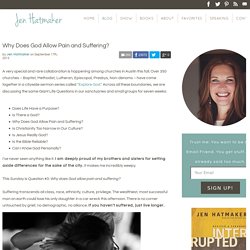 At the beginning of the written word, we see this tension: Job has suffered in ways incomprehensible leaving a wake of crushing confusion. God tells us it was Satan, Job tells us it was God, his friends tell Job it was him. In inconsolable times … Examen. A story of a girl, a boy, and ‘that voice’ Luke 1:26–38 No one ever listens to girls. 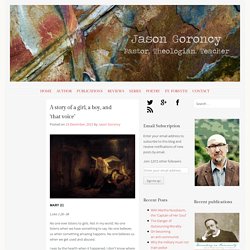 O Come O Come Emmanuel Matt Maher. The Christmas Revolution. Photo BECAUSE the Christmas story has been told so often for so long, it’s easy even for Christians to forget how revolutionary Jesus’ birth was. 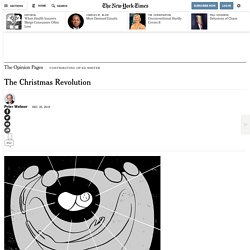 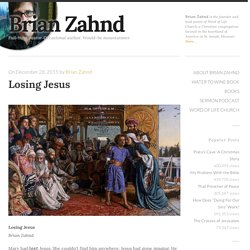 She couldn’t find him anywhere. Jesus had gone missing. Women in the World - Journal. "If Jesus & Holy Week were Covered by 24 Hour Cable News" by Nathan Roberts - The Salt Collective. All too often, the speed of the 24 hour news machine reduces complex stories to bite size talking points. 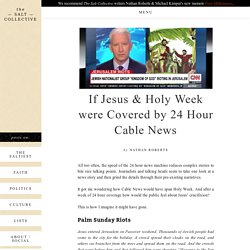 Journalists and talking heads seem to take one look at a news story and then grind the details through their pre-existing narratives. It got me wondering how Cable News would have spun Holy Week. And after a week of 24 hour coverage how would the public feel about Jesus’ crucifixion? This is how I imagine it might have gone. Palm Sunday Riots Jesus entered Jerusalem on Passover weekend. The Deer's Cry. The False Gospel of Gender Binaries. Not long ago I had the pleasure of working with Adrian,* a visual artist with a quick wit, easygoing spirit, and creative eye. 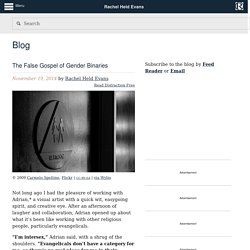 After an afternoon of laugher and collaboration, Adrian opened up about what it’s been like working with other religious people, particularly evangelicals. “I’m intersex,” Adrian said, with a shrug of the shoulders. “Evangelicals don’t have a category for me, so there’s no real place for me in their church.” (Intersex is a term used for a variety of conditions in which a person is born with a reproductive or sexual anatomy that doesn’t seem to fit the typical definitions of female or male. Learn more here.) Adrian’s words hurt my heart, but I knew they were true. “God made male and female,” culture warriors like to thunder. Even the Vatican reinforced this message this week in an international forum on marriage where “complementarity between man and woman in marriage” was described by Pope Francis as “the root of marriage and family.”

Who are we to judge? How Scripture and tradition help to form our consciences. At the gathering of the Synod of Bishops in October 2015, church leaders discussed a wide range of challenges facing modern families, including—though not limited to—sensitive questions around Communion for divorced and remarried Catholics, contraception and same-sex marriage. 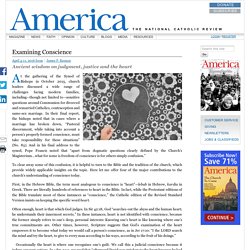 In their final report, the bishops noted that in cases where a marriage has broken down, “Pastoral discernment, while taking into account a person’s properly formed conscience, must take responsibility for these situations” (No. 85). And in his final address to the synod, Pope Francis noted that “apart from dogmatic questions clearly defined by the Church’s Magisterium…what for some is freedom of conscience is for others simply confusion.” To clear away some of this confusion, it is helpful to turn to the Bible and the tradition of the church, which provide widely applicable insights on the topic.

Here let me offer four of the major contributions to the church’s understanding of conscience today. Tradition Today. Top 10 takeaways from “Amoris Laetitia” Pope Francis’s groundbreaking new document “Amoris Laetitia” (“The Joy of Love”) asks the church to meet people where they are, to consider the complexities of people’s lives and to respect people’s consciences when it comes to moral decisions. 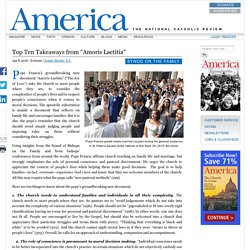 The apostolic exhortation is mainly a document that reflects on family life and encourages families. But it is also the pope’s reminder that the church should avoid simply judging people and imposing rules on them without considering their struggles. Using insights from the Synod of Bishops on the Family and from bishops’ conferences from around the world, Pope Francis affirms church teaching on family life and marriage, but strongly emphasizes the role of personal conscience and pastoral discernment.

He urges the church to appreciate the context of people’s lives when helping them make good decisions. The goal is to help families—in fact, everyone—experience God’s love and know that they are welcome members of the church. Understanding discernment is key to understanding “Amoris Laetitia” One word that occurs repeatedly in Pope Francis’s new apostolic exhortation on the family and love is “discernment.” 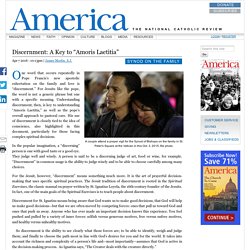 For Jesuits like the pope, the word is not a generic phrase but one with a specific meaning. Understanding discernment, then, is key to understanding “Amoris Laetitia,” as well as the pope’s overall approach to pastoral care. His use of discernment is closely tied to the idea of conscience, also highlighted in this document, particularly for those facing complex spiritual decisions. April Maskiewicz on the “E” Word. I watched a fantastic TEDx talk this weekend by Dr. 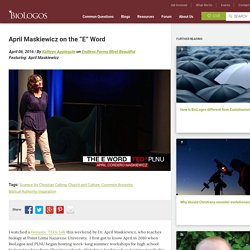 April Maskiewicz, who teaches biology at Point Loma Nazarene University. I first got to know April in 2010 when BioLogos and PLNU began hosting week-long summer workshops for high school biology teachers from Christian schools. Watching April teach and interact with the teachers in the program impressed upon me how rare it is to encounter people who understand and communicate well about evolutionary biology. April does both and more: Because she herself has had to wrestle with how to reconcile evolution and Christian faith, she cares deeply about—and is gifted at—addressing the objections her students raise about evolution. April begins her talk with a personal introduction: “I’m an evangelical Christian, and by that I mean I view the Bible as God’s revelation and Jesus as my savior, and I’m a biologist that embraces evolution, that all life on earth shares a common ancestor, including humans.” “The Bible was written by men with Daddy issues,” says atheist scholar. John Dickson responds.

INTERVIEWS | Tess HolgateMonday 2 May 2016 Jonah was *not* swallowed by a fish, there was *never* an exodus, and Moses *never* existed, according to atheist and biblical scholar Professor Francesca Stavrakopoulou (a Professor of Hebrew Bible and Ancient Religion in the Theology and Religion department at Exeter University) who appeared on The Weekly on Wednesday evening, making outrageous claims about the Bible.

Do you see this woman?: a preaching commentary on rape culture, Bathsheba, and the use of grace. Jason Goroncy.