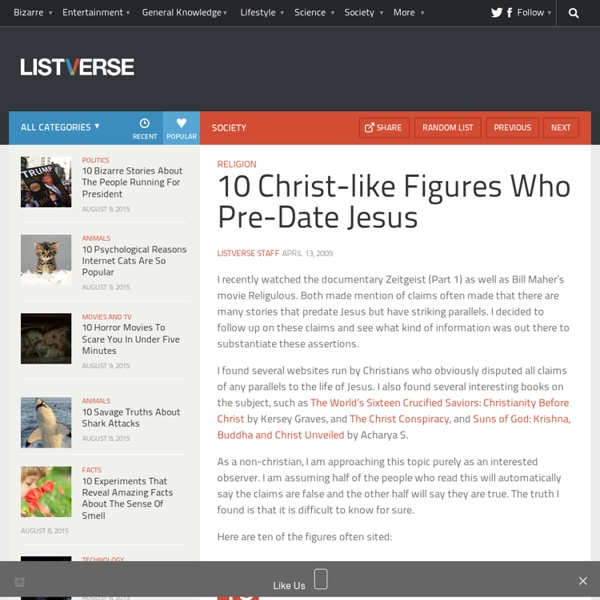 Religion I recently watched the documentary Zeitgeist (Part 1) as well as Bill Maher’s movie Religulous. Both made mention of claims often made that there are many stories that predate Jesus but have striking parallels. I decided to follow up on these claims and see what kind of information was out there to substantiate these assertions. I found several websites run by Christians who obviously disputed all claims of any parallels to the life of Jesus. As a non-christian, I am approaching this topic purely as an interested observer. Here are ten of the figures often sited: Both went to their temples at the age of twelve, where they are said to have astonished all with their wisdom. “When he [Buddha] went again to the garden he saw a monk who was calm, tranquil, self–possessed, serene, and dignified. Jesus responded: “…begone, Satan!” Homeric tales about Odysseus emphasize his suffering life, just as in Mark Jesus said that he, too, would suffer greatly. Born of a virgin, Isis. Related:  Christianity

The Christ of India Essene roots of Christianity At the time of Jesus of Nazareth there were two major currents or sects within Judaism: the Pharisees and the Sadducees. The Pharisees were extremely concerned with strict external observance of their interpretation of the Mosaic Law, ritual worship, and theology. There was also a third sect which both was and was not part of Judaism. Jesus of Nazareth was an Essene, as were most of his followers, including the twelve Apostles. Their claims about their very existence was certainly a controversial matter. The reality of this contact with India is shown in the Zohar (2:188a-b), a compilation of ancient Jewish mystical traditions and the major text of the Jewish Kabbalah. “Rabbi Yose and Rabbi Hiyya were walking on the road. Their contact and interchange with Indian religion–Brahminical practices in particular–were manifested in several ways among the Essenes: 1. 2. 3. 4. 5. 6. 7. 8. 9. 10. 11. 12. 13. 14. 15. 16. 17. The History of Isha Messiah–Jesus the Christ

Teach the Controversy - Intelligently designed t-shirts urging you to show both sides of every story, even the really, really dumb sides. by Jeremy Kalgreen The Lost Years of Jesus in Tibet « Tibet Talk The undocumented portion of Jesus’s early life, popularly known as “The Lost Years of Jesus, have aroused many questions about Jesus of Nazareth’s whereabouts and activities during this period. “The Lost Years of Jesus” are generally said to comprise of Jesus’s life after 12 years of age and prior to 30 years of age. These years have been suitably labeled the “Lost Years” since there has been no biblical or middle eastern/western records of Jesus’s activities during this period to date. However in 1887 Nicolas Notovitch (pictured in right), a Russian aristocrat and journalist, traveled to an ancient Tibetan monastery in Himis, north of Srinagar in Kashmir, and discovered and translated ancient Buddhist scripts which spoke of a Saint Issa (a transliteration of the word Jesus), a man who had traveled from Israel to the lands of India, Persia, Tibet (in the Ladakh area of Kashmir) and many others. “Issa [Jesus] is a great prophet, one of the first after the twenty-two Buddhas. Sources:

Data from 22,000+ Horoscopes Shows True Nature of Astrology There have been a lot of studies on the subject of horoscopes, astrology, and astrological predictions in general and as Wikipedia so succinctly tells us: “Studies have repeatedly failed to demonstrate statistically significant relationships between astrological predictions and operationally defined outcomes.” In short, when put to the scientific test horoscopes succeed as much as chance alone in predicting whatever parameter they are purported to predict. Of course, believers in Astrology usually repeat the same old tired explanations for the inability of science to confirm astrological predictions. These include a lack of scientific equipment or theory capable of measuring or understanding the mystery of astrology, and of course simple lack of belief. As former JREF President and Bad Astronomer Phil Plait has pointed out many a time and in great detail: “Astrology is wrong.” “Whatever the situation or secret moment, enjoy everything a lot. Trackback(0)

Early Christian Writings: New Testament, Apocrypha, Gnostics, Church Fathers Celsus According to the Christian father Origen, Celsus (/ˈsɛlsəs/; Greek: Κέλσος) was a 2nd-century Greek philosopher and opponent of Early Christianity. He is known for his literary work, The True Word (Account, Doctrine or Discourse) (Λόγος Ἀληθής), which survives exclusively in Origen's quotations from it in Contra Celsum. This work, c. 177[1] is the earliest known comprehensive attack on Christianity. Work[edit] According to Origen, Celsus was the author of an anti-Christian work titled The True Word (Alēthēs logos). Celsus seems to have been interested in Ancient Egyptian religion,[5] and he seemed to know of Jewish logos-theology, both of which suggest The True Word was composed in Alexandria.[6] Celsus wrote at a time when Christianity was being allegedly persecuted[7] and when there seems to have been more than one emperor.[8][9][10][11][12] As an anti-Christian Greek philosopher, Celsus mounted an attack on Christianity. O light and truth! Origen wrote his refutation in 248.

crucifixion reason kill the god you disagree with 8 Ways Christian Fundamentalists Make People Convert -- to Agnosticism or Atheism May 27, 2012 | Like this article? Join our email list: Stay up to date with the latest headlines via email. If the Catholic bishops, their conservative Protestant allies , and other right-wing fundamentalists had the sole objective of decimating religious belief, they couldn’t be doing a better job of it. Testimonials at sites like ExChristian.net show that people leave religion for a number of reasons, many of which religious leaders have very little control over. But if you read ExChristian testimonials you will notice that quite often church leaders or members do things that either trigger the deconversion process or help it along. Here are some top ways Christians push people out the church door or shove secret skeptics out of the closet. 1. Ignorant and mean-spirited attitudes about homosexuality don’t drive just gays out of the church, they are a huge deconversion issue for straight friends and family members. 2.