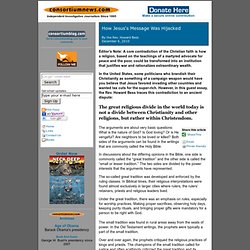 Bush's presidency since 2007 Bush - Second Term George W. George W. Who Is Bob Gates? Bush Bests Kerry Gauging Powell's reputation. Recounting the controversial campaign. Is the national media a danger to democracy? Behind President Clinton's impeachment. Pinochet & Other Characters. Rev. Contra drug stories uncovered America's tainted historical record The 1980 election scandal exposed. From free trade to the Kosovo crisis. Editor’s Note: A core contradiction of the Christian faith is how a religion, based on the teachings of a martyred advocate for peace and the poor, could be transformed into an institution that justifies war and rationalizes extraordinary wealth. In the United States, some politicians who brandish their Christianity as something of a campaign weapon would have you believe that Jesus favored invading other countries and wanted tax cuts for the super-rich.

Science and History in the Bible. What Would Jesus Do? Reprinted from: (Click here for author information.)

What Would Jesus Do? Advocate child abuse and murder amongst many other cruelties. Christians are always claiming, “he’s the lamb”, “our savior”, “the king of peace”, “the embodiment of love”, amongst the many other names they associate with a loving, merciful nature. Jesus a nice guy? Jesus says that he has come to destroy families by making family members hate each other. Jesus says, “Don’t imagine that I came to bring peace on earth! Families will be torn apart because of Jesus. Jesus strongly approves of the law and the prophets. Jesus advocates murder and death: Jesus condemns entire cities to dreadful deaths and to the eternal torment of hell because they didn’t care for his preaching. Jesus, whose clothes are dipped in blood, has a sharp sword sticking out of his mouth. The beast and the false prophet are cast alive into a lake of fire. Jesus explains why he speaks in parables to confuse people so they will go to hell. Even If I DID Believe ... - net.religion.

I am not a Christian. 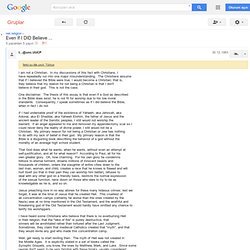 In my discussions of this fact with Christians, Ihave repeatedly run into one major misunderstanding. The Christians assumethat if I believed the Bible were true, I would become a Christian; that is,they believe that my reason for not being a Christian is that I don'tbelieve in their god. This is not the case. One disclaimer: The thesis of this essay is that even if a God as describedin the Bible does exist, he is not fit for worship due to his low moralstandards. Consequently, I speak sometimes as if I did believe the Bible,when in fact I do not. If I had undeniable proof of the existence of Yahweh, aka Jehovah, akaAdonai, aka El Shaddai, aka Yahweh Elohim, the father of Jesus and theancient leader of the Semitic peoples, I still would not worship thebastard.

That God does what he wants, when he wants, without even an attempt atself-justification, and all for what reason? Well, get ready to start reviling then. I could go on for quite a while in this vein. Even If I DID Believe ... [Great Usenet post from 1983] : atheism. Original Sin in the Bible: A Christian Creation and Imposition on the Jewish Scriptures. The first mention of the concept of Original Sin is found, not in Genesis, where the fatal event was supposed to happen, but in the fifth chapter of Romans, written by Paul. 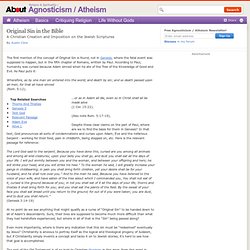 According to Paul, humanity was cursed because Adam sinned when he ate of the Tree of the Knowledge of Good and Evil. As Paul puts it: Wherefore, as by one man sin entered into the world, and death by sin; and so death passed upon all men, for that all have sinned (Rom. 5:12)....or as in Adam all die, even so in Christ shall all be made alive (1 Cor. 15:22). (Also note Rom. 5:17-19). Despite these clear claims on the part of Paul, where are we to find the basis for them in Genesis? The Lord God said to the serpent, Because you have done this, cursed are you among all animals and among all wild creatures; upon your belly you shall go, and dust you shall eat all the days of your life. At no point do we see anything that might qualify as a curse of “Original Sin” to be handed down to all of Adam’s descendants.