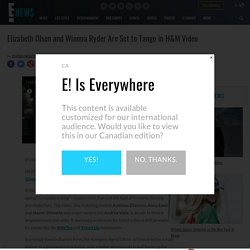 H&M released its spring 2018 campaign Monday, with a video featuring Elizabeth Olsen, model Imaan Hammam and none other than Winona Ryder. If the famed scene from The Devil Wears Prada comes to mind—"Florals? For spring? Groundbreaking"—expect more than just the typical feminine, flowing wardrobe fare. The video, also featuring models Andreea Diaconu, Anna Ewers and Naomi Shimada and singer-songwriter Andrea Valle, is an ode to female empowerment and unity. In a sleepy town in Buenos Aires, the Avengers: Age of Ultron actress is led by a male dancer in a passionate-less dance, until another woman cuts in and livens up the place.

Courtesy H & M "It was such a thrill to be in Buenos Aires for the H&M Spring campaign, and more importantly, to be surrounded by such a wonderful cast of strong women. The city comes alive with dancers in wide-leg trousers, billowy blouses with embroidery, asymmetrical hems and cascading ruffles. Making-of CHANEL’s GABRIELLE bag animated film featuring Cara Delevingne. CHANEL’s GABRIELLE bag animated film with Cara Delevingne (Director’s cut) In Macau with G-Dragon for CHANEL's GABRIELLE bag campaign. Marilyn et N°5 - Inside CHANEL. Best Job - P&G - Olympic Games 2012 London (Beautiful Commercials) John Lewis - The Bear & The Hare. EF - Live The Language - Paris. This Gorgeous Ad From Diesel Is Packed With Flaws, and It Regrets Nothing – Adweek. There’s a gritty, glamorous, give-no-fucks beauty about not only being imperfect … but flaunting it with abandon. 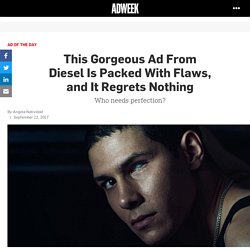 That’s the refreshing message behind “Go With the Flaw,” a short film created by Publicis Italia for Diesel. You’ve got sweaty bodies, incomplete roads, roughed-up cars, poorly cut film. And amid all that, there’s a menagerie of weird human beauty—freckled bodies with faded tattoos, braces, unibrows with a hint of lady ‘stache (à la Frida), spasmodic movement, cross-eyed women. It’s all framed in a world that perhaps suits the times—corroded, crumbling, riddled with poverty. And the person Scotch-taping every last scene into place has a surprising flaw of his own.

As kids, we read a book about how to be perfect. Yet it’s the pursuit of perfection that drives so much of the advertising in high fashion, even when it’s trying to be quirky. In contrast, “Go With the Flaw” is the story of a half-blind editor making his first film, composed of the world he’s in. From Marketing to Fashion, ‘The Glitch’ Has Become One of Today’s Defining Design Trends – Adweek.

The visual crackle of a struggling video stream is a frustration to most, but clearly an inspiration to others. 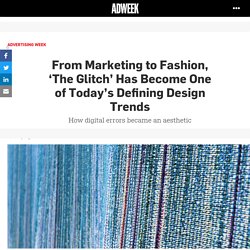 Known as “the glitch,” the visual of a pixelated or off-register image has firmly become part of modern design culture, defining the newest chapter in the art world’s eternal fascination with distress, deconstruction and the eerie beauty of imperfection. At a brief presentation on design trends at Advertising Week New York, stock art service Shutterstock illustrated how glitch designs have permeated almost every aspect of culture in 2017, from marketing campaigns and magazine covers to product design and fashion.

"There’s a controlled imperfection to it, and it's a reminder of the technical elements of design. It visualizes technology as having a combination of textures and patterns but without perfection. " -Terrence Morash, creative director, Shutterstock The glitch trend was one of several predicted by Shutterstock in its annual Creative Trends outlook. Million – Bombas. MADE.COM - Made You Look. Google - Meet The Google App. Fitbit Charge 2 – Big Day. Billtrust. Fugue. Squarespace Websites: How to tie the knot. Build it Beautiful - Apothecary. Build it Beautiful - The Greater Goods. Build it Beautiful - Yield. Chaos Theory - You Can't Script This (WSL Official)