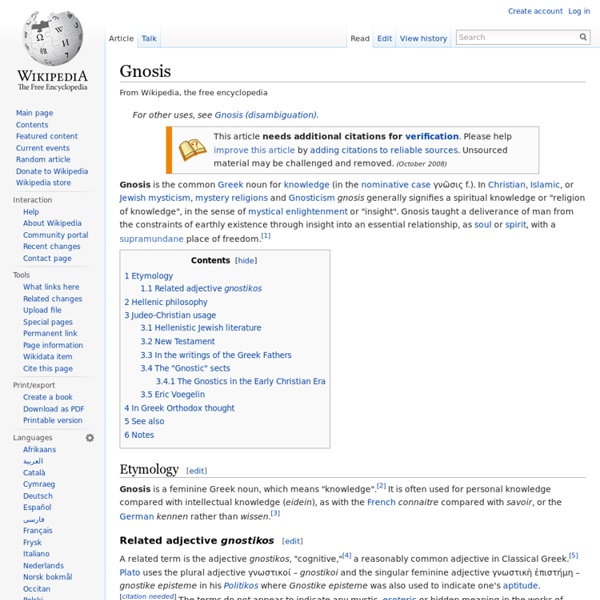 Etymology[edit] Gnosis is a feminine Greek noun, which means "knowledge".[2] It is often used for personal knowledge compared with intellectual knowledge (eidein), as with the French connaitre compared with savoir, or the German kennen rather than wissen.[3] Related adjective gnostikos[edit] A related term is the adjective gnostikos, "cognitive,"[4] a reasonably common adjective in Classical Greek.[5] Plato uses the plural adjective γνωστικοί – gnostikoi and the singular feminine adjective γνωστικὴ ἐπιστήμη – gnostike episteme in his Politikos where Gnostike episteme was also used to indicate one's aptitude. Plato The Statesman 258e— Stranger: In this way, then, divide all science into two arts, calling the one practical (praktikos), and the other purely intellectual (gnostikos). In the Hellenistic era the term became associated with the mystery cults. Hellenic philosophy[edit] Judeo-Christian usage[edit] Hellenistic Jewish literature[edit] New Testament[edit] The "Gnostic" sects[edit]

Theurgy Definitions[edit] Neoplatonism[edit] Although the Neoplatonists are considered polytheists, they embraced a form of monism. Iamblichus' analysis was that the transcendent cannot be grasped with mental contemplation because the transcendent is supra-rational. Emperor Julian[edit] The Emperor Julian the Apostate (332-363), embraced Neoplatonic philosophy and worked to replace Christianity with a version of Neoplatonic paganism. Julian favored ritual theurgy, with an emphasis on sacrifice and prayer. Esoteric Christian theurgy[edit] Esoteric Christianity accepts theurgy as a tradition that could greatly benefit a person. Jewish theurgy[edit] For the Kabbalist, God is a single oneness, not separate "gods". See also[edit] References[edit] External links[edit] Nous This article is about a philosophical term. For the philosophy journal, see Noûs. In philosophy, common English translations include "understanding" and "mind"; or sometimes "thought" or "reason" (in the sense of that which reasons, not the activity of reasoning).[2][3] It is also often described as something equivalent to perception except that it works within the mind ("the mind's eye").[4] It has been suggested that the basic meaning is something like "awareness".[5] In colloquial British English, nous also denotes "good sense", which is close to one everyday meaning it had in Ancient Greece. This diagram shows the medieval understanding of spheres of the cosmos, derived from Aristotle, and as per the standard explanation by Ptolemy. In Aristotle's influential works, the term was carefully distinguished from sense perception, imagination and reason, although these terms are closely inter-related. Pre-Socratic usage[edit] The first use of the word nous in the Iliad. Xenophon[edit]

God as the Devil Satan in the Hebrew Bible[edit] In the Hebrew Bible God is depicted as the source of both light and darkness, as in Isaiah 45:6-7.[1] However this concept of "darkness" or "evil" was not yet personified as "the devil," a later development in Jewish thought.[2] The author of the Books of Chronicles is thought to have first introduced the notion of "divine intermediaries", not found in the earlier parts of the Hebrew Bible. The main evidence adduced by theologians to support this is 1 Chronicles 21, a reworked version of 2 Samuel 24. This change is made most evident in the Chronicler's treatment of 2 Samuel 24:1 "And again the anger of the LORD was kindled against Israel, and he moved David against them to say, Go, number Israel and Judah." which in 1 Chronicles 21:1 becomes: "And Satan stood up against Israel, and provoked David to number Israel." While in the book of Samuel, YHWH himself is the agent in punishing Israel, while in 1 Chronicles, an "adversary" is introduced. Marcion of Sinope

Hermetic Qabalah Teachings[edit] Conception of Divinity[edit] A primary concern of Hermetic Qabalah is the nature of divinity, its conception of which is quite markedly different from that presented in monotheistic religions; in particular there is not the strict separation between divinity and humankind which is seen in monotheisms.[2] Hermetic Qabalah holds to the neoplatonic conception that the manifest universe, of which material creation is a part, arose as a series of emanations from the godhead.[3] The Sephiroth in Hermetic Qabalah[edit] From Ain Suph Aur crystallises Kether, the first sephirah of the Hermetic Qabalistic tree of life. Each sephirah is considered to be an emanation of the divine energy (often described as 'the divine light') which ever flows from the unmanifest, through Kether into manifestation.[7] This flow of light is indicated by the lightning flash shown on diagrams of the sephirotic tree which passes through each sephirah in turn according to their enumerations. History[edit]

Antinomianism In Christianity, an antinomian is "one who holds that under the gospel dispensation of grace the moral law is of no use or obligation because faith alone is necessary to salvation".[1] Many antinomians, however, believe that Christians will obey the moral law despite their freedom from it. The distinction between antinomian and other Christian views on the moral law is that antinomians believe that obedience to the law is motivated by an internal principle flowing from belief rather than any external compulsion.[2] Examples are Martin Luther's critique of antinomianism and the Antinomian Controversy of the 17th century Massachusetts Bay Colony. Although the term originated in the 16th century, the topic has its roots in Christian views on the old covenant extending back to the 1st century. It can also be extended to any individual who rejects a socially established morality.[1] Few groups, other than Christian anarchists or Jewish anarchists, explicitly call themselves antinomian.

Christian Kabbalah The Renaissance saw the birth of Christian Kabbalah/Cabala (From the Hebrew קַבָּלָה "reception", often transliterated with a 'C' to distinguish it from Jewish Kabbalah and Hermetic Qabalah[1]), also spelled Cabbala. Interest grew among some Christian scholars in what they saw to be the mystical aspects of Judaic Kabbalah, which were compatible with Christian theology. Although somewhat obscure, the tradition of Christian Cabala or Catholic Cabala still persists today.[citation needed] Background[edit] The movement was influenced by a desire to interpret aspects of Christianity even more mystically than current Christian Mystics. After the 18th century, Kabbalah became blended with European occultism, some of which had a religious basis; but the main thrust of Christian Kabbalah was by then dead. Medieval precursors[edit] Blessed Raymond Llull[edit] Spanish conversos[edit] Christian Kabbalists[edit] Pico della Mirandola[edit] That could not be said of Reuchlin, Knorr von Rosenroth and Kemper.

SIGNS: THE SIGNIFICANCE OF +++Representing God and the Saints+++ PLANTS, TREES AND FLOWERS ACACIA: The acacia is a symbol of the immortality of the soul. ALMOND: The almond is a symbol of Divine approval or favor. ANEMONE: The anemone may be depicted in scenes of the Crucifixion, or in conjunction with the Virgin Mary to show her sorrow for the Passion of Christ. APPLE: In Latin, the word for apple and the word for evil, malum, are identical. This passage is interpreted as referring to Christ. As Christ is the new Adam, so, in tradition, the Virgin Mary is considered to be the new Eve, and, for this reason, an apple placed in the hands of Mary is also considered an allusion to salvation. VIEW VIRGIN UNDER THE APPLE TREE ASPEN: There are two stories about the aspen tree. BRAMBLE: The bramble was believed to be the burning bush which the Angel of the Lord appeared to Moses in Exodus 3. BULRUSH [CATTAIL]: The bulrush is a lowly, thickly clustered, common plant, growing near the water. among with the planted grain.

Western esotericism Western esotericism (also Western hermetic tradition, Western mysticism, Western inner tradition, Western occult tradition, and Western mystery tradition) is a broad spectrum of spiritual traditions found in Western society, or refers to the collection of the mystical, esoteric knowledge of the Western world. This often includes, but is not limited to, philosophy, meditation, herbalism, alchemy, astrology, divination, and various forms of ritual magic. The tradition has no one source or unifying text, nor does it hold any specific dogma, instead placing emphasis on spiritual "knowledge" or gnosis and the rejection of blind faith. Although the protosciences were widespread in the ancient world, the rise of modern science was born from occult varieties of Western Esotericism reinterpreted in the "Age of Enlightenment" and is documented within the field known as the History of science. Definition[edit] As a category, Western esotericism has been defined in various ways. History[edit]

Scientists offer quantum theory of soul's existence Maybe Patrick Swayze was onto something when he walked off to heaven at the end of 'Ghost'. Source: Supplied According to the quantum consciousness theory, the soul lives within structures called microtubules that live inside brain cells. Source: Supplied A PAIR of world-renowned quantum scientists say they can prove the existence of the soul. American Dr Stuart Hameroff and British physicist Sir Roger Penrose developed a quantum theory of consciousness asserting that our souls are contained inside structures called microtubules which live within our brain cells. Their idea stems from the notion of the brain as a biological computer, "with 100 billion neurons and their axonal firings and synaptic connections acting as information networks". Dr Hameroff, Professor Emeritus at the Departments of Anesthesiology and Psychology and Director of the Centre of Consciousness Studies at the University of Arizona, and Sir Roger have been working on the theory since 1996.

What is GOOD about nightmares. "In the process of becoming whole, we recognize and take responsibility for our shadow. Each shadow issue we reclaim is one less to project upon another person, nationality, or race." - from "The Happy Introvert " by E. Wagele Nightmares must be terrible for those who are so haunted by them it interferes with their sleep and waking life. But is treating the nightmares instead of their source putting the cart before the horse? In Sarah Kershaw's New York Times article (July 26, 2010), she describes Dr. I have great respect for the unconscious , that unknown part of ourselves that is behind many of our attitudes and much of what we do. My dreams aren't always what I want to hear at that moment, but they represent a precious, and real part of myself.