Ancient DNA counters biblical account of the mysterious Canaanites. When the pharaohs ruled Egypt and the ancient Greeks built their first cities, a mysterious people called the Canaanites dominated the Near East. 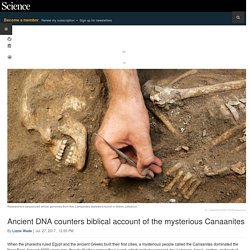 Around 4000 years ago, they built cities across the Levant, which includes present-day Lebanon, Israel, Jordan, and part of Syria. Yet the Canaanites left no surviving written records, leaving researchers to piece together their history from secondhand sources. Study Shows Religion In The U.S. Is In Decline. Thank you for your interest in Patheos newsletters! 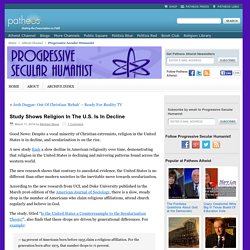 Please enter your email address below and click the "Subscribe" button. Thank you for your subscription. You can visit your Preference Center to complete your profile and see what else we have to offer. We apologize, we were unable to complete your subscription at this time, please try again later. If this error persists please contact us at communications@patheos.com. 1500 Year Old Bible Confirms That Jesus Christ Was Not Crucified - Vatican In Awe - Sons on the Pyre - Alternative Electronica. 1500-2000 year old bible found in Ankara, Turkey. 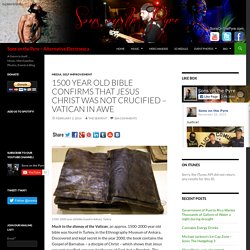 Much to the dismay of the Vatican, an approx. 1500-2000 year old bible was found in Turkey, in the Ethnography Museum of Ankara. Discovered and kept secret in the year 2000, the book contains the Gospel of Barnabas – a disciple of Christ – which shows that Jesus was not crucified, nor was he the son of God, but a Prophet. Who Wants a Christian America? Republicans tend to be Second Amendment absolutists. 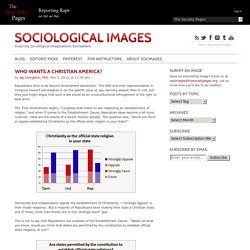 The NRA and their representatives in Congress haven’t yet weighed in on the specific issue of, say, banning assault rifles in LAX, but they just might argue that such a law would be an unconstitutional infringement of the right to bear arms. The First Amendment begins, “Congress shall make no law respecting an establishment of religion,” and when it comes to the Establishment Clause, Republican ideas become a bit more nuanced. The Death Of Christianity. With the numbers dwindling, millennial generation leaving, and a majority of the nation seemingly sleeping on a Sunday morning, it’s been said that Christianity’s death in America is imminent. 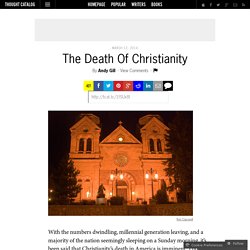 Though, I’m not so sure Christianity is dying; so much as only a certain kind of Christianity is dying. Separation of church and state you say? New Report: ‘A Third of Adults Under 30 Have No Religious Affiliation’ Scientists Create Healthy Mice Using Eggs Made From Stem Cells. At Last Night's Debate: Romney Told 27 Myths In 38 Minutes. By Igor Volsky on October 4, 2012 at 9:08 am "At Last Night’s Debate: Romney Told 27 Myths In 38 Minutes" Pundits from both sides of the aisle have lauded Mitt Romney’s strong debate performance, praising his preparedness and ability to challenge President Obama’s policies and accomplishments. 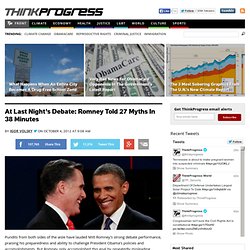 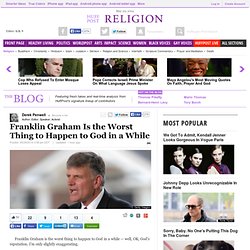 New tests show no evidence of forgery in ‘Gospel of Jesus’s Wife’ Couple faces prison after sons' prayer deaths. Will camel discovery break the Bible's back? Noah's Ark discovery raises flood of questions. Opinion by Joel Baden, Special to CNN (CNN) – That faint humming sound you’ve heard recently is the scholarly world of the Bible and archaeology abuzz over the discovery of the oldest known Mesopotamian version of the famous Flood story. 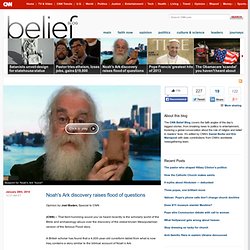 A British scholar has found that a 4,000-year-old cuneiform tablet from what is now Iraq contains a story similar to the biblical account of Noah’s Ark. “The Revisionaries”: Texas schoolbook battle — crazier than you thought! Don McLeroy is a dentist in suburban Texas with the geeky, earnest manner of an American guy who has educated himself, however imperfectly, on a wide variety of topics. 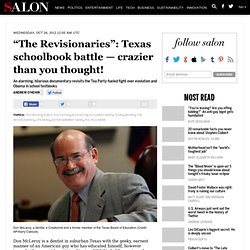 With his balding pate and high-waisted, pleated slacks, he makes Ned Flanders from “The Simpsons” look like Mick Jagger, circa 1969. I found myself utterly unable to resist McLeroy, who is likable and 100 percent sincere. Calif. churches ask court to restore nativity displays. A federal judge Monday denied a bid by churches to force Santa Monica to reopen spaces in a city park to private displays, including life-sized Christmas Nativity scenes. 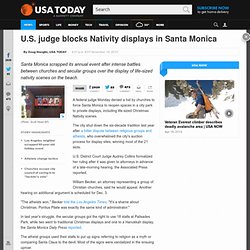 The city shut down the six-decade tradition last year after a bitter dispute between religious groups and atheists, who overwhelmed the city's auction process for display sites, winning most of the 21 slots. U.S. District Court Judge Audrey Collins formalized her ruling after it was given to attorneys in advance of a late-morning hearing, the Associated Press reported. vRgib.png (762×721) Does the Bible Really Call Homosexuality an “Abomination”? UbPQC.gif (476×8467) 2012-05-16.jpg (922×880) How the Christian Right's Homophobia Scares Away Religious Young People. May 16, 2012 | Like this article? Join our email list: Stay up to date with the latest headlines via email.

Christian Right activists who give money, pressure politicians and organize against gay rights may think they’re accomplishing a couple of goals, like rolling back gay rights and asserting their religion’s primacy in American culture. The Vatican claims Darwin's theory of evolution is compatible with Christianity. 6m32D.png (PNG Image, 1280 × 720 pixels) You Say, God Says... Why the Anti-Science Creationist Movement Is So Dangerous. September 8, 2011 | Like this article? Join our email list: Stay up to date with the latest headlines via email. A few weeks ago, Jon Huntsman torpedoed his candidacy for the Republican presidential nomination by making the following announcement: "To be clear.

I believe in evolution and trust scientists on global warming. 6lpph.jpg (JPEG Image, 580x709 pixels) _lnlyf1I3Uy1qbqt8go1_500.jpg (JPEG Image, 500x338 pixels) Treaty of Tripoli - America NOT a Christian nation. The Treaty of Tripoli (Treaty of Peace and Friendship between the United States of America and the Bey and Subjects of Tripoli of Barbary) was the first treaty concluded between the United States of America and Tripolitania, signed at Tripoli on November 4, 1796, and at Algiers (for a third-party witness) on January 3, 1797. It was submitted to the Senate by President John Adams, receiving ratification unanimously from the U.S. Senate on June 7, 1797, and signed by Adams, taking effect as the law of the land on June 10, 1797.

The treaty was a routine diplomatic agreement but has attracted later attention because the English version included a clause about religion in the United States. Barbary pirates[edit] Signing and ratification[edit] The official treaty was in Arabic text, and a translated version by Consul-General Barlow was ratified by the United States on June 10, 1797. President Adams' signing statement Article 11[edit] Article 11 Article 11 reads: Art. 11.

But once I became governor … I became the governor of all the people. Relevant. 5 Things You Won't Believe Aren't In the Bible.

Meanwhile in the Bible Belt... UnChristians.