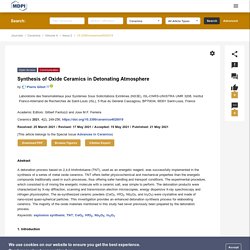 Introduction An explosion or detonation is a powerful, high-temperature (>1000 °C) decomposition chemical reaction that releases a large amount of heat and pressure (GPa), as well as a large volume of gases, in a few microseconds [1]. Explosives, molecules that detonate, are most of the time used as a destructive source by the military (e.g., bombs, warheads and ammunition) or for civil engineering (e.g., road construction, mining, comminuting, avalanche maintenance, hazardous land stabilization, etc.). People Laughed at this Car, Until They Saw This Happen... Underground Bases, Celebrity Cloning, Breakaway Civilizations, Zero-Point Field Technology, Soul/Consciousness Transfer, Immortality, Trauma-Based Mind-Control, Genetic Engineering, DNA Activation, Time Tra. The Iron Man suit could become a reality: Scientists are working on bullet-proof ‘liquid’ armour that gives soldiers super-human strength.

This Is How The Solar Warden And Blue Sphere Alliance Will Change Life As We Know It (Corey Goode) Lasers and Electronic Warfare To Be Used in New World of Drones and Anti-Drones. By Nicholas West As the global drone arms race continues to expand, so do the counter measures. 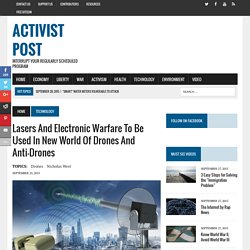 The proliferation of commercial drones, in particular, is expected to present new challenges to an increasingly crowded sky. Among commercial and military drones is the potential for swarms of micro-drones that can be hidden in plain sight … at least to the naked eye. However, drones are never hidden from the electromagnetic spectrum. A UK defense firm announced that it is working on a comprehensive defense shield that aims to “control the electromagnetic spectrum” – electronic warfare. Selex ES is calling its system Falcon Shield, highlighted in a recent press release: Easy to make, cheap to buy, simple to fly and hard to detect, commercially available drones are one of the most quickly evolving technological threats to both military and civilian environments.

This little device delivers turnkey Internet privacy and security (Ad) Future Military Robots. The Difference Between the Death Star and the Pentagon. Giant Radar Blimp Time-Lapse. PROJECT CAMELOT: MIKE HARRIS: SYRIAN BRIEFING ON ET PRESENCE. Project Avalon Military Advanced Technology Whistleblower Part 1. War Technology - Future. Since humans first started using weapons for hunting, defense and for aggression there has been a battle between those who develop protection or armor and those who develop the weapons. 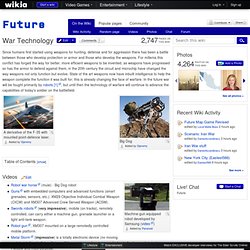 For millenia this conflict has forged the way for better, more efficient weapons to be invented, as weapons have progressed so has the armor to defend against them, in the 20th century the circuit and microchip have changed the way weapons not only function but evolve. State of the art weapons now have inbuilt intelligence to help the weapon complete the function it was built for; this is already changing the face of warfare. In the future war will be fought primarily by robots [1], but until then the technology of warfare will continue to advance the capabilities of today's soldier on the battlefield. Videos Edit Non Videos Links Discovery Channel Future Weapons. Drones, cyberconflict, and other military technologies require we rewrite the rules of war. Photo by Adek Berry/Getty Images. 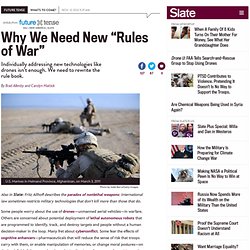 Also in Slate: Fritz Allhoff describes the paradox of nonlethal weapons: International law sometimes restricts military technologies that don't kill more than those that do. Some people worry about the use of drones—unmanned aerial vehicles—in warfare. Others are concerned about potential deployment of lethal autonomous robots that are programmed to identify, track, and destroy targets and people without a human decision-maker in the loop. Many fret about cyberconflict. Some fear the effects of cognitive enhancers—pharmaceuticals that will reduce the sense of risk that troops carry with them, or enable manipulation of memories, or change moral postures—on the battlefield. Black Knight Transformer Drone Makes Its Debut. Chris CarringtonActivist Post Advanced Tactics Inc., a California technology company, has benefited from funding from the Congressional Special Interest Program to enable the development of a transformer-style drone that can turn into a truck in order to facilitate troop and cargo transport. 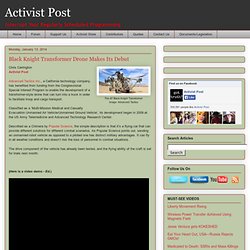 Classified as a ‘Multi-Mission Medical and Casualty Evacuation Unmanned Air Vehicle/Unmanned Ground Vehicle’, its development began in 2009 at the US Army Telemedicine and Advanced Technology Research Center. Described as a Chimera by Popular Science, the simple description is that it’s a flying car that can provide different solutions for different combat scenarios. The Era Of Cyborgs Has Begun. Update on the merger of human and machine Nicholas WestActivist Post Technology seems to be on a runaway course either to free humanity or to enslave us. 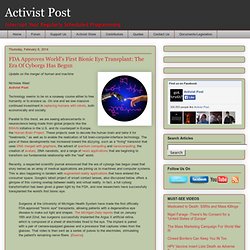 On one end we see massive continued investment in replacing humans with robots, both economically and socially. Parallel to this trend, we are seeing advancements in neuroscience being made from global projects like the BRAIN initiative in the U.S. and its counterpart in Europe, the Human Brain Project. These projects seek to decode the human brain and tailor it for "treatments," as well as to enable the realization of full brain-computer-interface technology.

Recently, a respected scientific journal announced that the era of cyborgs has begun (read that story below) as an array of medical applications are joining us to machines and computer systems. While the device does not offer any type of superhuman enhancement - it in fact only offers rudimentary sight - researchers are heralding this as a major step in a new direction.