Hackers: The Practical Green Activists. Video by Ellie McCutcheon and Mike DeVito The symbol of the Hackerspaces movement (Courtesy Hackerspaces) "Green" is a pretty popular thing to be right now. 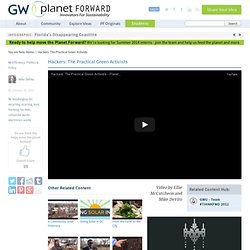 It's fashionable and practical - you can be part of the latest trend while also doing some good, and all it takes it the decision to modify some aspect of your life. Maybe you save energy, maybe you buy sustainability sourced products, maybe you compost or sort the recycling for your entire block. No matter what you do, you decided to be green, made a plan, and then went for it. Story after story, we've been reporting all year on people who have made conscious choices to be green. Hacking (the traditional kind - not the people writing viruses and breaking into mainframes, who are actually called "crackers") is, simply put, the art of modifying, repairing and rebuilding technology oneself to suit particular needs.

The Self-Repair Manifesto (Courtesy iFixit) HacDC's Fractal Logo (Courtesy HacDC) It's not just about waste, either. How Hacking the Human Brain Can Save Civilization. Humans’ power to determine the future of planet Earth is increasing exponentially. 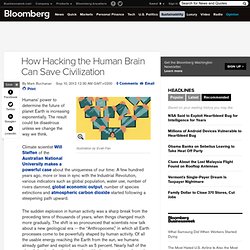 The result could be disastrous unless we change the way we think. Climate scientist Will Steffen of the Australian National University makes a powerful case about the uniqueness of our time: A few hundred years ago, more or less in sync with the Industrial Revolution, various indicators such as global population, water use, number of rivers dammed, global economic output, number of species extinctions and atmospheric carbon dioxide started following a steepening path upward.

The sudden explosion in human activity was a sharp break from the preceding tens of thousands of years, when things changed much more gradually. The shift is so pronounced that scientists now talk about a new geological era -- the “Anthropocene,” in which all Earth processes come to be powerfully shaped by human activity.

Finite Planet What comes next? This is a profound insight. Reckless Innovation. John Zerzan: anti-civilization theorist, writer and speaker. WHY PRIMITIVISM? By John Zerzan Debord biographer Anselm Giap1 referred to the puzzle of the present, “where the results of human activity are so antagonistic to humanity itself,” recalling a question posed nearly 50 years ago by Joseph Wood Krutch: “What has become of that opportunity to become more fully human that the ‘control of nature’ was to provide?” 2 The general crisis is rapidly deepening in every sphere of life.

On the biospheric level, this reality is so well-known that it could be termed banal, if it weren’t so horrifying. A grisly link to the social world is widespread pharmaceutical contamination of watersheds.3 In this case, destruction of the natural world is driven by massive alienation, masked by drugs. Today’s reality keeps underlining the inadequacy of current theory and its overall retreat from any redemptive project.

Future Primitive. Future Primitive John Zerzan Division of labor, which has had so much to do with bringing us to the present global crisis, works daily to prevent our understanding the origins of this horrendous present. 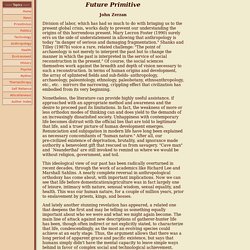 Mary Lecron Foster (1990) surely errs on the side of understatement in allowing that anthropology is today "in danger of serious and damaging fragmentation. " The Neo-primitivist Turn: Critical Reflections on Alterity, Culture, and ... - Victor Li. In recent years the concept of 'the primitive' has been the subject of strong criticism; it has been examined, unpacked, and shown to signify little more than a construction or projection necessary for establishing the modernity of the West. 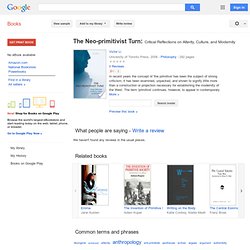 The term 'primitive' continues, however, to appear in contemporary critical and cultural discourse, begging the question: Why does primitivism keep reappearing even after it has been uncovered as a modern myth? In The Neo-primitivist Turn, Victor Li argues that this contentious term was never completely banished and that it has in fact reappeared under new theoretical guises. Futuristic Primitivism/Instinctive Override car by Ross Lovegrove. Interieur 2012: British designer Ross Lovegrove presented a futuristic concept car shaped according to instinct rather than science at the Interieur design biennale in Kortrijk, Belgium, last week (+ movie). 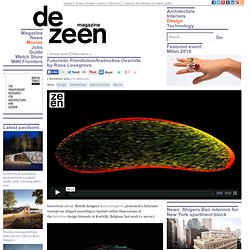 For his response to the design biennale's theme of Future Primitives, Lovegrove created a fibre glass model with Italian concept car designers G-Studio and suspended it from the ceiling to act as a 3D screen for a series of video projections. Its smooth form is a combination of the Pininfarina CNR concept car from the 1970s and the natural shape of a water droplet.

"There is a moment of convergence between these forms where a genesis form appears almost as a discovery point at which fluid dynamics, aerodynamics and human form meet to reveal a volume that is more akin to a biological species than a mechanical one," Lovegrove told Dezeen. Above: photograph by Dezeen Above: photograph by Wouter Van Vaerenbergh Photographs are by Simona Cupoli except where stated. Instinctive Override - Future Primitivism.