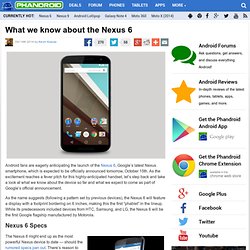 As the excitement reaches a fever pitch for this highly-anticipated handset, let’s step back and take a look at what we know about the device so far and what we expect to come as part of Google’s official announcement. Google posts its first Nexus 6 and Nexus 9 promo video. Huawei launches its entry-level 64-bit Ascend Y550 in the UK. HTC Desire EYE First Look. HTC One M8 for Windows Hands-on. Samsung Galaxy Note 4: S Pen. BlackBerry 'Visa' and 'Victoria' could be the next devices with interesting keyboards. With the BlackBerry Passport, BlackBerry is introducing their new three-row keyboard. 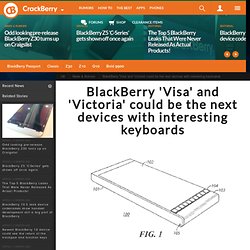 While the verdict is still out on how BlackBerry users will feel about it, it's starting to look as though there are already plans to continue with that styling even further. Generally, I don't give patents much weight. BlackBerry files patents all day long and now even have a dedicated business unit handling them. However, when those patents get coupled with device code names, my interest levels in those patents goes up and as pointed out in the CrackBerry forums, we now have new code names and patents. 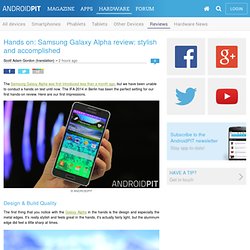 It's really stylish and feels great in the hands, it's actually fairly light, but the aluminum edge did feel a little sharp at times. Like the Note 4, the edge of the Galaxy Alpha is enlarged at the headphone jack. Samsung GALAXY ALPHA Just Alpha Official Video. New high-quality Galaxy Alpha photos give the best look at Samsung's metal-clad iPhone 6 adversary. Sony Xperia Z3 Compact screenshot leaks alongside specs. Sony had a hit on its hands, at least in some internet communities, with the Sony Xperia Z1 Compact. 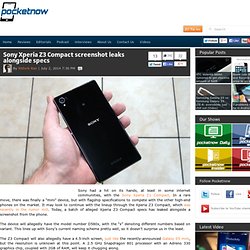 In a rare move, there was finally a “mini” device, but with flagship specifications to compete with the other high-end phones on the market. It may look to continue with the lineup through the Xperia Z3 Compact, which was recently in the rumor mill. Today, a batch of alleged Xperia Z3 Compact specs has leaked alongside a screenshot from the phone. The device will allegedly have the model number D580x, with the “x” denoting different numbers based on variant. This lines up with Sony’s current naming scheme pretty well, so it doesn’t surprise us in the least. 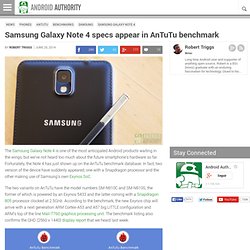 Fortunately, the Note 4 has just shown up on the AnTuTu benchmark database. In fact, two version of the device have suddenly appeared, one with a Snapdragon processor and the other making use of Samsung’s own Exynos SoC. The two variants on AnTuTu have the model numbers SM-N910C and SM-N910S, the former of which is powered by an Exynos 5433 and the latter coming with a Snapdragon 805 processor clocked at 2.5GHz. According to the benchmark, the new Exynos chip will arrive with a next generation ARM Cortex-A53 and A57 big.LITTLE configuration and ARM’s top of the line Mali-T760 graphics processing unit. The benchmark listing also confirms the QHD (2560 x 1440) display report that we heard last week. Androidcentral. If you've been holding on to that older Samsung Rugby Smart or even last year's Galaxy S4 Active, you'll be pleased with what you're about to read. 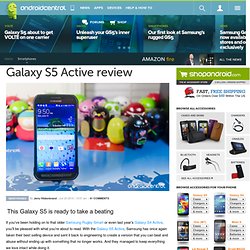 With the Galaxy S5 Active, Samsung has once again taken their best selling device and sent it back to engineering to create a version that you can beat and abuse without ending up with something that no longer works. And they managed to keep everything we love intact while doing it. If you want or need the features and specs from the Galaxy S5, but know that you'll be dragging it through the mud, the blood and the beer, then the Galaxy S5 Active was built for you. LG G3 Mini might be smaller than the G2 Mini. Despite its mini moniker the LG G2 Mini, with its 4.7-inch screen, really wasn't all that small. 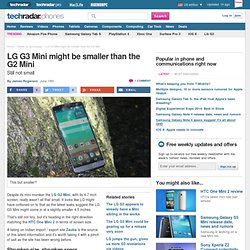 It looks like LG might have cottoned on to that as the latest leaks suggest the LG G3 Mini might come in at a slightly smaller 4.5 inches. That's still not tiny, but it's heading in the right direction matching the HTC One Mini 2 in terms of screen size. A listing on Indian import / export site Zauba is the source of this latest information and it's worth taking it with a pinch of salt as the site has been wrong before. Shrunken size, shrunken specs Zauba claims that the LG G3 Mini will have a 1.2GHz quad-core processor, 8GB of internal memory, 5MP camera and a 2100 mAh battery. BlackBerry confirms Passport phone, will launch it in September. BlackBerry has confirmed the recently-leaked handset codenamed 'Windermere' will officially be announced under the name Passport. 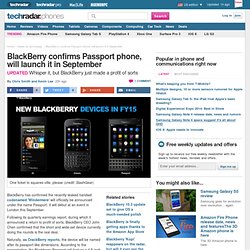 It will debut at an event in London this September. Following its quarterly earnings report, during which it announced a return to profit of sorts, BlackBerry CEO John Chen confirmed that the short and wide-set device currently doing the rounds is the real deal. Naturally, as CrackBerry reports, the device will be named after its passport-like dimensions. Huawei Mulan stars in a photo shoot, has fingerprint sensor. The upcoming Huawei smartphone so, far known only by its codename Mulan, is in the news again, this time because it's been pictured in all its glory. 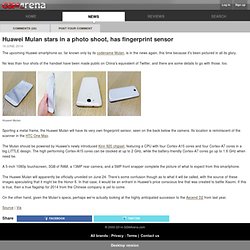 No less than four shots of the handset have been made public on China's equivalent of Twitter, and there are some details to go with those, too. Huawei Mulan Sporting a metal frame, the Huawei Mulan will have its very own fingerprint sensor, seen on the back below the camera. Its location is reminiscent of the scanner in the HTC One Max. The Mulan should be powered by Huawei's newly introduced Kirin 920 chipset, featuring a CPU with four Cortex-A15 cores and four Cortex-A7 cores in a big.LITTLE design. A 5-inch 1080p touchscreen, 3GB of RAM, a 13MP rear camera, and a 5MP front snapper complete the picture of what to expect from this smartphone. Samsung Galaxy Note 4 to pack a pixel punch as QHD screen 'confirmed'

The Samsung Galaxy Note 4 will be bringing a QHD screen with it to IFA this year, according to a discovered user agent profile. 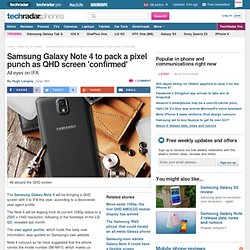 The Note 4 will be leaping from its current 1080p status to a 2560 x 1440 resolution, following in the footsteps of the LG G3, revealed last month. The user agent profile, which holds this tasty new information, was spotted on Samsung's own website. Samsung web profile hints that Galaxy Note 4 will have a QHD display. Samsung Galaxy F release date, news and rumors.

Page 1 of 2Release date, display and chassis The Samsung Galaxy S5 is a top smartphone with a lot to shout about, but with increased pressure from HTC, Sony and LG, there are suggestions that Samsung is looking to give its flagship another boost. Compare the build quality of the Galaxy S5 to the HTC One M8, Sony Xperia Z2 and iPhone 5S and the Samsung flagship feels cheap in comparison, while the full HD display is unlikely to be a match for the QHD offering on the upcoming LG G3. To tackle these two points head-on, the Samsung Galaxy S5 Prime is apparently being readied in South Korea - with a bumped up screen and shiny new chassis. Samsung CEO JK Shin has said it isn't working on a premium Galaxy S5, but the rumor mill is refusing to slow down on the Galaxy S5 Prime chatter. Apparently there's a HTC One M8 Prime in the works too, so the QHD smartphone market could be about to really hot up. Huawei's Flagship 'Mulan' Specs and Renders Leak.

A new Huawei smartpone, dubbed the Mulan, surfaced in benchmarks at the end of last month. Today, we’re seeing some more details about the Mulan, coming from Chinese site Weibo. New specs give us a better idea of what the new smartphone will bring with it, as well as a render that gives us an idea of what the Mulan will look like. The Mulan is running on an octa-core Kirin 920 chipset clocked at 1.3GHz, 3GB of RAM, and a Mali-T624 GPU. Even though the device is clocked at just 1.3GHz, it still scored a respectable 37,999 points in AnTuTu benchmarks. New iPhone 6 concept (with iOS 8) gets compared to Samsung's Galaxy S5 and the iPhone 5s. The LG G3 Mini could be gearing up for a release very soon. Anyone who's anyone is pushing out a "Mini" these days, and it seems LG's not one to be left out.

It looks like the LG G3 Mini has just been spotted making its way through Indian import/export site Zauba, which means it's currently undergoing testing. We went hands on with the LG G3 The information for this "LGD722" device reveals a 4.5-inch display, 1.2GHz quad-core processor, 8GB of internal storage and a 5MP camera. Micro machines That camera sounds suspiciously low-spec for the G3 Mini, especially as an earlier leak pointed to an 8MP snapper, so it's perhaps best to not take any of this as gospel.

However Zauba has historically been a good indicator of things to come (and indicative that they're close) so the LG G3 Mini is beginning to look more of a case of when, not if. Top-shelf BlackBerry Q30 (Windermere) photos and specs leak. LG G3 and battery life - how much does the QHD display hurt? The LG G3 just left everyone in awe, as is the case with most LG G series device announcements. It is miles ahead of its predecessor, and a step ahead its competition in many aspects. The display is stunning with a Quad HD resolution, design is gorgeous, build quality is solid and performance is strong. But that crisp screen is sure to destroy battery life, right?

Not exactly. Acer unveils five smartphones, a tablet and a smartband. Acer has gone rampant and unveiled a slew of new device before their expected Computex 2014 debut (starting June 3). Those devices include the Acer Liquid X1, E700, E600, Liquid Jade and Liquid Z200 smartphones, the Liquid Leap smartband and the Iconia 8 tablet. All devices are expected to launch in Q3 of this year. Leaked image of 7-inch Samsung Galaxy Mega device spotted. Androidcentral.

Androidcentral. Samsung 7-inch phone arrives at the FCC, makes the Galaxy Mega look tiny. Project Tango phone flies a drone [video] with a 7-inch tablet just around the corner. Google is making news today with their Project Tango 3D environment mapping devices. Earlier today we got to see the camera ladden phone take a quadrotor drone for a little test flight, and now we hear rumor of an upcoming 7-inch tablet version that could be in the hands of developers in just a few short weeks.