Robotic Nation (3) Robotic Freedom. If you have read the articles entitled Robotic Nation, Robots in 2015 and Manna, and if you have looked at the many robotic news items on this page, then you may be coming to a new realization. 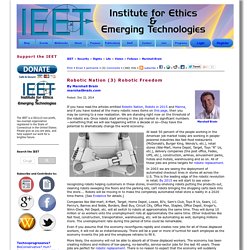 We are standing right now on the threshold of the robotic era. Once robots start arriving in the job market in significant numbers—something that we will see happening within a decade or so—they have the potential to dramatically change the world economy. At least 50 percent of the people working in the American job market today are working in people-powered industries like fast-food restaurants (McDonald's, Burger King, Wendy's, etc.), retail stores (Wal-Mart, Home Depot, Target, Toys "R" Us, etc.), delivery companies (the post office, Fedex, UPS, etc.), construction, airlines, amusement parks, hotels and motels, warehousing and so on.

Automation: A look at exactly how robots will take your job. Follow us on Twitter @NAAIJ Like us on Facebook NAAofIJ You may have heard of or seen recent reports that 50% of the Global Workforce is destined for the unemployment line. 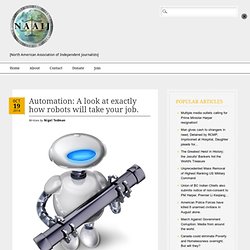 Most of those reports are based on an article out of the MIT Technology Review entitled Report Suggests Nearly Half of U.S. Jobs Are Vulnerable to Computerization. That article is making such informed claims based on data from a study out of the University of Oxford Engineering Sciences Department, A copy of which I’ve obtained, Which examined no less than 702 detailed occupations and assessed the likelihood those jobs would be made obsolete in the near future, Or as they call it the “probability of computerization using a Gaussian process classifier” As much fun as sifting thru probabilities is, You really need to do no more than look at the world around you to see that Automation is coming, Full steam ahead.

New Material Sucks Water From the Air and Stores It. As the changing climate pushes arid regions around the world to become drier, many are asking how we will continue to provide enough water for the people and crops in those areas. 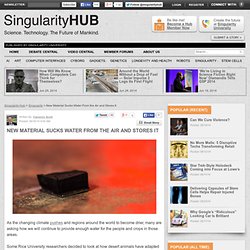 Web. Bitcoin: How the digital currency is changing everything. Bitcoin. 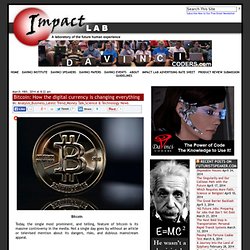 Technology and jobs: Coming to an office near you. INNOVATION, the elixir of progress, has always cost people their jobs.

In the Industrial Revolution artisan weavers were swept aside by the mechanical loom. Over the past 30 years the digital revolution has displaced many of the mid-skill jobs that underpinned 20th-century middle-class life. The age of artificial intelligence is here - San Diego Technology. Computers can now learn from their mistakes and this will turn the digital world into a new era in 2014, according to the N.Y. 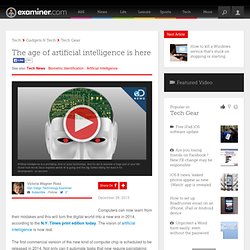 Times print edition today. The vision of artificial intelligence is now real. The first commercial version of the new kind of computer chip is scheduled to be released in 2014. Tens of billions of potentially habitable, Earth-size planets in our galaxy, say astronomers. Artist’s representation of the “habitable zone,” the range of orbits where liquid water is permitted on the surface of a planet. 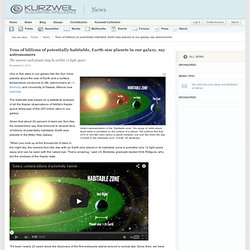 The authors find that 22% of Sun-like stars harbor a planet between one and two times the size of Earth in the habitable zone. (Credit: UC Berkeley) One in five stars in our galaxy like the Sun have planets about the size of Earth and a surface temperature conducive to life, astronomers at UC Berkeley and University of Hawaii, Manoa now estimate. The estimate was based on a statistical analysis of all the Kepler observations of NASA’s Kepler space telescope of the 200 billion stars in our galaxy. Given that about 20 percent of stars are Sun-like, the researchers say, that amounts to several tens of billions of potentially habitable, Earth-size planets in the Milky Way Galaxy. Much-Hyped, MOOCs Maneuver Toward Version 2.0. Since then-Stanford professor Sebastian Thrun opened his Fall 2011 Introduction to Artificial Intelligence course to tens of thousands students around the world, there has been a lot of interest and excitement surrounding MOOCs, or massive, open online courses. 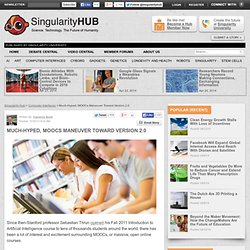 Thrun went on to found a for-profit online university, Udacity, with the backing of some of Silicon Valley’s most influential investors. Two of Thrun’s former Stanford colleagues launched a competitor, Coursera, with the support of the granddaddy of all venture capital firms, Kleiner Perkins. Not to be outdone, the most prestigious universities on the East Coast set up the nonprofit edX. It seemed clear that the future of education would be in MOOCs.

And who wouldn’t want to make lectures given by the best teachers at top universities available online to students in developing countries and poor and remote parts of the United States? Competing for the World Largest Infrastructure Project: Over 100 Million Jobs at Stake. Elon Musk and Daryl Oster, competing for what could become the world’s largest infrastructure project When Tesla Motors CEO, Elon Musk, mysteriously leaked that he was working on his Hyperloop Project, the combination of secrecy, cryptic details, and his own flair for the dramatic all contributed to the media frenzy that followed. 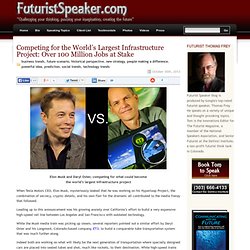 Leading up to this announcement was his growing anxiety over California’s effort to build a very expensive high-speed rail line between Los Angeles and San Francisco with outdated technology. Russell Brand May Have Started a Revolution Last Night. The next big market for data and connected devices? Agriculture. Between efforts to eat more food grown locally, a younger generation of farmers and cheaper component-farming is getting an infusion of data and technology. 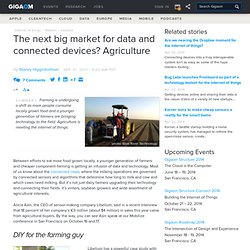 Most of us know about the connected cows, where the milking operations are governed by connected sensors and algorithms that determine how long to milk and cow and which cows need milking. But it’s not just dairy farmers upgrading their technology and connecting their fields: it’s vinters, soybean growers and wide assortment of agricultural interests. Alicia Asin, the CEO of sensor-making company Libelium, said in a recent interview that 18 percent of her company’s €3 million (about $4 million) in sales this year came from agricultural buyers.

Even more ominous for workers, the MIT academics foresee dismal prospects for many types of jobs as these powerful new technologies are increasingly adopted not only in manufacturing, clerical, and retail work but in professions such as law, financial services, education, and medicine. They believe that rapid technological change has been destroying jobs faster than it is creating them, contributing to the stagnation of median income and the growth of inequality in the United States. Scientists Able To Slow Aging In Mice By Modifying The Brain’s Hypothalamus. [Source: Wikipedia] When we age, all parts of our body deteriorate over time. Age of Technological Disruption. "All of the structures that we use to run the world today— our civics, our politics, our legal systems, healthcare, education— are all structured for a world 100 or 200 years ago, not for the world of today. So we think we're in for a lot of disruption," says Salim Ismail, founding director of Singularity University.

ReasonTV's Tracy Oppenheimer caught up with Salim at the 2013 Milken Institute Global Conference in Beverly Hills, CA to discuss crowd funding, the next steps in technological expansion, and how we've entered the age of an information-based environment. "It's happening across industries. The first few were newspapers, music, and electronic publishing.

Those were the first three domains to be fully information-enabled. Singularity University's academic programs strive to "educate, inspire and empower leaders to apply exponential technologies to address humanity's grand challenges. " If you liked this article, please give it a quick review on ycombinator or StumbleUpon . General Fusion on track for Demonstration of Net Gain Equivalent Plasma Compression this year. There is a 19 page presentation from 2012 that updates the progress of General Fusion General Fusion is trying to make affordable fusion power a reality. • Founded in 2002, based in Vancouver, Canada • Plan to demonstrate proof of physics DD equivalent “net gain” in 2013 • Plan to demonstrate the first fusion system capable of “net gain” 3 years after proof • Validated by leading experts in fusion and industrial engineering • Industrial and institutional partners • $42.5M in venture capital, $6.3M in government support.

An Inconvenient Era. 220 Story Sky City Gets go ahead to start construction in June 2013, so it should complete by the end of 2013. Patent Filing Claims Solar Energy "Breakthrough" Washington, DC — In a U.S. patent application, a little-known Maryland inventor claims a stunning solar energy breakthrough that promises to end the planet’s reliance on fossil fuels at a fraction of the current cost – a transformation that also could blunt global warming. Claim: New Packing Material 100% Recyclable AND Removes CO2 From Air. GE to mass-produce critical jet engine part use 3D printing. April 26, 2013. Clean Energy Investments Expected To Triple To $630B Per Year By 2030. Yearly investments in renewable energy capacity are expected to grow by anywhere from two and a half times to more than four and half times current levels by 2030, according to a new forecast by Bloomberg New Energy Finance.

BNEF is predicting a rise to a massive $630 billion invested per year by 2030. The forecast shows the investment in new renewable energy in 2030 to be $630 billion (in nominal terms), which is three times the investment in renewable power capacity in 2012. World’s Largest Solar Towers To Be Built For California Solar Project. US Department Of Energy Funding Projects To Make Electric Cars Cheaper. As part of the Obama administration’s push for cleaner cars, the Department of Energy has recently announced more than $50 million in funding for new projects that will help advance plug-in electric vehicle technology and overall vehicle fuel economy and performance. Rooftop Solar Revolution May Now Be ‘Unstoppable’, Report Finds. FarmedHere: Largest Indoor Vertical Farm Opens In Chicago. The largest indoor vertical farm in the United States has opened.

This Could Be The World’s First 3D-Printed Car. Our Energy Predicament in Charts.