Drones: the tech-savvy trafficker's new drug mule. A quadcopter has recently crashed into a Mexican supermarket parking lot located somewhere near the country's California border, and one of the possible reasons is that its payload was just too heavy for it. 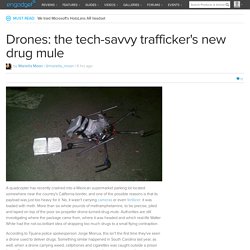 Parrot drones 'vulnerable to flying hack attack' 4 December 2013Last updated at 09:47 ET By Leo Kelion Technology reporter Parrot's drones allow their owners to see video taken from an altitude of 165m (540ft) A security researcher has created a flying contraption that he says can hijack control of other flying drones made by one of the industry's leading manufacturers, Parrot. 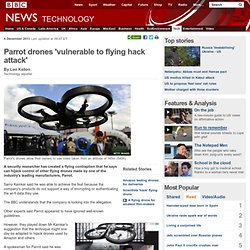 Samy Kamkar said he was able to achieve the feat because the company's products do not support a way of encrypting or authenticating the wi-fi data they use. Health from above: a drone to deliver defibrillators to heart attack victims. German non-profit group Definetz wants to make defibrillators readily available across its country so that any time someone has a heart attack, the life saving devices are within arms reach. 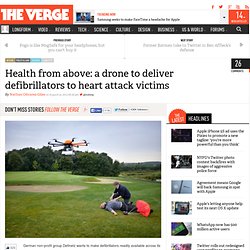 And it's looking to drones to help it bring its vision to fruition. On Friday, the group announced the Defikopter, a concept device it designed with drone-maker Height Tech to fly defibrillators to emergency responders or the public by way of a GPS-enabled smartphone app. Definetz says the Defikopter, which was developed over the last three months, can travel within a radius of 10 kilometers (about six miles), and fly at a speed of 70 kilometers per hour (about 43 miles per hour).

While Definetz and Height Tech have announced their collaborative design, neither organization said if or when the Defikopter would be made available for sale, or when and if the corresponding smartphone app would be released to the public. Voice-controlled quadcopter follows you around, films everything. Quadcopters come in all different shapes and sizes, with most of them skewing on the large side. 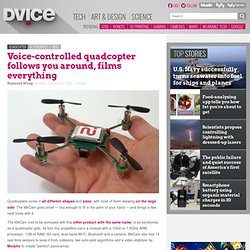 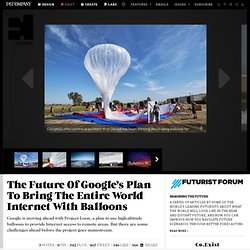 That’s when, according to legend, a Chinese general sent a floating lantern into the sky to call for more troops. Smartphone becomes in-car head-up display. 8 July 2013Last updated at 12:31 ET The device can project information onto a transparent film attached to the windshield. 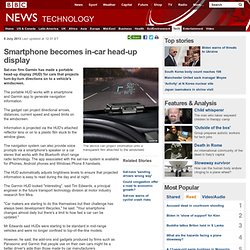 Google tests balloons to beam internet from near space. 15 June 2013Last updated at 07:55 ET By Leo Kelion Technology reporter, BBC News The giant balloons carrying computer equipment are being launched in New Zealand Google is launching balloons into near space to provide internet access to buildings below on the ground. 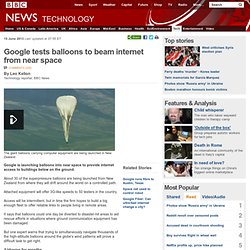 About 30 of the superpressure balloons are being launched from New Zealand from where they will drift around the world on a controlled path. Sky high thinking: Could we all soon own a drone? 18 February 2013Last updated at 20:56 ET By Matthew Wall Business reporter, BBC News Drones are becoming cheap enough for hobbyists to own Drones - or unmanned aerial vehicles (UAVs) - could soon be whizzing across our airspace on all sorts of civil and commercial missions. 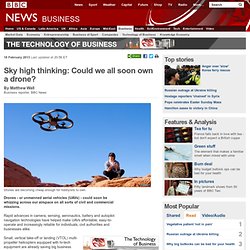 Rapid advances in camera, sensing, aeronautics, battery and autopilot navigation technologies have helped make UAVs affordable, easy-to-operate and increasingly reliable for individuals, civil authorities and businesses alike. Small, vertical take-off or landing (VTOL) multi-propeller helicopters equipped with hi-tech equipment are already saving big business millions of pounds. John Moreland, spokesman for the UAV Systems Association, the UK's main industry body, with about 140 members, told the BBC: "Hundreds of these UAVs are being used commercially these days, typically flying below 400ft (120m) and with a range of about 500m (0.3 miles).

Global export Continue reading the main story. Technology i love you. CIA operating drone base in Saudi Arabia, US media reveal. 6 February 2013Last updated at 17:29 GMT Drones reportedly carry out strikes without Yemeni government permission The US Central Intelligence Agency has been operating a secret airbase for unmanned drones in Saudi Arabia for the past two years. 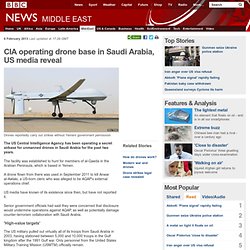 The facility was established to hunt for members of al-Qaeda in the Arabian Peninsula, which is based in Yemen. A drone flown from there was used in September 2011 to kill Anwar al-Awlaki, a US-born cleric who was alleged to be AQAP's external operations chief. US media have known of its existence since then, but have not reported it. Senior government officials had said they were concerned that disclosure would undermine operations against AQAP, as well as potentially damage counter-terrorism collaboration with Saudi Arabia. 'High-value targets' The US military pulled out virtually all of its troops from Saudi Arabia in 2003, having stationed between 5,000 and 10,000 troops in the Gulf kingdom after the 1991 Gulf war.

Continue reading the main story. How Obama Transformed an Old Military Concept So He Can Drone Americans. An MQ-9 Reaper drone taxies on the airfield at Fort Drum, New York, October 2011. 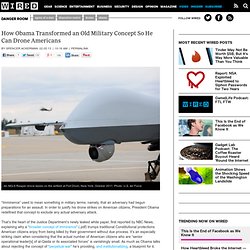 Photo: U.S. Air Force “Imminence” used to mean something in military terms: namely, that an adversary had begun preparations for an assault. In order to justify his drone strikes on American citizens, President Obama redefined that concept to exclude any actual adversary attack. That’s the heart of the Justice Department’s newly leaked white paper, first reported by NBC News, explaining why a “broader concept of imminence” (.pdf) trumps traditional Constitutional protections American citizens enjoy from being killed by their government without due process. Mini helicopter drone for UK troops in Afghanistan. 3 February 2013Last updated at 10:19 ET The Ministry of Defence plans to purchase 160 of the mini drones British soldiers in Afghanistan have become the first to use miniature surveillance helicopters in frontline operations.

The drones can fly around corners and obstacles to identify potential hidden dangers, the Ministry of Defence said. The Norwegian-designed Black Hornet Nano features a tiny camera and relays video and still images to a handheld control terminal. Everything We Know So Far About Drone Strikes. A U.S. Air Force MQ-1 Predator unmanned aerial vehicle. The U.S. is conducting drone strikes in in at least three countries beyond Iraq and Afghanistan. (U.S. Air Force photo by Master Sgt. Stanley Thompson) US drone strikes listed and detailed in Pakistan, Somalia and Yemen. Spies in the sky. Click image to embiggen Are drone attacks becoming the face of modern warfare? The Bureau of Investigative Journalism has collected the comprehensive database of reported drone attacks. Pirate Bay Wants to Put Unassailable Servers in the Sky, Aboard Small Aerial Drones. In an effort to outmaneuver the law enforcement entities that have pursued its swashbuckling operation across the land, the Pirate Bay is looking to the skies.

In a blog post yesterday, the Bay's MrSpock said that in an effort to keep its front machines--the ones that redirect your illicit traffic to servers in a secret location--one step ahead of the law, the organization is going to try to build a network of traffic-relaying aerial drones. You Built What?! A Remote-Controlled Hacker Drone. Richard Perkins and Mike Tassey both worked in information technology in the U.S. Air Force before decamping to various cybersecurity consulting roles in and around the Department of Defense.

But throughout their careers they've always considered themselves hackers at heart, which is why they spent the past two years developing the ultimate mobile hacking device: a drone aircraft that can discreetly break into Wi-Fi networks, emit jamming signals, and even pose as a cellphone tower to intercept communications from the ground. Perkins and Tassey shared an interest in remotely piloted aircraft, and with their professional backgrounds, they naturally began dreaming up surveillance applications. Their Wireless Aerial Surveillance Platform, known as Vespid (the Latin word for "wasp," a play on the acronym), is a modified surplus FQM-117B Army target drone. The Pirate Bay - The galaxy's most resilient bittorrent site. Get hacked, don’t tell: drone base didn’t report virus.

Creech Air Force Base. Creech Air Force Base ("Creech" colloq.) is a USAF command and control facility used "to engage in daily Overseas Contingency Operations[7]…of remotely piloted aircraft systems which fly missions across the globe. "[8] In addition to an airport, the military installation has the Unmanned Aerial Vehicle Battlelab,[9] associated aerial warfare ground equipment, and unmanned aerial vehicles of the type used in Afghanistan and Iraq. US drones: Close-up look at an unmanned aircraft. Mapping US drone and Islamic militant attacks in Pakistan. Missile attacks by US drones in Pakistan's tribal areas have more than doubled under the Obama administration, research by the BBC Urdu service shows. Compared with 25 drone strikes between January 2008 and January 2009, there were at least 87 such attacks between President Obama taking office on 20 January 2009 and the end of June 2010.

The Pirate Bay's server drones plan and other tech news. Virtual reality provides relief from soldiers' trauma - health - 17 May 2012. Virtual reality simulations of combat are helping soldiers with post-traumatic stress disorder find relief from their symptoms. Robert McLay of the US Naval Medical Center in San Diego has preliminary results from a clinical trial comparing virtual reality with standard exposure therapy – which helps patients relearn their responses to stressful situations by focusing on the traumatic event in a controlled environment.