Articles about the future of NGOs

It's time NGOs admit aid isn't going to 'save' Africa. The UK is a world leader in development aid. 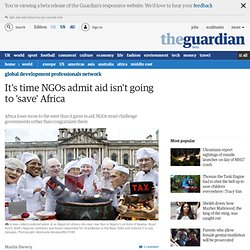 It's also a leader in greenhouse gas emissions, tax haven networks, and taking corporate profits out of Africa – which cause far more poverty there than aid relieves. Yet, the continent is often portrayed as "needing our help" and the question we must answer is what role have international NGOs – including my own, Health Poverty Action – played in portraying Africa as a continent in need of help? Last week, along with 12 other UK and African NGOs, we published research that attempts to challenge the dominant narrative around aid and development. Our report quantifies the total resource flows in and out of Africa. It shows that Africa is losing £113bn to the rest of the world each year, while only £79bn flows in.

And against the £113bn annual losses, aid puts back less than £18bn. This distorted communication implies aid is the answer. First, it undermines public solidarity. Thick problems, thin solutions and the future of NGOs. Trócaire Leading Edge 2020 report. What should INGO’s do differently in the next 5 years? What should international non-governmental organizations(INGO’s) do differently in the next 5 years? 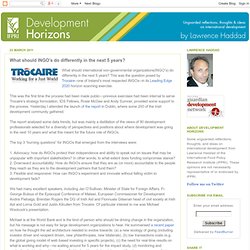 This was the question posed by Trocaire--one of Ireland’s most respected INGOs--in its Leading Edge 2020 horizon scanning exercise. This was the first time the process had been made public—previous exercises had been internal to serve Trocaire’s strategy formulation. IDS Fellows, Rosie McGee and Andy Sumner, provided some support to the process. Responding to Disruptive Change. NGOs and the Future. Nemat Shafik on the future of development finance. The future is bright for corporate-NGO partnerships despite challenges. While there is much to cheer about, 53% of NGOs cited innovation as a reason for partnering, but this figure was down by 23% compared to last year. 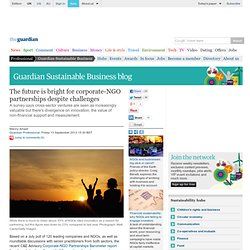 Photograph: Matt Cardy/Getty Images Based on a July poll of 120 leading companies and NGOs, as well as roundtable discussions with senior practitioners from both sectors, the recent C&E Advisory Corporate-NGO Partnerships Barometer report found much to cheer the spirit of those who advocate cross-sector collaboration as a route to addressing economic, social and environmental challenges. With the trend towards strategic, longer-term, higher-value collaborations intensifying, it appears that partnerships are really moving the dial. Dóchas study into CSO experiences of Irish NGOs. The world of NGOs – Simple, Complex or Complicated? The world of NGOs – Simple, Complex or Complicated? 23/06/2011 at 6:28 am In 2007, David Snowden and Mary Boone published a paper in the Harvard Business Review, entitled “A Leader’s Framework for Decision-making”. In the article, they argue that business leaders need new ways of thinking about their jobs, and that “complexity science” offers useful tools in times of turbulence.

The key point made in the article is that leaders need to tailor their behaviour depending on the degree of complexity and predictability of the environment in which their organisation operates. In “simple” environments, classic management theory applies, as there are few surprises. Also in “complicated” environments can leaders look for facts and “right answers”. Note to Development NGOs: Time to become a Don Juan, not a Don Quixote. 22/08/2013 at 8:45 pm By Jolein Baidenmann and Maaike Blom, who are partners at ISDuurzaam consultancy, working on issues of international cooperation and sustainability. 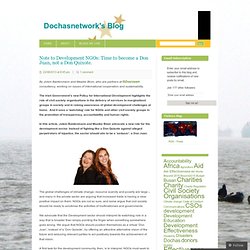 The Irish Government’s new Policy for International Development highlights the role of civil society organisations in the delivery of services to marginalised groups in society and in raising awareness of global development challenges at home. And it sees a ‘watchdog’ role for NGOs and other civil society groups in the promotion of transparency, accountability and human rights.

In this article, Jolein Baidenmann and Maaike Blom advocate a new role for the development sector. Instead of fighting like a Don Quixote against alleged perpetrators of injustice, the sector should aim to be a ‘seducer’, a Don Juan. The global challenges of climate change, resource scarcity and poverty are large – and many in the private sector are arguing that increased trade is having a clear positive impact on them. Also read: Like this: Re-thinking Aid - A collection of articles and topics. The NGO of the Future? 28/12/2010 at 10:36 pm. 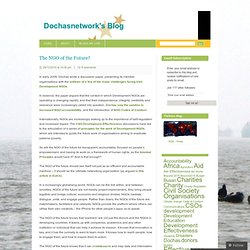 An Ode to Effective NGOs. 25/05/2011 at 4:54 pm By Hans Zomer Earlier this week, I had the opportunity to address the AGM of one of our bigger member organisations. 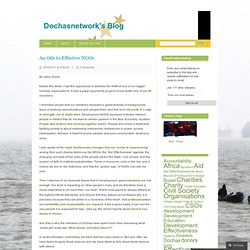 It was a great opportunity to get to know better one of our 46 members. I reminded people that our members represent a great diversity of backgrounds, ways of working, specialisations and perspectives, and that such diversity is a sign of strength, not of duplication. Development NGOs represent ordinary citizens – people in Ireland that do not want to remain passive in the face of poverty, injustice. Why are there so many NGOs? ICT & Development. Amarach study into attitudes to Aid. Dóchas survey of NGOs 2012.