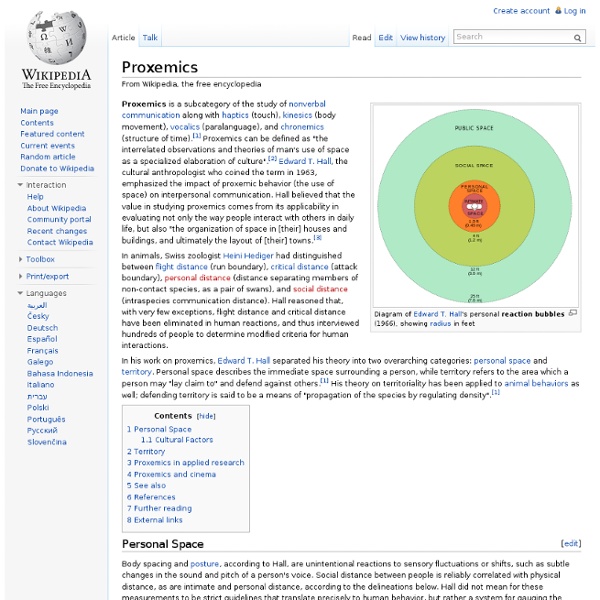 Proxemics is a subcategory of the study of nonverbal communication along with haptics (touch), kinesics (body movement), vocalics (paralanguage), and chronemics (structure of time).[1] Proxemics can be defined as "the interrelated observations and theories of man's use of space as a specialized elaboration of culture".[2] Edward T. Hall, the cultural anthropologist who coined the term in 1963, emphasized the impact of proxemic behavior (the use of space) on interpersonal communication. Hall believed that the value in studying proxemics comes from its applicability in evaluating not only the way people interact with others in daily life, but also "the organization of space in [their] houses and buildings, and ultimately the layout of [their] towns.[3] Personal space[edit] The most portable types of space. kinesthetic factors touching code visual code This category denotes the amount of eye contact between participants. thermal code olfactory code voice loudness Cultural factors[edit] T.

Human bonding Human bonding is the process of development of a close, interpersonal relationship. It most commonly takes place between family members or friends,[1] but can also develop among groups, such as sporting teams and whenever people spend time together. Bonding is a mutual, interactive process, and is different from simple liking. Etymology[edit] The term comes from the 12th century, Middle English word band, which refers to something that binds, ties, or restrains. Early views[edit] Eryximachus reasons that when various opposing elements such as wet and dry are "animated by the proper species of Love, they are in harmony with one another ... Plato concludes that the highest form of love is the greatest. In the 1660s, the Dutch philosopher Spinoza wrote, in his Ethics of Human Bondage or the Strength of the Emotions, that the term bondage relates to the human infirmity in moderating and checking the emotions. Pair bonding[edit] Limerent bond[edit] Parental bonding[edit] Attachment[edit]

Propinquity Effect Explanations > Theories > Propinquity Effect Description | Research | Example | So What? | See also | References Description The more we meet and interact with people, the more likely we are to become friends with them. As we meet people we become familiar and find things we like about them. It is not so much 'birds of a feather flock together' as 'birds who just happen to be near each other grow similar feathers'. Research Festinger, Schachter and Back (1950) followed friendships in a small two-floor apartment building. Example Friendships appear in neighborhoods, workplaces, college classes and other places where people get together. So what? Using it To build trust, make friends. Resisting When you keep bumping into a friendly person, be aware of the potential for them to have ulterior motives. See also Contact Hypothesis, Mere Exposure Theory, Friendship, Law of Attraction References |awa|

Food and Depopulation: International Takeover by the UN (Part 3 of 4) June 16, 2010 by Cassandra Anderson MORPHcity.com Most people think that the United Nations is a noble enterprise and they don’t understand the history and malignant character of the UN. Christina Aguilera, Drew Barrymore and Sean Penn are probably unaware, even though they are UN Ambassadors to the World Food Program (WFP), that the intent of the UN is to implement one world government. The UN WFP, which spreads GMOs in poor countries, is just one tool used for advancing the goals of UN Agenda 21, the overarching blueprint for depopulation and total control. The UN grew out of the League of Nations, which withered after Woodrow Wilson ( Edward House’s puppet), failed to convince Congress that international treaties and entangling alliances were good for America. USAID (US Agency for International Development) is a an independent federal agency that is concerned with economic growth and advancing US foreign policy and interests, under the Secretary of State, Hillary Clinton. F.

Food & Depopulation: Scams and Solutions (Part 4 of 4) June 23, 2010 The Food & Depopulation series of articles has been written for people who think that conspiracies are mere theories, that the American government is working in our best interest and that the United Nations is benevolent. Nothing could be further from the truth; irrefutable proof of this is explained in the previous three articles. 1. 2. The Supreme Court refused to hear any of the facts regarding the dangers and past record of contamination; lone dissenter Justice Stevens said, “the district court did not abuse its discretion when, after considering the voluminous record and making the aforementioned findings, it issued the order now before us.” 3. 4. NGOs (Non Governmental Organizations), in the modern definition, spring from the United Nations and act as ‘consultants’ to the UN; no government representatives are allowed as members. This is how the scam works: • NGOs create policy statements to be adopted by the UN that become international policy. Sources:

Food and Depopulation (Part 2 of 4) Thursday, 10 June 2010 00:00 by Cassandra AndersonMORPHcity.com Monsanto’s Monopoly A monopoly is exclusive control of a commodity or service that makes it possible to manipulate prices. The famous robber baron JD Rockefeller refined this method of monopolization with Standard Oil; he created a cartel (an agreement between companies to avoid competition) with the companies he could not buy or force out of business through extraordinarily corrupt business practices. This article is intended as a brief sketch to explore the expanse of the roots of Monsanto & understand the machinery of a monopoly, therefore, the science and health issues behind GMOs (Genetically Modified Organisms) will not be covered in detail. This is all part of the United Nations Agenda 21 Sustainable Development depopulation program (remember that the Rockefellers have overwhelming influence with the UN). Monsanto’s monopoly is firmly entrenched within the US government: 1. 2. 3. 4. 5. 6. 7. 8. 9.

Food and Depopulation (Part 1 of 4) Tuesday, 08 June 2010 20:32 by Cassandra AndersonMorphcity.com Rockefeller Family The purpose of this article is to give a brief outline of how the elites, and the Rockefellers in particular, are using food as a weapon. Since the Rockefeller family came to power (especially after gaining a monopoly in 1914 with Standard Oil) they have manipulated our government into ruining our financial system by way of the Federal Reserve, energy through oil dependency and food with GMOs (Genetically Engineered Organisms). The official name of this program is Agenda 21 Sustainable Development. While Agenda 21 was introduced in 1992, the elite collectivists, lead by the Rockefellers, have been pushing population control on America and the world for generations. Food control goes hand in hand with population control. The Ludlow Massacre took place at a Rockefeller owned coal mine in Colorado. Why do you think Senator Jay Rockefeller(8) is pushing so hard to censor the Internet? Thanks to F. www.

Chinese environment official challenged to swim in polluted river | Environment A journalist takes a sample of the red polluted water in the Jianhe River in Luoyang, Henan province in December 2011. The sources of the pollution are two illegal chemical plants discharging their production waste water into the rain sewer pipes. Photograph: China Daily/Reuters Widespread outrage against China's environmental issues that began when Beijing's air pollution hit record levels last month has spread to encompass another major public health threat: water pollution. Last week, an eyeglass-retailer executive from Rui'an City, coastal Zhejiang province, offered the city's environmental protection chief Bao Zhenming more than £20,000 to take a 20-minute dip in a highly polluted local river. The Rui'an government responded by saying that most of the river's pollution was caused by individuals, not factories, and could be attributed to overpopulation. China's water pollution woes are not a new story.

9 Horrifying Workplace Conditions You Won't Believe Are in the United States Amazon.com Warehouse Workers in Stifling Heat Face Painful Static Shocks Daily We all think of Amazon.com as the friendly Web store where we buy books, 3 Wolf Moon T-shirts, and more. It turns out, every time you click BUY, you are unleashing a torrent of pain on their warehouse workers. In a scathing report from investigative magazine Mother Jones, an undercover warehouse worker at a company that ships for Amazon was forced to work 12 hour days, sometimes in 100+ degree heat. Foreign Student Hell at Hershey's Guest Worker Program Students coming from abroad to study or work in America have hopes they will be treated well and learn about the wonders of our Capitalist system. Wal-Mart Denys Overtime, Locks in Workers Overnight Wal-Mart, one of the largest employers in the United States and elsewhere, has long been plagued by allegations of worker abuse. T-Mobile Employees Forced to Wear Dunce Caps Fishing: The Most Dangerous Job is Also The Lowest Paying Wait... the trophy is for WHAT?!

Our Finite World | Providing a wide view of what may be ahead The Influence Landscape: The Evolving Power of Shapers & Influencers Type the word “influence” into Google and it returns 142 million results. What is going on? The last two decades have seen major changes in the world which have reshaped the influence landscape – with power shifting away from position and traditional measures of status towards a much more fluid, fickle and democratic power structure. Today it is about the power of “me” and “we” more than the power of “they.” Influence is Power Essentially influence is about power, the ability to shift the actions, attitudes and behaviors of others, to be a compelling force leading the way towards a goal, an aspiration or a way of living or working. Even as recently as twenty or thirty years ago, the people with influence were relatively easy to spot: the President or Prime Minister of a nation, religious leaders, CEOs, and probably your parents. The Emancipation of Influence The last twenty years have seen unprecedented shifts in the influence landscape – a new emancipation. The Influence Landscape

Max-Neef Model of Human-Scale Development Kath Fisher: "Manfred Max-Neef is a Chilean economist who has worked for many years with the problem of development in the Third World, articulating the inappropriateness of conventional models of development, that have lead to increasing poverty, massive debt and ecological disaster for many Third World communities. He works for the Centre for Development Alternatives in Chile, an organisation dedicated to the reorientation of development which stimulates local needs. Max-Neef and his colleagues have developed a taxonomy of human needs and a process by which communities can identify their "wealths" and "poverties" according to how these needs are satisfied. The main contribution that Max-Neef makes to the understanding of needs is the distinction made between needs and satisfiers. Graphic with 36 cell matrix at

Proxemics - The study of how people use and relate to space (territory). The method normally relies on observation, but interviewees can be asked to talk about their experience. Where do people sit in a meeting? How does open space in a housing estate influence behaviour? How close do people stand to each other? What about the placing of deckchairs on a beach? How does the use of space vary between different cultures?