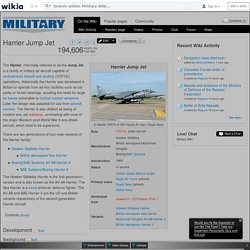 Historically the Harrier was developed in Britain to operate from ad-hoc facilities such as car parks or forest clearings, avoiding the need for large air bases vulnerable to tactical nuclear weapons. Later the design was adapted for use from aircraft carriers. Hawker Siddeley Harrier – Jump Jet » Fighter Aircraft. The Hawker Siddeley Harrier was a phenomenal military aircraft as it was the first operational close-support and reconnaissance fighter aircraft using vertical/short takeoff and landing (V/STOL) capabilities and the only truly successful V/STOL design of the several aircrafts that came in 1960s. 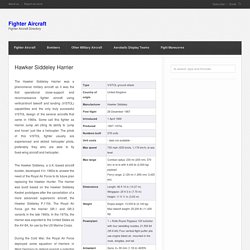 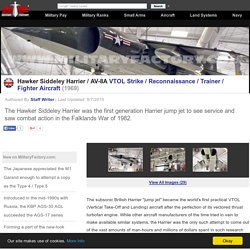 While other aircraft manufacturers of the time tried in vain to make available similar systems, the Harrier was the only such attempt to come out of the vast amounts of man-hours and millions of dollars spent in such research during the Cold War. The Harrier went on to see relatively successful combat action with British air elements in the upcoming Falklands War and has subsequently become one of the most identifiable aircraft in the world.

Her vertical and horizontal capabilities have been the marvel of many-an-air show aficionado for decades and continue to do so even today - some forty years after her inception. British unique fighter Harrier Jump Jet. The unique British fighter aircraft serves UK defense for more than 40 years. 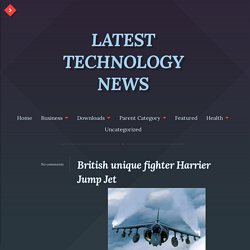 This fighter aircraft is world's only vertical take off and landing fighter aircraft which can beflown from both airfields on land & from smaller aircraft carrier on sea. The cause that make this fighter unique & internationally reputed is that it hovers like a helicopter & flies like a fighter .During the Falklands War Harriers shot down 24 Argentinian jets without a single air-to-air loss. Harrier jump jet was first designed and built by Hawker Aircraft Limited in 1957. The Harrier Jump Jet. It’s Not Surprising Two Harrier Jets Have Crashed in a Month. An AV-8B Harrier jet crashed into a strip of residential homes in Imperial, California this week, destroying three houses. 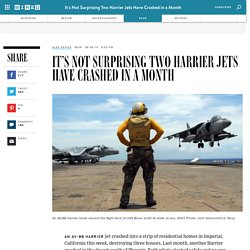 Last month, another Harrier crashed in the desert south of Phoenix. Both pilots ejected safely and no one was injured in either crash. The Harrier is among the coolest, most ingenious aircraft ever designed, but the downsides of its design and a long history of failures mean these most recent crashes are hardly surprising. Developed in the 1960s, the Harrier is marvelous for its ability to hover like a helicopter. The jet engine pumps air through four nozzles, two on each side of the fuselage, right under the wings. Harrier jump-jets sold 'for peanuts' It is understood that the majority of the 40 serviceable Harrier GR7 and GR9s will be sent to America where their engines and general hardware such as cockpits and flaps will be used to service USMC aircraft. 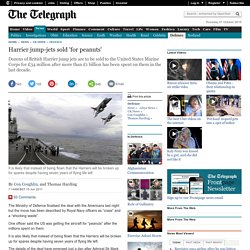 The fleet of ageing US Harrier AV8Bs has to remain in service for several years longer than planned because their replacement, the jump jet variant of the Joint Strike Fighter, is years behind schedule. Admiral Sir John “Sandy” Woodward, the commander of the Falklands Task Force described the decision as “crass beyond belief”. “The Americans have got themselves a bargain as our Government does not know what it’s doing. This is a shocking waste of taxpayers money. “These Harriers should be flying off a Navy aircraft carrier today bombing Libya and bringing the campaign to a quick conclusion but instead they are being flogged for scrap.” A Ministry of Defence insider said: “If we are going to do anything with them sell the Harriers to the US is not a bad option in terms of cooperation.” 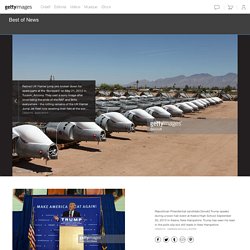 Photo d'actualité Arizona,Centre d'intérêt,Désert,Exclusivité,Horizontal,Ingénieur,Machinerie,Pièce de rechange,Retraite,Travailler,Tucson,États-UnisPhotographer BarcroftCollection: Barcroft Media ***EXCLUSIVE*** TUCSON, AZ - MAY 21: Retired UK Harrier jump jets broken down for spare parts at the 'Boneyard' on May 21, 2012 in Tucson, Arizona. They cast a sorry image after once being the pride of the RAF and Brits everywhere - the rotting remains of the UK Harrier Jump Jet fleet now awaiting their fate at the world's biggest aircraft cemetery.

New pictures show how the jets have been stripped of their once-iconic noses and sheared of the 30-foot wings that enabled them to soar up to 662mph over enemy positions. The planes once provided crucial support for British troops on land and sea before being controversially scrapped by the UK Government and sold to the US for a knockdown $180m. Carriers without Harriers: budget cuts leave MoD with jump jet-shaped hole. Nick Clegg, the deputy prime minister, today assured workers he met at the Rosyth docklands that the two aircraft carriers being constructed in Scotland will be spared from cuts to defence spending that aims to slash the armed forces budget by 8% by 2015. 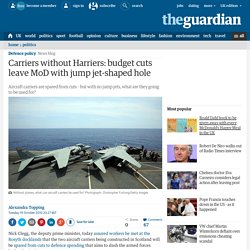 But the hand that giveth can also taketh away – as every government department will undoubtedly learn tomorrow – and even as Clegg was being welcomed by relieved dockers, the news was sinking in of the other cuts to the armed forces which David Cameron had announced. These cuts include the UK's Harrier jump jets, which often take off from – yes, you guessed it – aircraft carriers. Two generations of Harrier pilots attack David Cameron over jets. David Cameron was today outmanoeuvred by two generations of Harrier pilots who stressed the human cost of scrapping the jets. 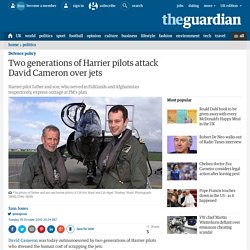 First came a fusillade from Lieutenant Commander Kris Ward, delivered as the prime minister visited the armed forces operations headquarters in London. "I am a Harrier pilot and I have flown 140-odd missions in Afghanistan, and I am now potentially facing unemployment," the 37-year-old naval officer told Cameron. "How am I supposed to feel about that, please, sir? " A little later, his father (right), Commander Nigel "Sharkey" Ward — who rose to fame during the Falklands war as the commander of 801 Naval Air Squadron from HMS Invincible — delivered another strafing. AVIATION: U.S. Buying Retired Harrier Jets from Britain. November 14, 2011 at 11:10 pm Jump Jets Gannett’s Navy Times/Defense News publications are reporting that the U.S. 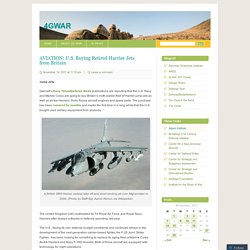 Navy and Marine Corps are going to buy Britain’s moth-balled fleet of Harrier jump jets as well as all the Harriers’ Rolls Royce aircraft engines and spare parts. The purchase has been rumored for months and marks the first time in a long while that the U.S. bought used military equipment from anybody. A British GR9 Harrier vertical take off and short landing jet over Afghanistan in 2008.

Urban GhostsFarewell to the Harrier: The Jump Jet Jumps No More. Last year artist Fiona Banner exhibited a Harrier Jump Jet at London’s Tate Britain, hung like a “captive bird” as part of a modern art exhibit called Harrier and Jaguar. Symbolically turning the combat jet from brutal warplane to submissive beast found mixed emotions among aviation enthusiasts, but few would have imagined that less than a year later Britain would retire its Harriers amid controversial defence cuts and Banner’s image would become reality. In this article we take a visual tour of the Harrier’s distinguised career and, true to our Urban Ghosts mission, explore the rusting afterlife of one of Britain’s finest aviation achievements. The Harrier Family.

Aircraft in fiction. Real military aircraft, such as this Grumman F-14 Tomcat, frequently appear in works of fiction. Aircraft in fiction covers the various real-world aircraft that have made significant appearances in fiction over the decades, including in books, films, toys, TV programs, video games, and other media. These appearances spotlight the popularity of different models of aircraft, and showcase the different types for the general public.

British Aerospace Harrier - Scramble. From Scramble - The Aviation Magazine History The development of the Harrier started in the late 1950s and culminated in the Hawker P.1127. The P.1127 was a light prototype with a simple wing design, to test the engine concept and stability. The engine, the Rolls-Royce Pegasus, is a unique concept, with its four movable exhausts and many other small exhausts (JCV: Jet Control Valve) in several places in the fuselage for manoeuvrability. The wingtip holds retractable struts with small support wheels. Production All first generation Harriers and Sea Harriers were built in the UK, mainly at the Kingston factory, with major components supplied by the Brough and Hamble sites of Hawker Siddeley/BAe.

Versions. Boeing AV-8B Harrier II - Scramble. From Scramble - The Aviation Magazine History Early history An original agreement between the British and American governments made for acquisition of foreign-made AV-8 Harriers concluded in a 15-year agreement in which McDonnell Douglas could lay claim to local production of the aircraft (this never took place) as well as take on any future derivative development. Harrier, Hawker/BAe.