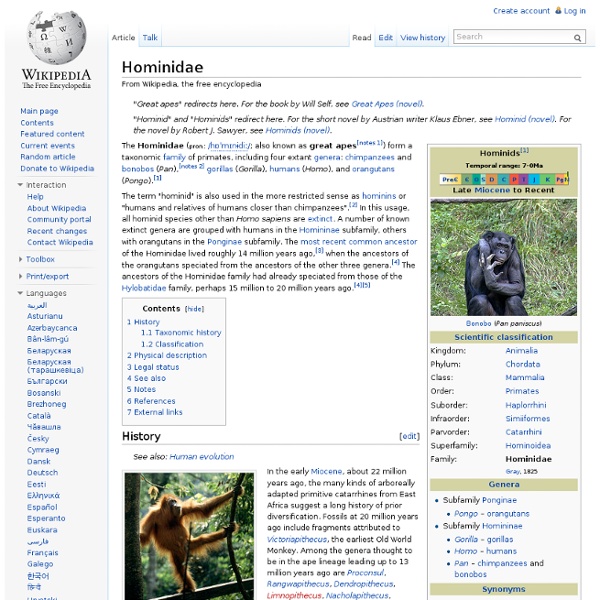 The Hominidae (/hɒˈmɪnɨdiː/; also known as great apes[notes 1]) form a taxonomic family of primates, including four extant genera: The term "hominid" is also used in the more restricted sense as hominins or "humans and relatives of humans closer than chimpanzees".[2] In this usage, all hominid species other than Homo sapiens are extinct. A number of known extinct genera are grouped with humans in the Homininae subfamily, others with orangutans in the Ponginae subfamily. History[edit] Species close to the last common ancestor of gorillas, chimpanzees, bonobos and humans may be represented by Nakalipithecus fossils found in Kenya and Ouranopithecus found in Greece. Taxonomic history[edit] The classification of the great apes has been revised several times in the last few decades. The primatological term hominid is easily confused with a number of very similar words: Especially close human relatives form a subfamily, the Homininae. Classification[edit] Extant[edit] Fossil[edit] Family Hominidae Related:  Family

Ponginae Ponginae is a subfamily in the hominidae family. Once a diverse lineage of Eurasian apes, it is now represented by two species of orangutans, the Sumatran orangutan (Pongo abelii), and the Bornean orangutan (Pongo pygmaeus). The Sumatran orangutan is now listed as critically endangered by the IUCN and the Bornean orangutan is listed as endangered.[1][2] Evolutionary history[edit] The first pongine genera appear in the Miocene, Sivapithecus and Khoratpithecus,[3][4] six or seven million years before evidence of orangutans was found from Pleistocene south-east Asia and southern China.[5] Ponginae may also include the genera Lufengpithecus, Ankarapithecus, and Gigantopithecus. The most well-known fossil genus of Ponginae is Sivapithecus, consisting of several species from 12.5 million to 8.5 million years ago. Taxonomy[edit] Ponginae[7] References[edit] Jump up ^ Singleton, I., Wich, S.A. & Griffiths, M. (2008).

Homininae Homininae is a subfamily of Hominidae that includes humans, gorillas, chimpanzees, bonobos and some extinct relatives; it comprises all hominids that arose after the split from orangutans (Ponginae). The Homininae cladogram has three main branches, which lead to gorillas, chimpanzees and bonobos, and humans. There are several extant species of chimpanzees and gorillas, but only one human species remains, although traces of several hypothetical species have been found with dates as recent as 12,000 years ago (Homo floresiensis, Homo denisova). History of discoveries and classification[edit] Today, chimpanzees and gorillas live in tropical forests with acid soils that rarely preserve fossils. Taxonomic classification[edit] Homininae[5][6] Evolution[edit] Evolution of bipedalism[edit] Recent studies of Ardipithecus ramidus (4.4 million years old) and Orrorin tugenensis (6 million years old) suggest some degree of bipedalism. Brain size evolution[edit] See also[edit] Notes[edit] Citations[edit]

Hominini Through DNA comparison, scientists believe the Pan / Homo divergence occurred between 5.4 and 6.3 million years ago, after an unusual process of speciation that ranged over 4 million years.[5] Few fossil specimens on the Pan side of the split have been found, the first fossil chimpanzee discovery being published in 2005,[6] dating to between 545 ± 3 kyr (thousand years) and 284 ± 12 kyr via Argon-argon dating, from Kenya's East African Rift Valley. All of the extinct genera listed in the table to the right are ancestral to Homo, or are offshoots of such. However, both Orrorin and Sahelanthropus existed around the time of the split, and so may be ancestral to all three extant species. In the proposal of Mann and Weiss (1996),[7] the tribe Hominini includes Pan as well as Homo, but within separate subtribes. Homo (and, by inference, all bipedal apes) is in the subtribe Hominina, while Pan is in the subtribe Panina. Wood (2010) discusses the different views of this taxonomy.[8]

Hominina Taxonomy[edit] See also[edit] List of human evolution fossils (with images) References[edit] Tetraodontidae Pufferfish are generally believed to be the second-most poisonous vertebrates in the world, after the golden poison frog. Certain internal organs, such as liver, and sometimes the skin, contain tetrodotoxin and are highly toxic to most animals when eaten; nevertheless, the meat of some species is considered a delicacy in Japan (as 河豚, pronounced as fugu), Korea (as 복 bok or 복어 bogeo ), and China (as 河豚 hétún) when prepared by specifically trained chefs who know which part is safe to eat and in what quantity. The Tetraodontidae contain at least 120 species of puffers in 19 genera.[1] They are most diverse in the tropics, relatively uncommon in the temperate zone, and completely absent from cold waters. Ecology and life history[edit] Although most species live in inshore and estuarine waters, 29 species spend their entire lifecycles in fresh water. Natural defenses[edit] The puffer's unique and distinctive natural defenses help compensate for its slow locomotion. Inflated Arothron