Patheos. Thank you for your interest in Patheos newsletters! 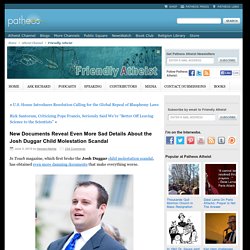 Please enter your email address below and click the "Subscribe" button. Thank you for your subscription. You can visit your Preference Center to complete your profile and see what else we have to offer. We apologize, we were unable to complete your subscription at this time, please try again later. What the Rush to Defend Josh Duggar Tells Us About Conservative Christian Morality. Thank you for your interest in Patheos newsletters! 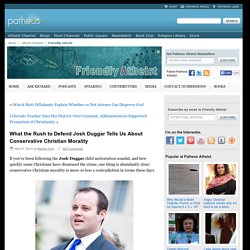 Follow Raw Story! The embattled Duggar family heard a lot about pornography Sunday when its members attended a sermon given by the Rev. Jeff Crawford at Cross Church in Springdale, Arkansas, Entertainment Tonight wrote in an exclusive report. Crawford spoke about porn in a sermon that appeared to address at least one of the former stars of the TLC… Duggar Family Stages Food Donation, Then Takes Food Back. The Duggar family of 19 Kids and Counting fame are known for their firm belief system and adherence to their religion — but when it comes to feeding the poor, it seems as though the Duggars may need to work on practicing what they preach. 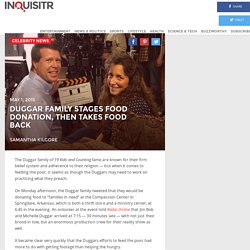 On Monday afternoon, the Duggar family tweeted that they would be donating food to “families in need” at the Compassion Center in Springdale, Arkansas, which is both a thrift store and a ministry center, at 6:45 in the evening. Duggar sisters and mom appear on TLC special about sex abuse: ‘It shouldn’t be a taboo subject’ Jessa Seewald and Jill Dillard appear on 'The Kelly File' on June 5, 2015. 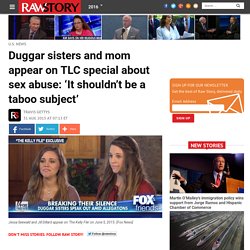 [Fox News] Two of Josh Duggar’s molestation victims and their mother took part in a television special on sexual abuse on the same network that canceled their popular reality show. Jessa Seewald and Jill Dillard, who admitted in May during a Fox News interview that their brother had molested them, appeared Sunday night, along with their mother, Michelle Duggar, on TLC’s “Breaking the Silence.” “I was so glad that my girls and I were able to do this together and that we could just be a support and encouragement to each other to be able to gain more information about this important topic,” Michelle Duggar said.

The 27-year-old Josh Duggar, who resigned from his job with the anti-LGBT Family Research Council after the decade-old sex abuse revelations were reported, entered a long-term rehabilitation facility last week after admitting to cheating on his wife. Doubts Raised About TLC's Vetting Of Duggars. For most of this week, it appeared that TLC could have significantly limited the damage to its brand caused by the controversy over the Duggar family by canceling “19 Kids and Counting” outright. 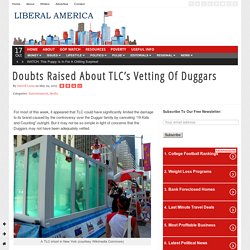 But it may not be so simple in light of concerns that the Duggars may not have been adequately vetted. A TLC shoot in New York (courtesy Wikimedia Commons) A prominent reality television executive anonymously told TheWrap that he was concerned that the Duggars had bypassed TLC’s normal vetting process. For those who don’t know, “19 Kids and Counting” grew out of several one-hour specials focused on the Duggars that aired on TLC’s sister network, Discovery Health. According to the executive, while cable networks don’t have as “professional” a process as over-the-air networks, even on cable the screening process for full-fledged series is much more rigorous than the one for one-hour documentaries. Does Old TLC Blog Post On Modesty By Michelle Duggar Blame Victims For Being Assaulted? In light of the discovery that Jim Bob and Michelle Duggar failed to properly report that their eldest son, Josh, assaulted several girls in his teen years, a lot of things the Duggars have done and said in the past on TLC and elsewhere look really creepy. 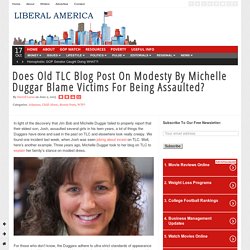 Christian Counseling and Homeschool Program Embraced By Duggars Funded By Hobby Lobby. It was little surprise to learn that there is a close connection between the anti-women’s rights Hobby Lobby patriarch and the twisted Quiverfull Duggar family. 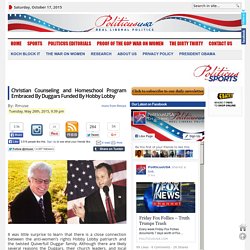 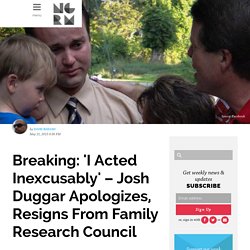 Will "19 Kids and Counting" survive? Change the conversation, change the world Share this Editor's note: see update at bottom. It's been a whirlwind. In Touch magazine just hours ago published a 33-page police report that reveals Josh Duggar, around the age of 14, sexually assaulted five girls, including family members, and allegedly admitted to at least one of the assaults. Report: Josh Duggar Investigated For Molesting Five Girls, Including Family Members, As A Teen. Bill O’Reilly & Josh Duggar’s Shame Is America’s Shame: How Abusive And Violent Men Get Away With It. Bill O’Reilly is alleged to have choked his wife and dragged her down a set of stairs. 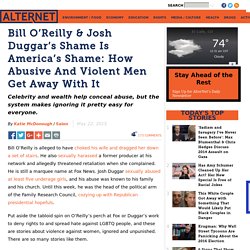 He also sexually harassed a former producer at his network and allegedly threatened retaliation when she complained. He is still a marquee name at Fox News. Josh Duggar sexually abused at least five underage girls, and his abuse was known to his family and his church. Until this week, he was the head of the political arm of the Family Research Council, cozying up with Republican presidential hopefuls. After He Was Accused of Child Molestation, Josh Duggar’s Family Did Everything Wrong. Bombshell Duggar Police Report: Jim Bob Duggar Didn’t Report Son Josh’s Alleged Sex Offenses For More Than a Year. WARNING: Graphic descriptions contained in police report. Jim Bob Duggar waited more than a year after his son, Josh, confessed to sexually molesting several female minors before contacting police, In Touch Magazine is reporting exclusively, based on information contained in the official police report.

(Photo Credit: Getty Images) What’s more, Jim Bob informed the elders of his church about Joshua’s actions and they waited three months before contacting authorities. The explosive new information is contained in a Springdale, Ark., police report obtained by In Touch magazine. RELATED: Josh Duggar Breaks His Silence Regarding Child Molestation Allegations. 5 Most Appalling "Christian" Defenses of Duggars. Holiday greetings from the Duggar family. Since it was revealed that Josh Duggar had been accused of molestation and his reality-show star parents did little in response, there has been an expected backlash. However, some people have made some pretty strange arguments about Duggar's behavior, often invoking religion in the process. 3 Questions The Duggars Don't Want To Answer. On Wednesday night, Jim Bob and Michelle Duggar will speak with Fox News’ Megyn Kelly, their first interview since it was revealed that their oldest son, Josh, repeatedly molested his sisters as a teenager.

Kelly has promised that her interview will be “tough but fair,” adding “this isn’t going to be a cross-examination of a family.” Kelly even suggested that the interview was an opportunity for the Duggars to save “their show and reputation.” TLC has removed the Duggars’ reality show from its programming lineup but not officially canceled it. According to Kelly, the Duggars believe their show is “not totally done.”

3 Questions The Duggars Don't Want To Answer. What About the Girls? The Duggar Scandal and the Cost of Fundamentalism. That Time When Bernie Sanders Met Sandra Bland's Mother. If you want to know the real measure of a person, it’s what they do when they think no one is looking. Five days prior to the first Democratic presidential debate, Bernie Sanders was in Washington D.C. doing his job. Everybody’s got to eat and Bernie decided to dine at the East Street Café, a Thai restaurant at Union Station, just a few blocks away from the Capitol building.

At a table across the room, the Reverend Hannah Adair Bonner, pastor at St. John’s Church in Houston, noticed the man sitting alone at the table tucked into a corner. Rev. The Reverend wasn’t sure the man she was looking at was Bernie Sanders, but her sister, who has been in D.C. for 20 years, assured her it was. He replied, “Yes, please.”

Rev. The women asked if they could have their picture taken with him and he said yes. That is the measure of the man. As Rev. #SayHerName #SandraBland #BlackLivesMatter #FeelTheBern Ann Werner is the author of thrillers and other things. What About the Girls? The Duggar Scandal and the Cost of Fundamentalism. Fox News Spent Less Than Two Minutes Discussing the Josh Duggar Child Molestation Scandal. The Duggar Family Scandal: A reader. The Duggar Family Scandal: A reader. The Duggars Aren't Just a Family, They're a Cult. The Duggar Homeschool Program's Terrifying Advice on Sexual Assault. Quiverfull of Shit: a Guide to the Duggars' Scary Brand of Christianity. The Duggar Girls Learned to Kiss From Jim-Bob and Josh.

Duggar Dad's Political Platform: Incest Should Be Punishable by Death. Jill Duggar And Hubby Rejected As Missionaries Due To Lack Of Education — Fans Who Funded Trip Are Screwed. Via The Inquisitr So it turns out that not only are the Duggars stupid, but everyone they marry is, too. A missionary trip that Jill Duggar-Dillard and her husband Derick received donations for is never going to happen, and the fans who donated are likely never going to see their money again.

In June, Jill took to the family website to beg fans to fund a missionary trip to El Salvador for herself, husband, and infant son. The following is an excerpt from the site: “God has put a desire in our hearts to serve Him internationally for longer than the typical short-term mission trip, but we didn’t know yet how God would fulfill that desire in us.” The funny side of this story is why the missionary trip is never going to happen. The lurch-looking fellow and his Plain Jane wife were informed that in order to qualify for the missionary trip, they would need something neither of them possess…an education. Via World of Wonder Double derp. Jill Duggar and husband were not cleared for missionary work by anti-LGBT Baptist group. Derick and Jill Dillard with their son, Israel, in El Salvador (Dillard Family blog) While Jill Duggar and her husband, Derick Dillard, have raised funds for what they called missionary work in El Salvador, the couple has not been certified to perform in that capacity, The Inquisitr reported.