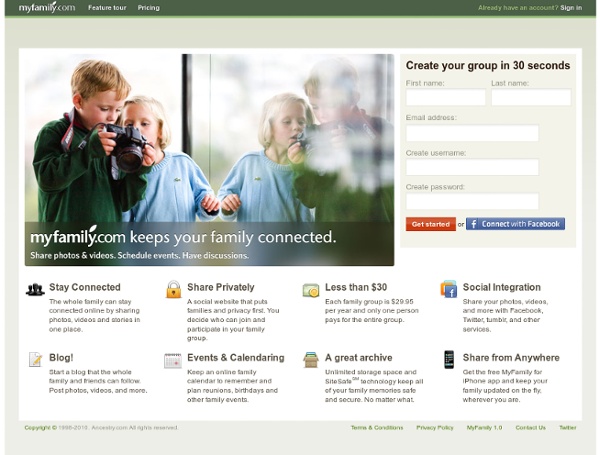 Family Websites, Family Videos, Family Photos, Family Social Network - Family Crossings™ - Tel: 1-877-765-2655 FamilyLeaf, The YC-Backed Social Network For You And Your Kin, Adds 4 Advisors And A Snapchat-Like Feature For Sharing When the family-based social network FamilyLeaf first made its debut as part of the Y Combinator Spring 2012 class, the startup set itself up as a kind of anti-Facebook: a place where relatives could come together in a private network built with family networking in mind without some of the trappings like advertising and the wider sharing with your network of friends (and, as we’ve seen, friends of friends) that have put some people off the world’s biggest social network. Fast-forward to 2013, and that concept is now evolving. People who have opted out of the Facebook scene can still use FamilyLeaf, but for those who have not, the startup is getting ready to turn on a Facebook integration so users can tap their social graphs to help find family connections. The move is part of a bigger set of changes at FamilyLeaf, which — much like families themselves — is now growing up. The new advisors – Spencer Rascoff, CEO of Zillow; Nirav Tolia, CEO of Nextdoor; Rebecca Meissner, former