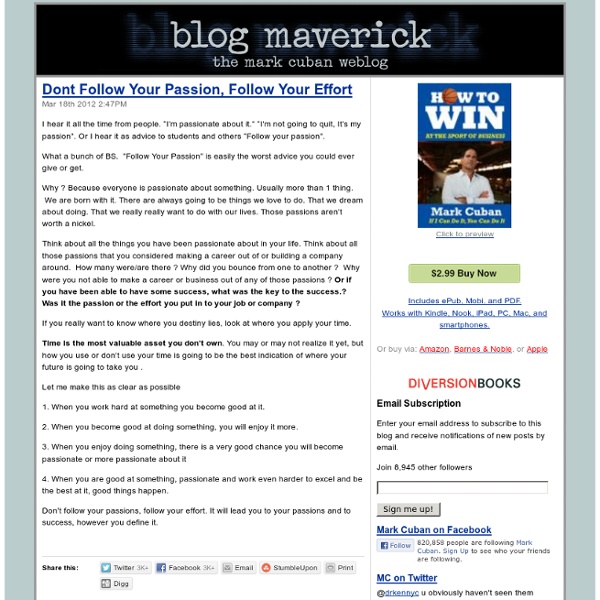 I hear it all the time from people. “I’m passionate about it.” “I’m not going to quit, It’s my passion”. Or I hear it as advice to students and others “Follow your passion”. What a bunch of BS. Why ? Think about all the things you have been passionate about in your life. If you really want to know where you destiny lies, look at where you apply your time. Time is the most valuable asset you don’t own. Let me make this as clear as possible 1. 2. 3. 4. Don’t follow your passions, follow your effort.

The secret of self-control In the late nineteen-sixties, Carolyn Weisz, a four-year-old with long brown hair, was invited into a “game room” at the Bing Nursery School, on the campus of Stanford University. The room was little more than a large closet, containing a desk and a chair. Carolyn was asked to sit down in the chair and pick a treat from a tray of marshmallows, cookies, and pretzel sticks. Carolyn chose the marshmallow. Although Carolyn has no direct memory of the experiment, and the scientists would not release any information about the subjects, she strongly suspects that she was able to delay gratification. Footage of these experiments, which were conducted over several years, is poignant, as the kids struggle to delay gratification for just a little bit longer. Most of the children were like Craig. The initial goal of the experiment was to identify the mental processes that allowed some people to delay gratification while others simply surrendered. Mischel was born in Vienna, in 1930.

The End of Solitude By William Deresiewicz What does the contemporary self want? The camera has created a culture of celebrity; the computer is creating a culture of connectivity. As the two technologies converge — broadband tipping the Web from text to image, social-networking sites spreading the mesh of interconnection ever wider — the two cultures betray a common impulse. So we live exclusively in relation to others, and what disappears from our lives is solitude. I once asked my students about the place that solitude has in their lives. To that remarkable question, history offers a number of answers. Like other religious values, solitude was democratized by the Reformation and secularized by Romanticism. But it is with Romanticism that solitude achieved its greatest cultural salience, becoming both literal and literary. Modernism decoupled this dialectic. The Romantic ideal of solitude developed in part as a reaction to the emergence of the modern city. I speak from experience.

We need to talk about TED In our culture, talking about the future is sometimes a polite way of saying things about the present that would otherwise be rude or risky. But have you ever wondered why so little of the future promised in TED talks actually happens? So much potential and enthusiasm, and so little actual change. Are the ideas wrong? I write about entanglements of technology and culture, how technologies enable the making of certain worlds, and at the same time how culture structures how those technologies will evolve, this way or that. So my TED talk is not about my work or my new book – the usual spiel – but about TED itself, what it is and why it doesn't work. The first reason is over-simplification. At this point I kind of lost it. So I ask the question: does TED epitomize a situation where if a scientist's work (or an artist's or philosopher's or activist's or whoever) is told that their work is not worthy of support, because the public doesn't feel good listening to them? What is TED? T – E – D.