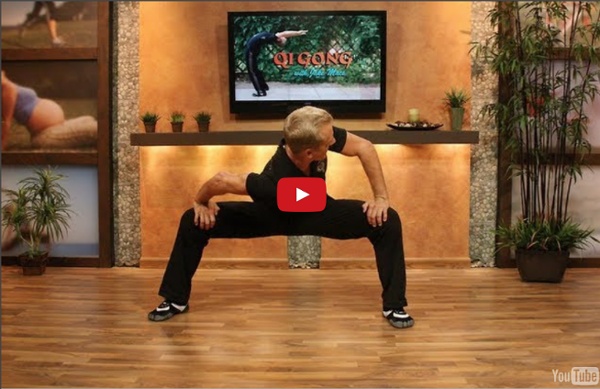 Fun With Qigong » The Eight Brocades These famous and widespread Qigong exercises are at least 800 years old. They are used for gently training the intrinsic health of the muscles, joints, connective tissues, digestion, the spine, and more. The Eight Brocades engage the physical body wholly, bringing flowing, resilient, flexible, strength. There are many different versions of the Eight Brocades. The version below is from Shanghai Lan Shou teacher Master Wu Ji, via Bob Lau, with a few small changes. (Lan Shou is a type of Kung Fu that is usually practiced at slow speeds, and gently.)

Eight Section Brocade Chi Kung, Ba Duan Jin Qigong, Eight Treasures Exercise Routine from China Research by Michael P. Garofalo The use of calisthenics, stretching, and breathing exercises to maintain good health, fight disease, and enhance the quality of life is of great antiquity. This type of physical activity has a long documented history in both India and China. Artwork, medical manuals, folklore, treatises, scriptures and reports on the subject go back over 2,500 years. Likewise, military physical conditioning techniques, and training with military weapons (bow, sword, staff, saber, knife, spear, etc.) are of comparable antiquity. Chakras Chakras Chakra means Wheel in Sanskrit. Consciousness and energy move from one frequency to another in spiraling fashion. The body has energy centers that look like spinning wheels and are called Chakras. They allow energy to flow from one part of the body to another. As with all things in our reality, they are linked to sound, light and color.

Natural Health Zone 8 Nutritional Powerhouses You Can Add To Your Water To Support Digestion, Hydration and Cleansing - Natural Health Zone Photo (under license) – © Magdalena Kucova – fotolia.com How many of us actually follow the “eight glasses of water a day” rule? Plain water can be a bore to drink, especially if a person’s day doesn’t include strenuous activities. But there are ways to help make water more inviting to drink! Adding herbs, fruits, and vegetables to your water not only adds flavor but might make your water healthier.

Ernest Hemingway Ernest Miller Hemingway (July 21, 1899 – July 2, 1961) was an American author and journalist. His economical and understated style had a strong influence on 20th-century fiction, while his life of adventure and his public image influenced later generations. Hemingway produced most of his work between the mid-1920s and the mid-1950s, and won the Nobel Prize in Literature in 1954. He published seven novels, six short story collections, and two non-fiction works.

The Pineal Gland (The Third Eye), Chakras and Solfeggio Frequencies Please watch on full screen with a peaceful, open mind. Whether we are aware of it or not, we are all telepathic and are constantly emitting subtle vibrations. If we are sensitive, we can become more aware of the vibrations given off by people, nature and the universe in general. DIY Foot Reflexology: 7 Pressure Points To Reduce Stress & Boost Metabolism - Tiptop Home Remedies You maybe don’t know, but there are thousands of nerve endings on human feet. Can you imagine that massaging certain points on your feet can help you not only to relax, but also to improve your whole body work? By pressing certain points, you can connect to your hypothalamus, thyroid and other organs. It only takes a few minutes, massage your feet with your big finger and index finger and enjoy yourself.

25 Great Thinkers Every College Student Should Read By Donna Scott College is for expanding one’s intellectual horizons. Unfortunately, drinking and having fun, can distract from learning about history’s great thinkers. From Mark Twain to Confucius, an educated individual should posses some knowledge of certain philosophers, artists and thinkers. Here are 25 great thinkers every college student should read, even if professors don’t assign them. Western Philosophers

Baduanjin qigong The Baduanjin qigong(八段錦) is one of the most common forms of Chinese qigong used as exercise.[1] Variously translated as Eight Pieces of Brocade, Eight-Section Brocade, Eight Silken Movements and others, the name of the form generally refers to how the eight individual movements of the form characterize and impart a silken quality (like that of a piece of brocade) to the body and its energy. The Baduanjin is primarily designated as a form of medical qigong, meant to improve health.[2] This is in contrast to religious or martial forms of qigong. However, this categorization does not preclude the form's use by martial artists as a supplementary exercise, and this practice is frequent.[2]