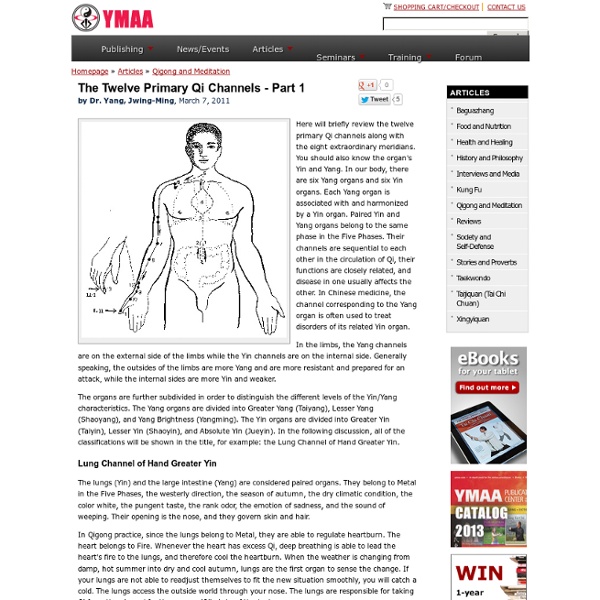 Here will briefly review the twelve primary Qi channels along with the eight extraordinary meridians. You should also know the organ's Yin and Yang. In our body, there are six Yang organs and six Yin organs. In the limbs, the Yang channels are on the external side of the limbs while the Yin channels are on the internal side. The organs are further subdivided in order to distinguish the different levels of the Yin/Yang characteristics. Lung Channel of Hand Greater Yin The lungs (Yin) and the large intestine (Yang) are considered paired organs. In Qigong practice, since the lungs belong to Metal, they are able to regulate heartburn. Breathing is considered a strategy for leading Qi to the extremities such as skin and hair. The lungs are sensitive to emotional changes, especially when you are sad or angry. Because the lungs are usually the first to be attacked by exogenous diseases, they are called the Delicate Organ. Large Intestine Channel of Hand - Yang Brightness End of Part 1

Welcome to the National Qigong Association (Chi Kung) Qigong Energy & Magnets Baduanjin qigong The Baduanjin qigong(八段錦) is one of the most common forms of Chinese qigong used as exercise.[1] Variously translated as Eight Pieces of Brocade, Eight-Section Brocade, Eight Silken Movements and others, the name of the form generally refers to how the eight individual movements of the form characterize and impart a silken quality (like that of a piece of brocade) to the body and its energy. The Baduanjin is primarily designated as a form of medical qigong, meant to improve health.[2] This is in contrast to religious or martial forms of qigong. However, this categorization does not preclude the form's use by martial artists as a supplementary exercise, and this practice is frequent.[2] History[edit] This exercise is mentioned in several encyclopedias originating from the Song Dynasty. Nineteenth century sources attribute the style to semi-legendary Chinese folk hero General Yue Fei,[4] and describe it as being created as a form of exercise for his soldiers. The sections[edit]