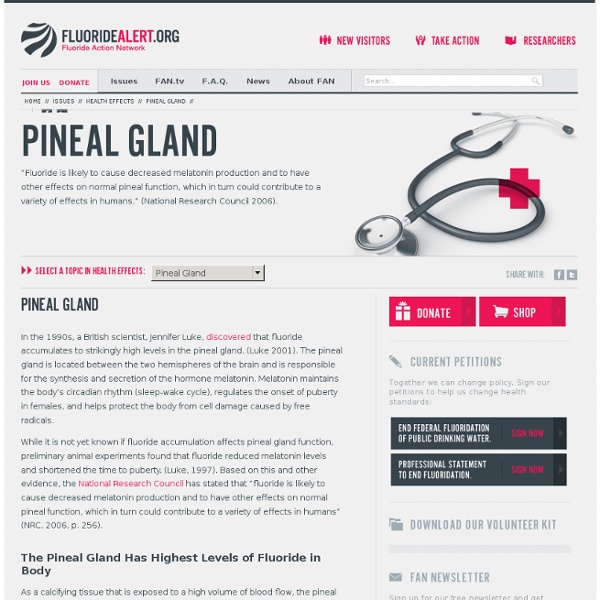 In the 1990s, a British scientist, Jennifer Luke, discovered that fluoride accumulates to strikingly high levels in the pineal gland. (Luke 2001). The pineal gland is located between the two hemispheres of the brain and is responsible for the synthesis and secretion of the hormone melatonin. Melatonin maintains the body’s circadian rhythm (sleep-wake cycle), regulates the onset of puberty in females, and helps protect the body from cell damage caused by free radicals. While it is not yet known if fluoride accumulation affects pineal gland function, preliminary animal experiments found that fluoride reduced melatonin levels and shortened the time to puberty. (Luke, 1997). The Pineal Gland Has Highest Levels of Fluoride in Body As a calcifying tissue that is exposed to a high volume of blood flow, the pineal gland is a major target for fluoride accumulation in humans. Fluoride and Earlier Puberty in Girls Farkas G, et al. (1983).

The Mammalian Pineal Gland May Be The Third Eye Author: Prof. Lili Feng and et al 'Modern medical dissection has already discovered that the front section of the pineal gland is equipped with the complete structure of a human eye. Because it grows inside one's skull, it is thus said to be a vestigial eye. Whether it is a vestigial eye or not, our community of cultivators has reservations. Articles - Fluoride & the Pineal Gland: Study Published in Caries Research Fluoride & the Pineal Gland: Study Published in Caries Research International Fluoride Information Network March 27, 2001 IFIN Bulletin #269: Fluoride and the pineal gland. Luke published. Dear All, The wheels of science grind very slowly. Finally, the first half of the work that was the subject of Jennifer Luke's Ph.D. thesis; presentation in Bellingham, Washington (ISFR conference) in 1998 and a videotaped interview I had with her (see www.fluoridealert.org/videos.htm), has been published in Caries Research (see abstract below).

Fluoride: A Chronology of Fluoridation By Val Valerian Fluoride The International Academy of Oral Medicine and Toxicology has classified Fluoride as an unapproved dental medicament due to its high toxicity. Fluoride was found to be an equivocal carcinogen by the National Cancer Institute Toxicological Program.1 A Chronology of Fluoridation By Val Valerian Material Added on November 3, 1997 (c) 1996,1997 Leading Edge Research Group. Now even TAP WATER isn't safe! In 2011, two people in Louisiana died after using tap water for nasal irrigationAmoeba known as Naegleria fowleri can infect brain and enters through nasal passageOnce infected, organism is 99% fatal By Beth Stebner Published: 12:37 GMT, 24 August 2012 | Updated: 12:37 GMT, 24 August 2012 There could be a deadly killer in your home – the kitchen tap.

Solar Healing Center Process In the year 1962 Mother Mira of Pondicherry Ashram in India suggested to HRM that it was time to bring sungazing to the modern world. HRM then read widely and deeply for thirty long years on the sungazing practices of ancient times, which were once common all over the world with all almost all cultures and religions. Over a three year period of continual and intense experimentation on himself, he successfully established a safe sungazing practice which he is now preaching and teaching to humanity in dozens of countries worldwide.

Pineal Gland The pineal gland, also known as the pineal body, conarium or epiphysis cerebri, is a small endocrine gland in the vertebrate brain. It produces melatonin, a serotonin derived hormone, which affects the modulation of sleep patterns in both seasonal and circadian rhythms.[1][2] Its shape resembles a tiny pine cone (hence its name), and it is located in the epithalamus, near the center of the brain, between the two hemispheres, tucked in a groove where the two halves of the thalamus join. Nearly all vertebrate species possess a pineal gland. The gland has been compared to the photoreceptive, so-called third parietal eye present in the epithalamus of some animal species, which is also called the pineal eye.

fluoride removal: diatom, iodine and hydrogen peroxide supplements explained » The Abrahadabra Institute “ A lifetime to build up” “Only days to remove” Please Keep that above statement in mind as we go down the “Fluoride” path together Because it can (and does) get weird and gross at every turn Removing Chloramines We offer free tech support by phone if you have a problem in installation or service. Chloramine, which consists of a mixture of chlorine and ammonia, is added to the water of many cities as a substitute for free chlorine. It is often referred to in the plural, as “chloramines,” because it can take on a number of forms according to the pH and mineral content of the water. The whole reduction discussion for chloramines can become quite complex, but the main thing you need to know is that chloramine is removed from water with essentially the same strategies that are used to remove chlorine. This means that carbon filtration is the best removal method, and, contrary to urban legends, filter carbon does indeed remove chloramine. The problem is that it takes more carbon and more contact time to do the job.

Tulsi Plant (Holy Basil) Found to Remove Fluoride from Water A plant called Tulsi, or Holy Basil, which grows all over India might just be another answer to defluoridating water in poor countries all over the world. Research scientists at Rajasthan University have discovered that Tulsi can replace some of the more expensive alternatives to fluoride removal. The process is so simple, its downright exciting. How do you remove chloramines from tap water? Question: How do you remove chloramines from tap water? Answer: There are three methods that are most commonly used to remove chloramines from tap water. 1) The easiest and least expensive way is to use of a chemical dechlorinating product, but choose one carefully, because not all tap water conditioners or dechlorinators are the same. Read product labels closely, and if a product states that it removes chlorine and chloramines, but has no mention of ammonia, beware.

Colors and Color Healing Everything is made up of electromagnetic energy vibrating at different frequencies that correspond to sound, light and color. We are drawn to the colors needed to create balance in our lives, the goal in all healing. Colors attract ... certain clothing and accessories, colors in our homes, and even the foods we eat. Colors are frequency wavelengths that we conect with based on grid (matrix) attraction. Primary colors following a spectrum called ROYGBIV or the rainbow spectrum. Colors and Frequenices