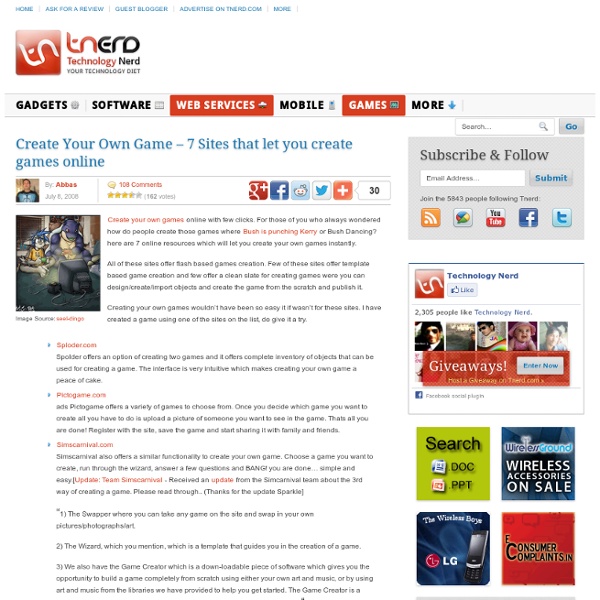 By: Abbas+ July 8, 2008 Create your own games online with few clicks. For those of you who always wondered how do people create those games where Bush is punching Kerry or Bush Dancing? here are 7 online resources which will let you create your own games instantly. All of these sites offer flash based games creation. Creating your own games wouldn’t have been so easy it if wasn’t for these sites. Sploder.com Spolder offers an option of creating two games and it offers complete inventory of objects that can be used for creating a game.

Free-eBooks.net | Download free Fiction, Health, Romance and many more ebooks - Iceweasel Gamestar Mechanic The Scrolling Game Development Kit Homepage Free Books : Download & Streaming : Ebook and Texts Archive : Internet Archive - Iceweasel Additional collections of scanned books, articles, and other texts (usually organized by topic) are presented here. The American Libraries collection includes material contributed from across the United States. Institutions range from the Library of Congress to many local public libraries. As a whole, this collection of material brings holdings that cover many facets of American life and scholarship into the public domain. Significant portions of this collection have been generously sponsored by Microsoft , Yahoo! , The Sloan Foundation , and others. United States Patent and Trademark Office documents contributed by Think Computer Foundation. This library of books, audio, video, and other materials from and about India is curated and maintained by Public Resource. Uploads from the general users of ARCHIVE.ORG related to Islamic culture, studies and related subjects. Free books for the&nbsp; people with disabilities that impact reading. Books contributed by the Internet Archive.

The Pedagogy of Play and the Role of Technology in Learning The goal of the videogame “Civilization” is to build a civilization that stands the test of time. You start the game in 4000 B.C. as a settler and, with successful gameplay, can create a civilization that lasts until the Space Age. Throughout the game, you need to manage your civilization’s military, science, technology, commerce and culture. One doesn’t read “The Decline and Fall of the Roman Empire” to develop strategy before playing the game. One starts by playing. This is true for all videogames. This model of learning is not only effective for videogames but for all digital tools, and I would argue that play — especially in the digital sense — is emerging as a pedagogical keystone for education in the 21st century. Stuart Brown, M.D., explains in his book, “Play,” how a range of scientific disciplines have revealed the importance of lifelong play. The power of play The iPad has been hyped as a device that will revolutionize education. Creating a ‘sandbox’ Joichi Ito Related

Free Kid-Friendly Avatar Creators This seemed to be the most popular site that was sent to me. It is hosted by the Wildlife Conservation Society and the New York Zoos and Aquarium. Students can choose their gender, their skin tone, and add eyes, hands, feet and 'backsides' that are all animal parts. To use this as an avatar, students would have to click 'I'm Done' and then save the image to their desktop to use. It is free and does not require a login account. This site allows you to create a personalized avatar for free. that looks like a superhero. Reasonably Clever Lego Avatar You can use this site to create a Lego avatar. The Simpsons Movie Avatar Creator I'm not sure if my district blocks this site, but it's an obvious winner with kids! alpoy.com This site allows a user to upload a photo from their computer and add lines, shapes, color and text to it. You can then get a link to the image and an embed code. This site, though written in another language (Portuguese?) Ruth Cohenson (@tearoof)

8 Ways Anyone Can Learn To Code Their Own Software There’s a lot of talk about hardware, devices, and tools for the classroom. But if we learned anything from yesterday’s WWDC Apple keynote, it’s that software is king. It’s what makes or breaks a new product or device. Gone are the days of hardware-first, software-second such as when phones with color screens were viewed as revolutionary. Those days are gone. Get Your Code On So instead of sitting back and waiting for Apple or Google to churn out the software we want, why not learn how to build it yourself? So whether you think you don’t need to learn how to code or just want to dip your toes into the pool, read on. Below are just a few of an increasingly crowded marketplace. Patience Is A Virtue Important note: coding takes time. W3Schools Skill Level: Beginner If you’re new to coding (I’m talking about ‘no idea what code is’ kinda new) then this is THE place for you. In my experience, W3Schools has some of the best-organized guides to using the popular coding languages of today. Codecademy

MooT is the etymology, semantics, and grammar game Enter the National STEM Video Game Challenge Tagged with: high schoolMiddle SchoolSTEM The National STEM Video Game Challenge, launched in 2010, aims to motivate interest in STEM learning among America’s youth by tapping into students’ natural passion for playing and making video games. Organizers have set up a special Edmodo Community for educators to join and to help you get your students involved. Join the community and connect with the event’s organizers as well as other teachers who are mentoring students in the competition. Check out 2012 winners & games The Challenge Middle and high school students across the country are challenged to create original video games, individually or as teams, and to submit their games for the opportunity to win important recognition for themselves and their communities. Credits The National STEM Video Game Challenge is presented by the Joan Ganz Cooney Center at Sesame Workshop and E-Line Media.

Official Mind Mapping software by Tony Buzan Adapt Your Gamification Designs with Jesse Schell’s Four Pillars Adapt and Evolve Your Gamification Through Jesse Schell’s Four Pillars of Design Jesse Schell describes in his brilliant book The Art of Game Design the four pillars that is comprised of a game: Technology, Aesthetics, Mechanics, and Story/Narrative. When gamifying a process it is smart not to overlook any of the pillars. After all, we’re now in the experience economy and Gamification might be your killer app when enhancing customer or employee engagement: A major difference with designing a game and gamifying a process is that a game designer tends to start from scratch. A great metaphor for this need of thinkering can be seen in the movie Apollo 13: Consider how you might adapt and gamification system to your needs by approaching it through Schell’s four pillars of game design. Game Mechanics: Similarly to the need of different managerial approaches, I believe different Gamification styles for opened and closed systems must be applied. Aesthetics: Technology: Story/Narrative: