Make Your Own Game! 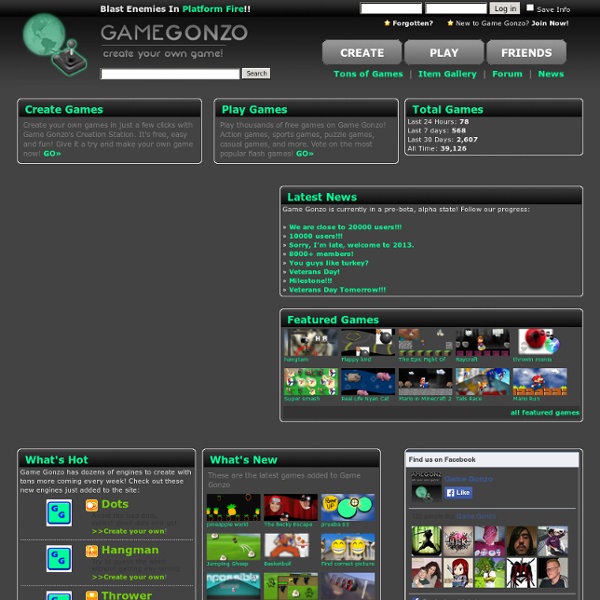 Create Your Own Game – 7 Sites that let you create games online By: Abbas+ July 8, 2008 Create your own games online with few clicks. For those of you who always wondered how do people create those games where Bush is punching Kerry or Bush Dancing? here are 7 online resources which will let you create your own games instantly. All of these sites offer flash based games creation. Chris Albeluhn - UT3 / UDK Physics Tutorial Number 1 This tutorial will go through a simple setup for a physics asset which can be done in both UT3 and UDK. This particular one will be an old medieval street light dangling from a rope which is attached to a wooden support. This will focus only on the rigging and physics construction side of the asset. First we need a model. We need only 4 joints to make this all work.

Resources « Stevie's corner Welcome to my UT3 resources page :D This section consist of links to help a mapper start to build a level. Also, there are links to help you optimize your level, others that provide very useful information & others that are related to a specific topic. Something I want to point out is Odedge site. This friend of mine as build a complete list of level editing links for all the steps while your building a level.

Tutorials Unreal Engine 4 Unreal Engine 4 tips: A couple of random all purpose UE4 tips. Performance tips most notably. The Solus Project: Several videos and presentations on the making of the UE4 title Solus, along with the free Solus example files. Adding Characters To UDK tutorial - Unreal Development Kit Game Engine i.e. Enemies and Players dont have the same model, a intermediate tutorial with a video to acompany it as per a request (video does not have a commentary cus i dont have a mic and i cant be arsed to go to the shops and buy one) To fulfill a request for a written version of this, here is a written version of this :P First Of All: I used Uncodex and Notepad ++, if you use a different piece of software thats fine as long as you know how to do the same things that i do. Now Open Up UDK but minimise it (DONT CLOSE IT,or youll be stuck later)

Balance, Part 3: Systems, Defaults and Munchkins « Tish Tosh Tesh Balance Part 1: Tao of Picasso Balance Part 2: Asymmetry and Art …and now for something a little more concrete. I’m taking a look at the backbone of character progression in a game I’m designing and digging a little into why I’m making my choices and how I’m incorporating “balance” within the game, specifically how it relates to pacing and balancing player abilities against the game’s design. (I’ll handle other balancing aspects of the systems in another article.) Let’s call it a practical theoretical exercise, since I’m not sure this game will ever actually be created much less published, but I’m designing it as if it were something I’m happy enough to put out there as a finished game.

101 Game Design Principles for Social Media Game design principles are often incorporated into social media (gamification). The reason is that games are downright addictive. Game-like features can increase user engagement — encouraging desired behaviour from customers, partners and employees. Game design is a well developed field. After all, games have been around for thousands of years. Balance, Part 2: Asymmetry and Art « Tish Tosh Tesh Continued from Part 1, of course… The left and right sides of this diagram are balanced. The left and right sides of this diagram are also balanced. These, too. Balance, Part 1: Tao of Picasso « Tish Tosh Tesh If perfect balance is accurately represented by the Taoist notion of Yin and Yang (ignoring three-faction design, Rock-Paper-Scissors and pretty much any class or skill based system)… Next time, more pictures, Street Fighter, Druids and *gasp*… Color! Edited to add the following, to be a bit more informative. As I noted over at BBB’s place, brevity is overrated, and this really does deserve a bit more:

Rewards and Reward Schedules in Gamification - Andrzej's Blog Anyone who has read a few of my blogs will, by now, be under the impression that I am not the biggest fan of rewards. Well, that is not entirely how I feel. Those that have read earlier blogs may remember something I said – “Rewards should recognise achievement, not be the achievement”. I also found myself saying in an email “Gamification at the moment is often nothing more than an attempt to illicit Pavlovian responses to external stimuli”.

9 Tips for Indie Game Developers I Learned at GDC 2013 - Tuts+ When I attended GDC 2013 I spent most of my time at the Independent Game Developers Summit where I got to hear many successful indie developers talk about how their projects succeeded and how they've stayed in business through both success and failure. In this article I'll go over the tips I found most useful, and the ones I believe will help you be the best developer you can be. Whenever possible, reuse existing elements, rather than creating new ones.Andy Hull In Hull's mini-talk, he discussed the work he did on the indie game Spelunky when it was being brought to the Xbox 360, and how his experience as a wooden toy designer helped him.

Game Design, Psychology, Flow, and Mastery - Articles - Fail-safes in Competitive Game Design: A Detailed Example I'd like to take an in-depth look at an example of designing balance into a game through the use of fail-safes. Although I'm choosing a fighting game, the lessons should apply to many types of games. I'll go into some excruciating, genre-heavy details, but I think that's necessary to give the full force of what's really going on here. Welcome to MvC2, don't even ask.Some games end up balanced through sheer coincidence, such as the fighting game Marvel vs. Capcom 2, which is "accidentally a very good game."

Related:
Related:  How deep is your love/How bad are ur jokes?   -  iDontWantToWork.com   -  BYOND - Make & Play Online Multiplayer Games   -  Create Your Own Game – 7 Sites that let you create games online   -  Emotional Freedom Technique (EFT) - Emotional Health   -  Doubling Your Brain Power (Part 1 of 4) - YouTube   -  8 Brocades of Qigong - YouTube   -  14 Ways to Cleanse the Body from Chemtrails, GMOS, Flouridated Water, and other Environmental Toxins | TruthTheory   -  How to Clean Your Liver with 5 Natural Liver-Cleansing Tips   -  Brains flush toxic waste in sleep, including Alzheimer’s-linked protein, study of mice finds - The Washington Post   -  How to Undo the Damage of Sitting - 7 Simple Exercises