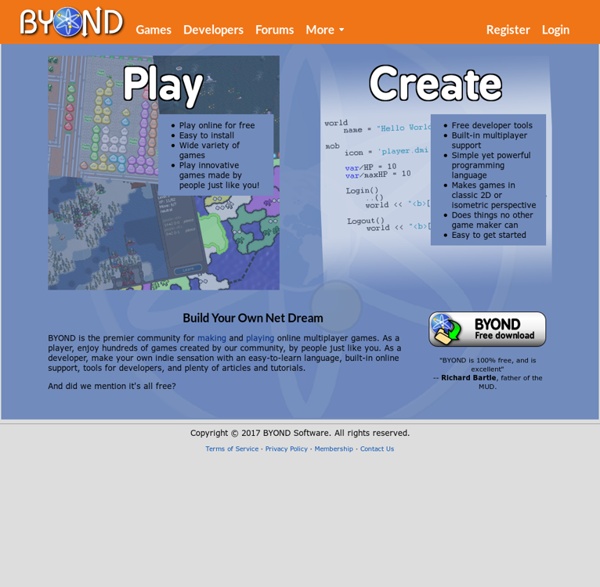 Create Your Own Game – 7 Sites that let you create games online By: Abbas+ July 8, 2008 Create your own games online with few clicks. For those of you who always wondered how do people create those games where Bush is punching Kerry or Bush Dancing? All of these sites offer flash based games creation. Creating your own games wouldn’t have been so easy it if wasn’t for these sites. Sploder.com Spolder offers an option of creating two games and it offers complete inventory of objects that can be used for creating a game.

The Scrolling Game Development Kit Homepage Free Kid-Friendly Avatar Creators This seemed to be the most popular site that was sent to me. It is hosted by the Wildlife Conservation Society and the New York Zoos and Aquarium. Students can choose their gender, their skin tone, and add eyes, hands, feet and 'backsides' that are all animal parts. To use this as an avatar, students would have to click 'I'm Done' and then save the image to their desktop to use. This site allows you to create a personalized avatar for free. that looks like a superhero. Reasonably Clever Lego Avatar You can use this site to create a Lego avatar. The Simpsons Movie Avatar Creator I'm not sure if my district blocks this site, but it's an obvious winner with kids! alpoy.com This site allows a user to upload a photo from their computer and add lines, shapes, color and text to it. You can then get a link to the image and an embed code. This site, though written in another language (Portuguese?) You could also use Dumpr.net to create an image for an avatar. Ruth Cohenson (@tearoof)

Enter the National STEM Video Game Challenge Tagged with: high schoolMiddle SchoolSTEM The National STEM Video Game Challenge, launched in 2010, aims to motivate interest in STEM learning among America’s youth by tapping into students’ natural passion for playing and making video games. Organizers have set up a special Edmodo Community for educators to join and to help you get your students involved. Join the community and connect with the event’s organizers as well as other teachers who are mentoring students in the competition. Check out 2012 winners & games The Challenge Middle and high school students across the country are challenged to create original video games, individually or as teams, and to submit their games for the opportunity to win important recognition for themselves and their communities. Credits The National STEM Video Game Challenge is presented by the Joan Ganz Cooney Center at Sesame Workshop and E-Line Media.

5 Free Game Development Software Tools To Make Your Own Games Advertisement Do you have an idea for a game that’s been brewing in your mind for years? What if I told you that you could make that idea come to life, even if you have no game development experience? These days, anyone can make a video game with a bit of elbow grease and perseverance. Of course, that doesn’t mean game development is easy. Note that this list is ordered by least complex to most complex. 1. No programming needed. Create once, publish everywhere. Lots of documentation. Asset Store. Pricing. Download — Construct 2 2. Drag-and-drop OR code. Create once, publish everywhere. Long history. Built-in advanced features. Pricing. Download — Game Maker: Studio 3. Supports 2D and 3D. Component-based design. Widespread usage and documentation. If you’re interested in the coding aspect, we recommend checking out our introduction to Unity. Create once, publish everywhere. Asset store. Pricing. Download — Unity 4. Supports 2D and 3D. Scene-based design. Custom scripting language. 5.

DungeonDefenseDeveloperBlog Search public documentation: DungeonDefenseDeveloperBlog 日本語訳中国翻译한국어 Interested in the Unreal Engine? Looking for jobs and company info? Questions about support via UDN? Blog 1: Day One Hey all, These are some exciting times for indie developers. As a long-time Unreal developer, I’ve jumped on this bandwagon, and over the coming months I’m going to be putting together a series of straightforward mini-game demos on the UDK. So without further ado, let’s chow down! When thinking about what kind of game to start with, I noticed that some people seem to be wondering about creating various kinds of third-person games with Unreal, which is an easy thing to do once you know how. Therefore, the first mini-game that I’m going to tackle will be called “Dungeon Defense”, and it will be a semi-topdown (more like ¾ perspective) action/tower-defense hybrid. So over the weekend, I did some design work to plan out my assets and control schemes, and then today I officially started programming. - Jeremy

Chris Albeluhn - UT3 / UDK Physics Tutorial Number 1 This tutorial will go through a simple setup for a physics asset which can be done in both UT3 and UDK. This particular one will be an old medieval street light dangling from a rope which is attached to a wooden support. This will focus only on the rigging and physics construction side of the asset. First we need a model. We need only 4 joints to make this all work. To export these assets, you will need 'Actor X'. the link can be found below. Importing the assets is the same as importing anything else. You will notice that when the 'lamp' is imported, it seems to be transparent. It will then come up with a window giving you different options for your new mesh. The 'UnrealPhaT' window should appear, if it doesn't simply double click on the newly created physics asset. To get a better grasp on this window and all the functions, take a look at Epics forum site located here. 1. Enjoy

Resources « Stevie's corner Welcome to my UT3 resources page :D This section consist of links to help a mapper start to build a level. Also, there are links to help you optimize your level, others that provide very useful information & others that are related to a specific topic. I’ll appreciate you let me know if any link is broken or invalid so I can fix it. Learning Unreal Engine 3 Editor from scratch & essential info 3D Buzz UE3 tutorials (This is a single video pack that combines all 3D Buzz videos on Fileplanet and has several hours of tutorials, a must ! Waylon BrinckHourencesThe complete static SM catalogUnreal Developer Network (UDN) General level design tips and highly recommended tutorials Chris Albeluhn’sChris HatchieIsaac Sukin aka IceCreamYouOliver aka mAlkAv! Odedge extensive UT3 tutorials listOdedge Blender tutorials listOdedge GIMP tutorials list More specific “how to do” things 3D Buzz (Check the Unreal main menu)Passion3D (French)Stevelois (Various tuts made by me on specific things) Kismet Optimization

Tutorials Unreal Engine 4 Unreal Engine 4 tips: A couple of random all purpose UE4 tips. Performance tips most notably. The Solus Project: Several videos and presentations on the making of the UE4 title Solus, along with the free Solus example files. Unreal Engine 3 (UT3/UDK/Other) Note these tutorials have been written with various versions of the engine. UE3 FAQ: Frequently asked questions regarding UE3. Design/Art Tutorials – Universal/Any Game Texture Tutorial: Things to keep in mind when texturing a level.

Adding Characters To UDK tutorial - Unreal Development Kit Game Engine i.e. Enemies and Players dont have the same model, a intermediate tutorial with a video to acompany it as per a request (video does not have a commentary cus i dont have a mic and i cant be arsed to go to the shops and buy one) To fulfill a request for a written version of this, here is a written version of this :P First Of All: I used Uncodex and Notepad ++, if you use a different piece of software thats fine as long as you know how to do the same things that i do. Now Open Up UDK but minimise it (DONT CLOSE IT,or youll be stuck later) So step One i guess: Open up uncodex, make sure your tree is nice and up to date, then look for a class called UTFamilyInfo. Step Two? Step Three. Now Go into your Unreal Frontend and recompile, this is where i make a mistake in the video because i had a spelling mistake :P oops Recompile and then all that testing i promised :P

Art game thoughts re Chain World At GDC, there was a Game Design Challenge (I’ve participated in one of these, in the distant past!). This year the topic was religion. And you’re going to need to know everything about what happened to make sense of this post. Jason Rohrer won the challenge, with a game that was a Minecraft mod with very particular rules. The big rule to know about is that it’s a game played sequentially, with the world having persistence, so that each player gets to see the remnants of what the previous player left behind, but with no explanation. A video of the entire challenge: Game Design Challenge 2011 on YouTube Side note: I actually received a “miracle” during this process, and then it was taken from me for the purposes of keeping score, something which I felt was rather gamificationy. In any case, since then, Chain World, the winning idea, has morphed a bit, with the privilege of playing the mod next going to a bidder for charity. Fighting words! Needless to say these are points on a spectrum.