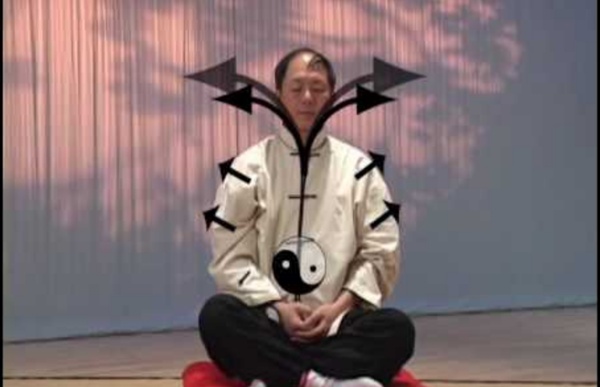 Two Keys for Regulating Your Breathing and Circulating Qi | YMAA Website The keys to regulating the breathing and transporting Qi (energy) are in two places: the Huiyin cavity located between the genitals and anus, and the palate of the mouth. The Huiyin cavity is the connecting point of the four Yin Qi vessels and is the controlling and releasing gate for the four Yin Qi reservoirs. When the Huiyin is pushed out, the Qi in the Yin vessels is released and when the Huiyin is lifted upward, the Qi in the Yin vessels is contained and condensed. For example, when you laugh out loud, your exhalation is longer than your inhalation, and when you exhale, the Huiyin is pushed out naturally, the entire body’s Yang is manifested and the Guardian Qi is strengthened; consequently, the body gets warmer and begins to sweat. Conversely, when you are sad and depressed, the inhalation is longer than the exhalation and when you inhale, the Huiyin is lifted upward naturally, the Marrow Qi is increased and the Guardian Qi is condensed inward, hence the body feels cooler.

DIY: Sharpie Tie Dye This is a great project for kids, or adults. I first saw the idea on the blog found here. All you need are some Sharpies, rubbing alcohol and something to drip it from (I had a syringe), and a t-shirt, or other clothing. I put a piece of cardboard in my tank top to prevent bleeding. Step 1: Use the Sharpies to make marks on your t-shirt. Step 2: Drip some drops of rubbing alcohol. Watch your design expand Step 3: Dry your t-shirt completely before washing. After I washed it the colors faded, but I still like the look: TIP: After drying the shirt with a hair dryer, allow it to set for 24 hours before washing.

Baduanjin qigong The Baduanjin qigong(八段錦) is one of the most common forms of Chinese qigong used as exercise.[1] Variously translated as Eight Pieces of Brocade, Eight-Section Brocade, Eight Silken Movements and others, the name of the form generally refers to how the eight individual movements of the form characterize and impart a silken quality (like that of a piece of brocade) to the body and its energy. The Baduanjin is primarily designated as a form of medical qigong, meant to improve health.[2] This is in contrast to religious or martial forms of qigong. However, this categorization does not preclude the form's use by martial artists as a supplementary exercise, and this practice is frequent.[2] History[edit] This exercise is mentioned in several encyclopedias originating from the Song Dynasty. Nineteenth century sources attribute the style to semi-legendary Chinese folk hero General Yue Fei,[4] and describe it as being created as a form of exercise for his soldiers. The sections[edit]

The Science Of Auras & Energy Kirlian photography is an amazing technique for creating print photographs that essentially show an objects aura! The discoverer of this technique, Seymond Kirlian was a Russian electrician and maintenance man at his local hospital. In 1939 he constructed an unusual device that places a sheet photographic film on top of a metal discharge plate that uses high voltage to create an exposure of an image. The first thing he photographed was his own hand! He tried this experiment on many different objects, and what he found was ASTOUNDING! He started to experiment on a freshly picked leaf. When he measured the same leaf a few days later, the aura had a much dimmer aura, but it still glowed. The energy emitting from the plant would lessen as the days went on. If that’s not the most amazing part: If you cut off the tip of a leaf right before it was experimented on, there was still an energy outline of it being there! If they were in good health, the brightness was sharp and more visible.

Flashcards: The world's largest online library of printable flash cards Qigong Energy & Magnets Five Ways to Overcome the Energy of Fear Image credit: freeimages.com/photo/1092344 Learning how to face your fears so that you can gather enough courage to face them is one of the first steps to overcoming the energy of fear. Another very important step is to comprehend what fear is. If you don’t take the time to learn what fear is, you will have a very hard time overcoming your fears. What is fear? Fear is the strongest thought form in the negative polarity. Fear is a powerful emotional energy that bubbles up when we perceive a situation to be threatening in some way, such as when we think something terrible, dangerous, or frightening to us. In nature, scientists call this phenomenon “fight or flight.” Even though the energy of fear can help us evolve, too much of it can prevent us from understand others and nature. Five ways to overcome your fears and keep them in check 1. We have all heard the old adage to “face your fears,” but there is actually a lot of wisdom in this piece of advice. 2. 3. 4. 5. Sources:

The Grigori The Watchers The Lord spoke: "Have no fear, Enoch, good man and scribe of goodness. Come hear my voice. Go speak to the Watchers of Heaven, who have sent you to intercede for them. Tell them, You should intercede for men, and not men for you. (1 Enoch) In the early days after the Fall, before the demons had escaped from Hell and before the War had begun in earnest, the Seraphim Council debated long and long about how best to safeguard humanity. Seemingly in answer, God created the Grigori, the Eight Choir. The Grigori were truly the most "human" of angels. The Grigori were also the only angels who really felt comfortable on Earth, and who didn't mind staying there. It made them very, very effective at their jobs. The "Second Fall" In 11,600 B.C., it came to the attention of Heaven that the Grigori had become entirely too human; they had taken wives, started families, and some were even succumbing to debauchery, immersing themselves in corporeal pleasures. The Grigori Today Resonance David

The Twelve Primary Qi Channels - Part 1 Here will briefly review the twelve primary Qi channels along with the eight extraordinary meridians. You should also know the organ's Yin and Yang. In our body, there are six Yang organs and six Yin organs. In the limbs, the Yang channels are on the external side of the limbs while the Yin channels are on the internal side. The organs are further subdivided in order to distinguish the different levels of the Yin/Yang characteristics. Lung Channel of Hand Greater Yin The lungs (Yin) and the large intestine (Yang) are considered paired organs. In Qigong practice, since the lungs belong to Metal, they are able to regulate heartburn. Breathing is considered a strategy for leading Qi to the extremities such as skin and hair. The lungs are sensitive to emotional changes, especially when you are sad or angry. Because the lungs are usually the first to be attacked by exogenous diseases, they are called the Delicate Organ. Large Intestine Channel of Hand - Yang Brightness End of Part 1