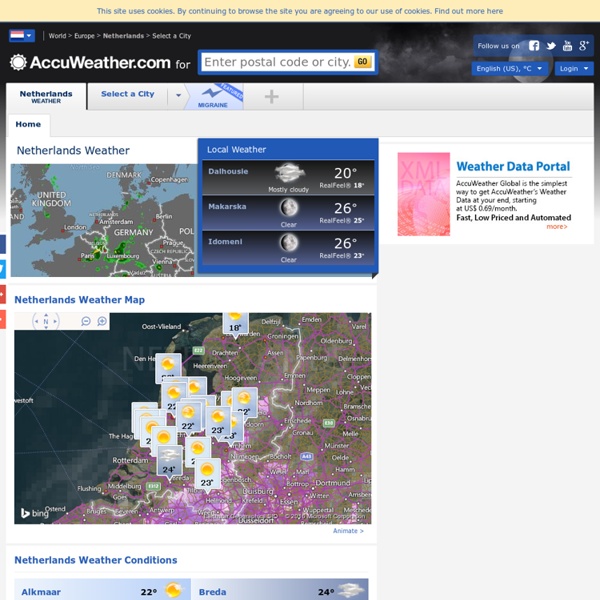 Globaler Wetterbericht - Ihre örtliche Vorhersage Select interests to add to your dock Health Cold & FluAllergiesRespiratoryArthritisMigraineSinus TravelAstronomyEvents A.M. Acceleration of snow melt in an Antarctic Peninsula ice core during the twentieth century : Nature Geoscience Over the past 50 years, warming of the Antarctic Peninsula has been accompanied by accelerating glacier mass loss and the retreat and collapse of ice shelves. A key driver of ice loss is summer melting; however, it is not usually possible to specifically reconstruct the summer conditions that are critical for determining ice melt in Antarctic. Here we reconstruct changes in ice-melt intensity and mean temperature on the northern Antarctic Peninsula since AD 1000 based on the identification of visible melt layers in the James Ross Island ice core and local mean annual temperature estimates from the deuterium content of the ice.

Simple, easy to use touchscreen computers for seniors “Over the years I've looked at several computers which were "senior friendly". In the past, they all pretty much were shells over Windows, which essentially added another layer of code that could go wrong. This computer is Linux-based, and everything is coded from the ground up for senior use.

Comet ISON Meteor Shower Comet ISON Meteor Shower April 19, 2013: Anticipation is building as Comet ISON plunges into the inner solar system for a close encounter with the sun in November 2013. Blasted at point-blank range by solar radiation, the sungrazer will likely become one of the finest comets in many years. NESDIS Education & Outreach Vegetation Health Though most of the Earth is covered by water, 25 percent of the planet’s surface is a dynamic green. NOAA scientists use satellite observations of vegetation greenness to develop vegetation health products that can be used as proxy data for monitoring drought, soil saturation, moisture and thermal conditions, fire risk, greenness of vegetation cover, vegetation fraction, leaf area index, start and end of the growing season, crop and pasture productivity, El Niño-Southern Oscillation climate anomalies, desertification, mosquito-borne diseases, invasive species, ecological resources, land degradation and more. Use the slider to follow a weekly “greenup” for 2007.

Antarctic ice melting 10 times faster than 600 years ago Updated Mon 15 Apr 2013, 11:10am AEST A report has found that the Antarctic summer ice melt is now occurring 10 times faster than it did 600 years ago. Scientists from the British Antarctic Survey and the Australian National University drilled a 360-metre ice core near the northern tip of the peninsula to to identify past temperatures. The ice core gave an extraordinary insight into the temperatures, revealing the coolest conditions, and the lowest melt, occurred six centuries ago. By comparison, it found temperatures now are 1.6 degrees Celsius higher, and the ice melt is 10 times as fast. 1 Corinthians 1:10 New International Version 1Paul, called to be an apostle of Christ Jesus by the will of God, and our brother Sosthenes, 2To the church of God in Corinth, to those sanctified in Christ Jesus and called to be his holy people, together with all those everywhere who call on the name of our Lord Jesus Christ—their Lord and ours: 3Grace and peace to you from God our Father and the Lord Jesus Christ. Thanksgiving

Arctic Sea Ice News and Analysis The year 2019 saw an early melt onset and high sea surface temperatures during summer in the Beaufort and Chukchi Seas. The September minimum extent ended up tied with 2007 and 2016 for second lowest in the satellite record. Autumn freeze up was slow. In December, the Chukchi Sea finally completely refroze, Hudson Bay iced over, and sea ice extended south into the Bering Sea. The year 2019 still ended up with low extent in the Bering Sea. Ryan Maue PhD Meteorology Post by Dr. Ryan N. Maue Dr. Judith Curry is quoted in a classic Seth Borenstein AP screed connecting disparate extreme weather events into a tidy AGW-narrative: “Sometimes it seems as if we have weather amnesia.” How to Forecast Weather Ever wondered how to forecast the weather without actually using instruments? Check the Clouds: Clouds can tell us a lot about the weather. For example, they can tell us if it’s going to be warmer on a particular night by simply being there. That’s because they prevent heat radiation from escaping.

WDSS-II: CONUS Multi-Radar Disclaimer: Images on these pages are experimental. Real-time access to these images may not be available at all times (due to data outages, network problems, availability of resources, or at the discretion of the publisher). Use at your own risk. Data are experimental and may expirence any number of problems including being late or not being available at all. MODIS Today MODIS Today: USA Composite - April 24, 2014 (114) Today's Terra Passes Open in Google Earth System Status Download this image (Click on the image below to zoom in) GIS Files