Course/Subject Page - Chemical, Forensic, Food & Environmental Technology. Environmental Effects of Air Pollutants When developing standards for the assessment of air pollution the emphasis has always been on controlling the effects on human beings, with all other effects being treated as of much lesser importance. 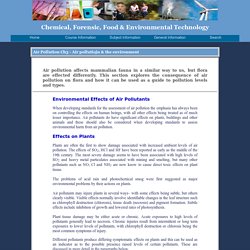 Air pollutants do have significant effects on plants, buildings and other animals and these should also be considered when developing standards to assess environmental harm from air pollution.Effects on Plants Plants are often the first to show damage associated with increased ambient levels of air pollution. The effects of SO2, HCl and HF have been reported as early as the middle of the 19th century. The most severe damage seems to have been associated with high levels of SO2 and heavy metal particulates associated with mining and smelting, but many other pollutants such as NO, Cl and NH3 are now know to cause direct toxic effects on plant tissue.

Sulfur Dioxide Figure 3.4 – Tissue injury symptoms associated with exposure to high levels of SO2. Polluted Rain - Google Books. Environment of Earth. The natural rainwater moving through atmosphere comes in contact with various chemicals produced and deposited in the atmosphere. 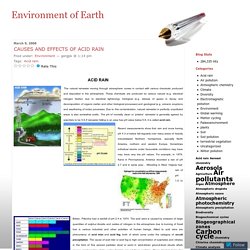 These chemicals are produced by various natural (e.g. electrical nitrogen fixation due to electrical lightening), biological (e.g. release of gases in decay and decomposition of organic matter and other biological processes) and geological (e.g. volcanic eruptions and weathering of rocks) processes. Due to this contamination, natural rainwater in perfectly unpolluted areas is also somewhat acidic. The pH of normally clean or ‘pristine’ rainwater is generally agreed by scientists to be 5.6.If rainwater falling in an area has pH value below 5.6, it is called acid rain. Recent measurements show that rain and snow having pH 4.3 or below fall regularly over many areas of heavily industrialized Northern hemisphere, specially North America, northern and western Europe. Sometimes individual storms under favourable conditions may have may have very low pH values. 02 Johnson. Influence of Simulated Acid Rain on Population Dynamics of Carmine Spider Mite, Tetranychus Cinnabarinus (Boisduval) (Acari: Tetranychidae) and its Host Plant.

How to Control Spider Mites Organically. Description Many species of the spider mite (family: Tetranychidae), so common in North America, attack both indoor and outdoor plants. 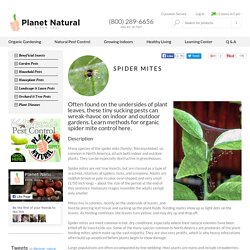 They can be especially destructive in greenhouses. Spider mites are not true insects, but are classed as a type of arachnid, relatives of spiders, ticks, and scorpions. Adults are reddish brown or pale in color, oval-shaped, and very small (1/50 inch long) – about the size of the period at the end of this sentence. Immature stages resemble the adults except only smaller. Mites live in colonies, mostly on the underside of leaves, and feed by piercing leaf tissue and sucking up the plant fluids. Spider mites are most common in hot, dry conditions, especially where their natural enemies have been killed off by insecticide use. Large populations are often accompanied by fine webbing. Life Cycle Most mite species overwinter as eggs on the leaves and bark of host plants. 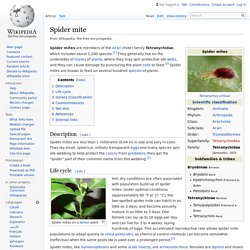 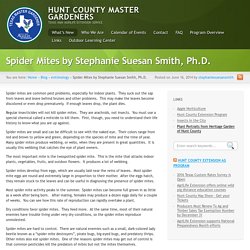 They suck out the sap from leaves and leave behind bruises and other problems. This may make the leaves become discolored or even drop prematurely. If enough leaves drop, the plant dies. Explore Cornell - Home Gardening - Vegetable Growing Guides - Growing Guide. Garlic prefers cool weather when developing foliage, and warm weather when bulbs enlarge. 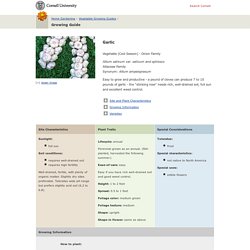 Fall plantings take about 8 months to mature.Choose a weed-free, well-drained location. Raised beds are ideal. Do not plant where other onion family crops have been grown in the past 3 years.In New York, plant from about the time of first fall frost to early November. If your soil is loose and well-prepared, you can plant in very early spring, but fall plantings usually yield more.Using cloves from the supermarket is not recommended. Explore Cornell - Home Gardening - Flower Growing Guides - Growing Guide. Diluting acetic acid to obtain a solution of pH 5 - Chemistry Stack Exchange. How to calculate the amount needed for a pH solution? The math and chemistry get fairly sophisticated since vinegar is a weak acid, but I'll try to boil it down as much as possible. 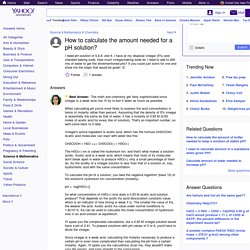 When calculating pH you're more likely to express the acid concentration in terms of molarity rather than percent. Assuming that the density of 5% vinegar is essentially the same as that of water, it has a molarity of 0.83 M (0.83 moles of acetic acid for every liter of solution). That's an important number, so we'll come back to it later. Vinegar's active ingredient is acetic acid, which has the formula CH3COOH. Acetic acid molecules can react with water like this: The H3O(+) ion is called the hydronium ion, and that's what makes a solution acidic.

To calculate the pH of a solution, you take the negative logarithm (base 10) of the solution's hydronium ion concentration (molarity). Allium sativum (cultivated garlic): Go Botany. Garlic - Allium sativum. Garlic. Garlic (scientific name Allium sativum) is a species in the onion genus, Allium. 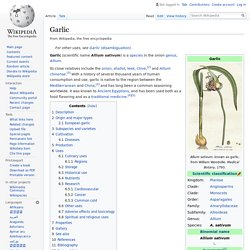 Its close relatives include the onion, shallot, leek, chive,[2] and Allium chinense.[3] With a history of several thousand years of human consumption and use, garlic is native to the region between the Mediterranean and China,[2] and has long been a common seasoning worldwide. It was known to Ancient Egyptians, and has been used both as a food flavoring and as a traditional medicine.[4][5] Description[edit]

Marigolds: How to Plant, Grow, and Care for Marigold Flowers. Where to buy marigold seeds and plants: Burpee Gardening No annual is more cheerful or easier to grow than marigolds. 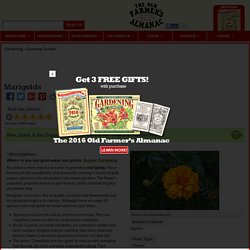 These flowers are the spendthrifts among annuals, showing a wealth of gold, copper, and brass into our summer and autumn gardens. The flower’s popularity probably derives in part from its ability to bloom brightly all summer long. Aztec Marigold - Tagetes erecta. Tagetes erecta. Bud of Tagetes erecta in India Uses[edit] Rituals[edit] Its flower, the cempasúchil is also called the flor de muertos ("flower of the dead") in Mexico and is used in the Día de los Muertos celebration every 2 November. 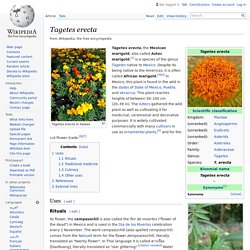 The word cempazúchitl (also spelled cempasúchil) comes from the Nahuatl term for the flower zempoalxochitl, literally translated as "twenty flower". In Thai language it is called ดาวเรือง [DaoRuang], literally translated as "star glittering". Traditional medicine[edit] Tagetes erecta (Aztec marigold): Go Botany. ACID RAIN : CAUSES, EFFECTS, AND SOLUTIONS. "Acid Rain," or more precisely acid precipitation, is the word used to describe rainfall that has a pH level of less than 5.6. This form of air pollution is currently a subject of great controversy because of it's worldwide environmental damages. For the last ten years, this phenomenon has brought destruction to thousands of lakes and streams in the United States, Canada, and parts of Europe. Acid rain.

Final Presentation of The Effect of Acid Rain On Plant Growth. By: Amy, Tya, Susan & JessicaProfessor Hays CumminsWCP 121/123 Section F Click here if the background entertainment doesn't automatically load! Abstract In today's commercialized, fast-paced society, it often seems that the most important things in life are overlooked. Factories and vehicles are producing so much pollution that the government cannot (or does not want to) keep up with the legislation required to stop them. What could be more important in our lives than the environment in which we live? Untitled. "Review of Literature" UW-Madison Writing Center Writer's Handbook. Environmental science projects & experiments. Learn how to prepare award-winning science fair projects. It is important to work safely and to keep good records of your experiments.

See LAB SAFETY AND LAB NOTEBOOKS. Science Project. The Effect of Acid Rain on Marigold Plants Experiment. Objective: The objective was to determine the effect increased acidity in watering solutions would have on the growth, flowers and sprouts, and health of marigold plants so that inferences could be made about the effect acid rain is having on our environment. Limestone and Acid Rain. Carbon Dioxide-Bicarbonate-Carbonate Equilibrium One important buffer in surface waters is the carbon dioxide/bicarbonate/carbonate buffer. Acid Rain and Ground Water pH. The Chemistry of Acid Rain.