Facts on the Rainforest 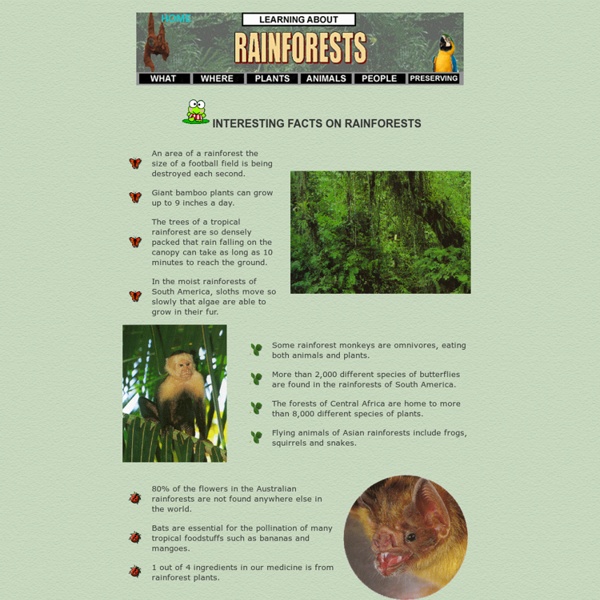 info_8116227_10-interesting-tropical-rainforest-biome At least 80% of the developed world's diet originated in the tropical rainforest. Its gifts to the world include fruits like avocados, coconuts, figs, oranges, lemons, grapefruit, bananas, guavas, pineapples, mangoes and tomatoes. It has also provided vegetables including corn, potatoes, winter squash and yams; spices like black pepper, cayenne, chocolate, cinnamon, cloves, ginger, sugar cane, tumeric, coffee and vanilla and nuts including Brazil nuts and cashews. Rainforest Biomes The tropical rain forest is a forest of tall trees in a region of year-round warmth. An average of 50 to 260 inches (125 to 660 cm.) of rain falls yearly. Rain forests belong to the tropical wet climate group. The temperature in a rain forest rarely gets higher than 93 °F (34 °C) or drops below 68 °F (20 °C); average humidity is between 77 and 88%; rainfall is often more than 100 inches a year. There is usually a brief season of less rain. In monsoonal areas, there is a real dry season.

Cool Trees A giant in the rainforests, the kapok tree can reach up to 200 feet in height, sometimes growing as much as 13 feet per year. Due to its extreme height, the kapok, or ceiba tree, towers over the other rainforest vegetation. The trunk can expand to nine or 10 feet in diameter. Tropical rainforest A tropical rainforest is an ecosystem type that occurs roughly within the latitudes 28 degrees north or south of the equator (in the equatorial zone between the Tropic of Cancer and Tropic of Capricorn). This ecosystem experiences high average temperatures and a significant amount of rainfall. Rainforests can be found in Asia, Australia, Africa, South America, Central America, Mexico and on many of the Pacific, Caribbean, and Indian Ocean islands. Within the World Wildlife Fund's biome classification, tropical rainforests are a type of tropical wet forest (or tropical moist broadleaf forest) and may also be referred to as lowland equatorial evergreen rainforest.[3] Overview

Home 00:00:00:22KATHY MCLEISH, REPORTER:The Simpson Desert is alive with new life, the landscape transformed by an event that's only happened 3 times in 100 years.00:00:09:18ANDREW HARPER:We could come back here every year for the next 30 years and not see it like this. It's fantastic.00:00:17:18KATHY MCLEISH:Floodwaters pouring in from Central Queensland and torrential inland rain have filled waterholes and wetlands. Some of the animals and plants which have come to life are rarely seen in the desert. Scientists are mounting expeditions to try and learn what they can before the water and the new animals and plants disappear again, as they must.00:00:45:08CAMEL:(Bleats and moans)00:00:51:03ANDREW HARPER:This guy's pretty vocal in the morning. That's just his normal 'good morning' noise.00:00:55:01KATHY MCLEISH:Andrew Harper is loading up for a trek on a conservation property called Ethabuka, which covers 213,000 hectares of the desert.00:01:04:16ANDREW HARPER:Doing it for 15 years now.

Tropical Rainforest Plants Tropical rainforest plants grow in more obvious layers than temperate rainforest plants. Like in all tropical rainforests, there are the tall trees, vines and epiphytes, shorter trees and tree ferns, and orchids and other smaller plants on the forest floor. Some more famous examples are the bird of paradise flower, the giant lilys, and the carnivorous pitcher plants. © Poster by AllPosters. Click on thumbnail to buy Africa and Madagascar IslandAfrican rainforests are the second largest in the world after Amazon.

Rainforests Facts Facts about Rainforests Do you know how many tropical rainforest plants have been identified as having anti-cancer properties? Or how many continents around the world contain rainforests? And just how quickly are the world's rainforests disappearing? Find out the answers to these questions and more as you check out these interesting rainforest facts! Cold Tempetures Updated January 11, 2009 A rainforest is a forest differentiated by high levels of precipitation - normally a minimum of at least 68-78 inches (172-198 cm) annually. Rainforests tend to have fairly mild and/or warm climates and feature the highest levels of biodiversity in the world. Additionally, tropical rainforests are considered the "lungs of the Earth" because of the high amount of photosynthesis occurring in them.