Quake. Western U.S., Rainbow Loop: GOES West. Mysterious blue and green lights seen flashing in the sky as Mexico earthquake hits sending UFO hunters into a frenzy. BIZARRE blue and green flashing lights were spotted over Mexico City after it was rocked by a huge earthquake - sparking fears of a UFO invasion. 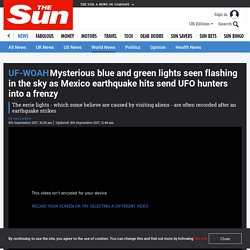 The 8.1 mega-quake was so powerful it triggered a three-metre tsunami and danger warnings for at least eight other countries remain in the region. Twitter/orlaherrera The spooky phenomenon was captured on camera after hundreds of thousands of residents spilled onto the streets following the late night tremors. The eerie lights - which some mistook for UFOs - are often recorded after an earthquake strikes. However, little is actually known about why the occur. The dazzling lights sometimes last for several minutes before or after an earthquake. They come in many colours and have been reported over hundreds of years. One theory is that the lights are caused by a breakdown of oxygen within certain rocks which can then cause ions to travel up through the cracks in the rocks. 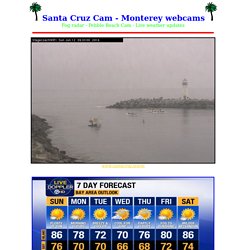 Santa Cruz webcam Nepenthe Restaurant Bay Area FOG Live Monterey Bay Cam Pebble Beach Concours d’Elegance Once each year, on the third Sunday in August, about 200 of the most prized collector cars and motorcycles in the world roll onto what is often called the best finishing hole in golf — the famed eighteenth fairway at Pebble Beach. Earth Polychromatic Camera. Is a mini ICE AGE on the way? Scientists warn the sun will 'go to sleep' in 2020. New study claims to have cracked predicting solar cycles Says that between 2030 and 2040 solar cycles will cancel each other outCould lead to 'Maunder minimum' effect that saw River Thames freeze over By Mark Prigg For Dailymail.com Published: 17:40 GMT, 10 July 2015 | Updated: 20:42 GMT, 10 July 2015 The Earth could be headed for a 'mini ice age' researchers have warned. 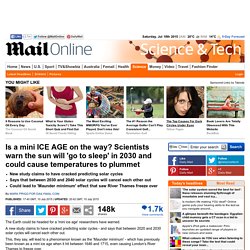 A new study claims to have cracked predicting solar cycles - and says that between 2020 and 2030 solar cycles will cancel each other out. This, they say, will lead to a phenomenon known as the 'Maunder minimum' - which has previously been known as a mini ice age when it hit between 1646 and 1715, even causing London's River Thames to freeze over. Scroll down for video A silent sun: In 2011 this image was captured showing an almost clear sun - which experts say could happen for almost a decade from 2030. Conventional wisdom holds that solar activity swings back and forth like a simple pendulum. Pacific Satellite in United States. Stunning NASA Visualization Reveals Secret Swirlings of Carbon Dioxide. NASA has released a striking visualization of how carbon dioxide flows around the world. 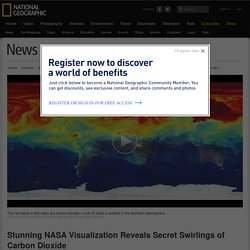 In the simulation, plumes of the greenhouse gas gush into the atmosphere from major industrial centers, swirling from continent to continent on the winds of global weather systems. The simulation, which took 75 days to create on a supercomputer at NASA's Goddard Space Flight Center in Greenbelt, Maryland, depicts CO2 emissions from May 2005 to June 2007. Its superhigh-resolution mapping—64 times as great as the average climate model—dramatically illustrates two often neglected facts. The first is that CO2 emissions come almost exclusively from the Northern Hemisphere. The deep red plumes of the normally invisible gas flow from clusters in the United States, Europe, and Asia, eventually pooling over the Arctic region. The second is that massive amounts of carbon dioxide are absorbed seasonally by forests and other vegetation. 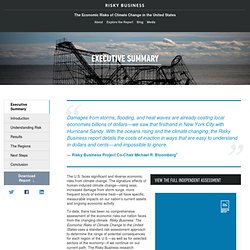 With the oceans rising and the climate changing, the Risky Business report details the costs of inaction in ways that are easy to understand in dollars and cents—and impossible to ignore. Risky Business Project Co-Chair Michael R. Bloomberg1 The U.S. faces significant and diverse economic risks from climate change. The signature effects of human-induced climate change—rising seas, increased damage from storm surge, more frequent bouts of extreme heat—all have specific, measurable impacts on our nation’s current assets and ongoing economic activity.

To date, there has been no comprehensive assessment of the economic risks our nation faces from the changing climate. Our findings show that, if we continue on our current path, many regions of the U.S. face the prospect of serious economic effects from climate change. NWS radar image from San Francisco Bay Area, CA. Weather.gov National Weather Service Enhanced Radar ImageSan Francisco Bay Area, CA Radar Radar Status Message Range and Bearing Information (left click to select a location): How does this work? 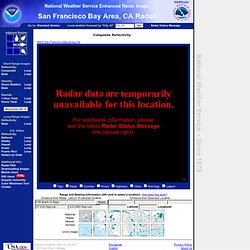