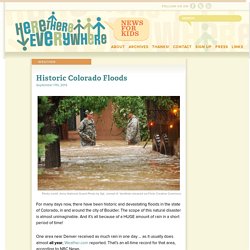 Joseph K. VonNida released via Flickr Creative Commons For many days now, there have been historic and devastating floods in the state of Colorado, in and around the city of Boulder. The scope of this natural disaster is almost unimaginable. One area near Denver received as much rain in one day … as it usually does almost all year, Weather.com reported. The rain overwhelmed rivers and streams causing “flash floods” as the banks couldn’t absorb or contain the water. Colorado floods: 6 dead and 700 missing. Nearly 100 trapped school children airlifted to safety. Almost 100 children and teachers left stranded by flash flooding near to Boulder, Colorado, rescued in dramatic airliftHeavy rains that started Wednesday sparked flash-flooding from Fort Collins to Colorado SpringsResidents urged to leave now or risk being stranded for weeks without water or powerThe National Weather service says there has been over 12 inches of rainfall since September 1, breaking the 73-year-old record for the monthSurging floodwaters in Boulder led to the evacuation of about 4,000 residents late ThursdayPresident Obama has approved a federal disaster assistance request for the area and National Guard have been dispatched By Daily Mail Reporter and Ryan Gorman Published: 16:24 GMT, 14 September 2013 | Updated: 23:25 GMT, 30 September 2013 The students from Fireside Elementary School in Louisville, Colorado - around 10 miles to the southeast of Boulder - were trapped when flood-waters burst over roads at an outdoor education center in Jamestown. 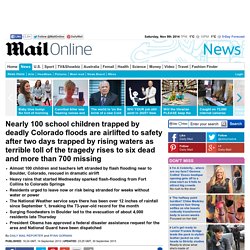 Floods: 10 of the deadliest in Australian history. THE DEVASTATING NATURE OF recent floods in Australia have meant that they often hit the headlines. 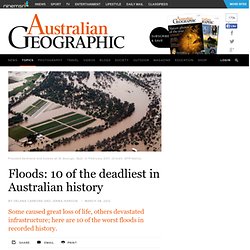 While Australia is described as the driest inhabited continent on Earth, right now it might seem hard to believe. Between 1852 and 2011, at least 951 people were killed by floods, another 1326 were injured, and the cost of damage reached an estimated $4.76 billion dollars. Floods can devastate local communities, but they also impact the entire economy - examples include the flood levy imposed in taxes following the south-east Queensland floods in 2010/2011, and also inflated banana prices after the same floods destroyed 75 per cent of the crop. Professor Jonathan Nott, a palaeohazards expert at James Cook University in Cairns, says part of the problem is that we "continue to build in the path of floods," regardless of history, and allow populations to increase in low-lying floodplains. Natural History Museum. Floods What causes floods? 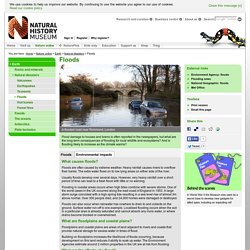 Floods are often caused by extreme weather. Heavy rainfall causes rivers to overflow their banks. The extra water flows on to low lying areas on either side of the river. Floods. In 2002, heavy rains in Texas caused a reservoir to overflow. 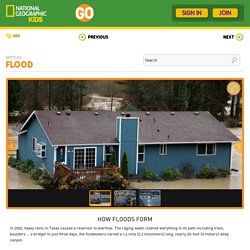 The raging water cleared everything in its path including trees, boulders ... a bridge! In just three days, the floodwaters carved a 1.4 mile (2.2 kilometers) long, nearly 20-foot-(6 meters)-deep canyon. A flood is a rise of water with no place to go. Floods come in all depths, from just a couple inches to many feet. The power of floodwater is extraordinary and lethal. What is a flood? Introduction to Flooding Many of us have this idea that floods (or flooding) is simply, too much water around your house. 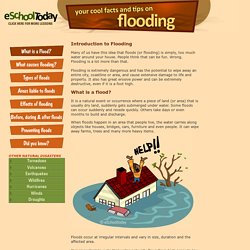 People think that can be fun. Wrong. Flooding is a lot more than that. Flooding is extremely dangerous and has the potential to wipe away an entire city, coastline or area, and cause extensive damage to life and property. What is a flood? It is a natural event or occurrence where a piece of land (or area) that is usually dry land, suddenly gets submerged under water.

When floods happen in an area that people live, the water carries along objects like houses, bridges, cars, furniture and even people. Floods occur at irregular intervals and vary in size, duration and the affected area. It is important to note that water naturally flows from high areas to low lying areas. Weather Wiz Kids weather information for kids. Rain & Floods How does rain form? 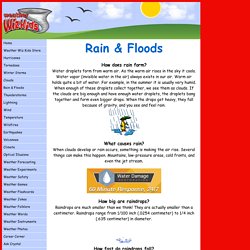 Water droplets form from warm air. As the warm air rises in the sky it cools. Water vapor (invisible water in the air) always exists in our air. Warm air holds quite a bit of water. For example, in the summer it is usually very humid. Flood Facts for Kids - Interesting Information about Floods. Web Weather for Kids: Wild Ride During a Flash Flood. Do you know how to stay safe? 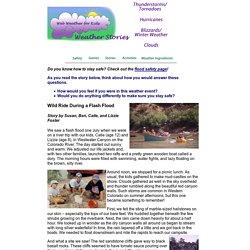 Check out the flood safety page! As you read the story below, think about how you would answer these questions. How would you feel if you were in this weather event? Would you do anything differently to make sure you stay safe? Wild Ride During a Flash Flood Story by Susan, Ben, Catie, and Lizzie Foster We saw a flash flood one July when we were on a river trip with our kids, Catie (age 12) and Lizzie (age 8), in Westwater Canyon on the Colorado River. Around noon, we stopped for a picnic lunch. First, we felt the sting of marble-sized hailstones on our skin – especially the tops of our bare feet. And what a site we saw! The rapid turned out to be a wild ride as usual, but it was all the more exciting because of its color.