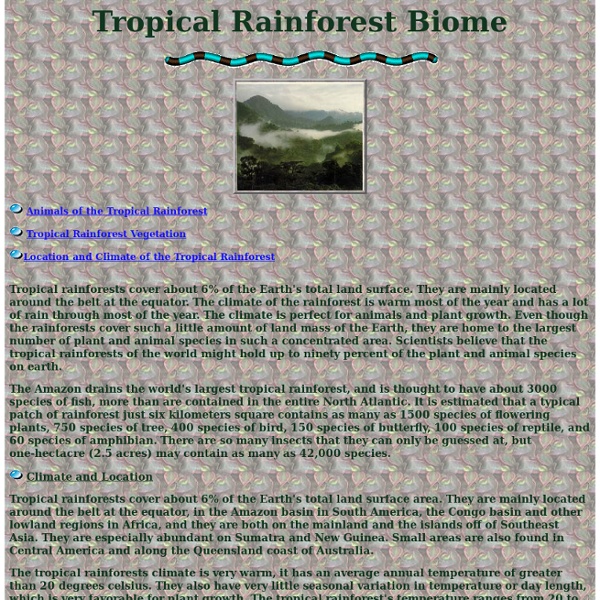 Temp. Tropical Rain Forest As you can see from the map to the right, the tropical rainforests are, indeed, located in the tropics, a band around the equator from 23.5 N (the Tropic of Cancer) to 23.5 S (the Tropic of Capricorn) (red lines on map, right). Because the Earth tilts 23.5 degrees on its axis as it travels around the sun, at some point in the year (the solstices, June 22nd in the north, December 22nd in the south) the sun will be directly overhead on one of these lines. At the equinoxes the sun is directly over the equator. Within this band, solar radiation is most intense, and thus the surface of the planet warms the most. Not all of the land in the tropics is tropical rainforest. {*style:<a href=''>*}{*style:</a>*}Another biome similar to the tropical rain forest is the{*style:<b>*} cloud forest.

The average temperature in the rainforest is about 30C, 80F it changer very l... Tropical Rainforest The rainforest that we have chosen to do our project on is in and is called the Amazon Rainforest. You can see on the picture in the upper left corner that the Amazon is the dark green area on the map. This zone which covers much of the northern half of that is east of the and north of the which centers at the equator. It extends through large parts of . This biome is surrounded by dry forests and savannas. In an average year in a tropical rainforest, the climate is very humid do to all of the rain which amounts to about 250cm per year. The climate is found near the equator. 40o F. This is red fungus (Pycnoporus sanguineus) these would be classified in the Fungi kingdom. This is white fungus (Lentinus) and it would be classified in the Fungi kingdom. This is the fern leaf. This is the Cattleya Plant. This is the Toco Toucan. This is the vampire bat. This is Euglena. This is an Actinopod. Howler Monkey The howler monkey is the loudest monkey in the rainforest. 1. 2.

Fact sheet: Tropical Rainforest Animals Where can you find an antelope the size of a rabbit, a snake that can fly, or a spider that eats birds? All in tropical rainforests, of course! Tropical rainforests are home to the largest and the smallest, the loudest and the quietest of all land animals, as well as some of the most dangerous, most beautiful, most endearing and strangest looking animals on earth. Q: Why do more animal species live in the rainforest than other parts of the world? A: Scientists believe that there is a great diversity of animals because rainforests are the oldest ecosystems on earth. The nearly perfect conditions for life also helped contribute to the great number of species. Some rainforest species have populations that number in the millions. Q: Which type of rainforest species is most numerous? A: If you were to visit a rainforest, you probably wouldn't run into many jaguars or monkeys. Scientists estimate that there are more than 50 million different species of invertebrates living in rainforests.

More facts! Top 10 facts about the Amazon Rainforest | The Inside Track | Travel Blog from On The Go Tours The Amazon is synonymous with Central and South America – it’s the largest of the rainforests, supporting a huge number of plants and animals and hugely important to our own survival. Taking up most of the Amazon Basin, the Amazon rainforest is mostly contained within Brazil, and stretches into Peru, Ecuador, Bolivia, and smaller parts in some other South American countries. Here are ten interesting facts about the Amazon (and rainforests in general) that you may not have heard before. 1. 2. 3. 4. 5. 6. Over half the world’s plants and animals can be found in the rainforests. 7. 8. 9. 10. Sunset on the Amazon River Clearly now is the time to visit this amazing region learn more about this natural marvel and to help gain and spread awareness about how urgent the need to save the rainforest is. Go hiking, swimming, canoeing or simply photograph the many thousands of mammals, birds, reptiles and other creatures all sharing a home within the Amazon. Source: How Rainforests Work