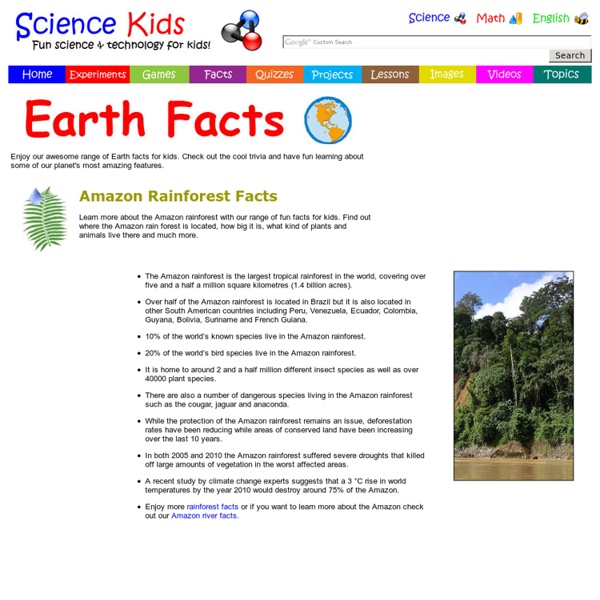 info_8116227_10-interesting-tropical-rainforest-biome At least 80% of the developed world's diet originated in the tropical rainforest. Its gifts to the world include fruits like avocados, coconuts, figs, oranges, lemons, grapefruit, bananas, guavas, pineapples, mangoes and tomatoes. It has also provided vegetables including corn, potatoes, winter squash and yams; spices like black pepper, cayenne, chocolate, cinnamon, cloves, ginger, sugar cane, tumeric, coffee and vanilla and nuts including Brazil nuts and cashews. Rainforest Animals Download free lesson plans and teaching resources on money management and financial capability fun facts Endangered Rainforest Animals Animals are categorized under endangered species if they are at risk of becoming extinct either because of their few numbers or due to the change in the environmental condition. As per the International Union for Conservation of Nature and Natural Resources (IUCN) data, about 40 percent of the total organisms are on the verge of extinction in the near future. In 1963, the IUCN created the Red Data List of more than 15,500 species, after evaluating the extinction risk of various species and subspecies worldwide. This list is also known as IUCN Red List of Threatened Species or IUCN Red List. Among the many ecosystems, rainforests are those forest areas that are characterized by heavy rainfall (1750 - 2000 mm). They represent one of the richest ecosystems on Earth and are referred to as the 'Jewels of the Earth'. Types of Endangered Rainforest Animals Gorilla Scientific Name:Gorilla gorillaIUCN Red List Category and Criteria: Critically Endangered A4cde ver 3.1 Sumatran Orangutan Chimpanzee

Verification Handbook: homepage Trushar Barot is assistant editor at the Social Media and User Generated Content hub at BBC News. He has worked in the British media for the past 15 years, across newspapers, TV, radio, online, social and digital. Over the past 4 years, he has helped develop and implement BBC News' social media strategy and its "social newsroom" at its new headquarters in Central London. One powerful image can define a story. That was certainly the case for BBC News’ User Generated Content hub in the beginning of July 2005. Then the July 7 bombings in London happened. That morning, as the BBC and other news organizations reported a power surge on the London Underground, the UGC team started seeing a very different story emerging via content sent to BBC News directly from its audience. Photo: Alexander Chadwick This was one of the first images the team received. That image, and others like it, showed the terror and chaos in London during the moments immediately after the attacks. 1. 2. Who are they? 3. 4.

misty, low lying moisture(fog) Saving Forests Page Content These nature-based initiatives aid in global mitigation efforts by preserving or restoring standing forests, which absorb massive amounts of carbon from the atmosphere.[Click to enlarge & view our slideshow] Protecting forests has always been central to CI's mission. Human activity is the main cause of deforestation, usually tied to economic development, increasing consumption rates – in both developed and developing countries – and extractive industries such as logging. Pristine jungles are burned and cleared for farming and ranching, or for plantations to produce biofuel crops. Science in Action: Putting out Fires The loss is irreplaceable. Forests also are important ecosystems in the balance of nature, providing a multitude of resources and services essential to all people. In addition, burning and clearing forests emits approximately 16 percent of the greenhouse gases that cause climate change, more than all the world's cars, trucks, and airplanes combined.

Download 100,000+ Images From The History of Medicine, All Free Courtesy of The Wellcome Library The Wellcome Library, in London, specializes in the history of medicine. While the institution has long offered a good digital collection for browsing, the library announced yesterday that they are making more than 100,000 historical images free to download under a Creative Commons CC-BY license. (Users can distribute, edit, or remix at will; the license even allows for commercial use, with attribution.) The Wellcome’s holdings represent the institution’s long-term interest in collecting art related to medicine, the body, public health, and medical science. The drop-down menu labeled “Technique” in the standard search box returns a staggering array of types of visual culture, from aquatint to carving to fresco to X-ray. Some images in the collection are, perhaps unsurprisingly, squirm-inducing (an 1851 Japanese woodcut showing an amputation of the lower leg; a Dutch etching depicting a 17th-c mastectomy; a German illustration showing 17th-century monks performing eye surgery).