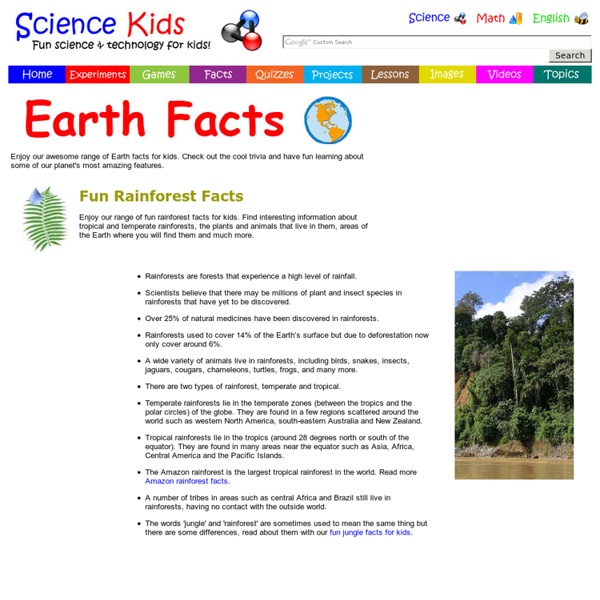 Rainforests for kids What are the different layers of a Rainforest Called? There are four main parts of a Rainforest. They are: Emergent Layer - very sunny because it is the very top. Only the tallest trees reach this level. Who lives here? Canopy Layer - much of the rain is stopped by the thick foliage. Understory Layer - many vines, dense vegetation, not much light. Forest Floor - dark, damp, full of many dead leaves, twigs and dead plants. Click here to find out more

Animals You Can Find in the Tropical Rainforest The Nine Different Types of Intelligence Intelligence is broken down into nine different types, also called the nine domains of intelligence. This categorization of intelligence was first theorized by developmental psychologist Howard Gardner in his 1983 book, Frames of Mind: The Theory of Multiple Intelligences. Since then, the Multiple Intelligences theory been used as one of the primary models for research that has gone on concerning human cognition. Gardner argues that there is no one true way to measure intelligence and that the human brain is wired with a wide range of cognitive abilities. Framing intelligence in the way Gardner does disrupts the old mold of thinking in which intelligence was ultimately a measure of (what Gardner would call) logical-mathematical intelligence. 1. Ever wonder why certain people are able to connect with animals just like that? 2. While other people gravitate towards nature, there are also those who tend to be drawn to the musical arts. Read about how music changes your brain 3. 4. 5. 6. 7.

BBC Nature - Rainforest videos, news and facts Calculating Deforestation in the Amazon Calculating Deforestation Figures for the Amazon These figures are calculated from estimates provided by the Brazilian National Institute of Space Research (INPE) and the United Nations Food and Agriculture Organization (FAO). The figures only refer to the Brazilian Amazon, which accounts for roughly 60 percent of the Amazon rainforest. According to a study released in September 2009 by Brazil's National Institute for Space Research (INPE), at least 20 percent land deforested in the Brazilian Amazon is regrowing forest. Please note: Amazon deforestation data is updated several times a year here. Recent news on deforestation in the Amazon All figures derived from official National Institute of Space Research (INPE) data. Accumulated forest loss in the Amazon. Brazil could substantially boost its agricultural output while increasing protection of its native ecosystems, finds a new analysis published by the Climate Policy Initiative (CPI), an international think tank. more news

Population Decline of Indigenous People Indigenous peoples inhabit a large portion of the Amazon rainforest and their traditional and cultural beliefs have existed for centuries, providing storage for an immense amount of knowledge about the tropical Amazon. In contrast, the non-indigenous population of the Amazon is exploding. From the 1960’s until the late 1990’s, this number grew from 2 million to around 20 million. [1] As the development of infrastructure projects continues within the Amazon rainforest, migration of non-traditional peoples will increase and come into conflict with traditional forest-dwellers, particularly those not protected by reserves. Within Brazil, the indigenous population is estimated to be 310,000. While not as large as Brazil’s, the indigenous communities of other countries containing tropical rainforests (Bolivia, Ecuador, Peru, Colombia, the Guyanas, Venezuela, and Suriname) all consist of populations with deep and detailed knowledge of the rainforest. Written by Dr. References: 1.) 7.) 8.)

Amazon deforestation jumps in Brazil, but remains historically low Deforestation jumped 16 percent in the Brazilian Amazon to 5,831 square kilometers for the year ended July 31, 2015, but still remained well below historical levels, according to data released Thursday Brazil’s National Space Research Institute (INPE). The rise, which was announced just ahead of the opening of U.N. climate talks in Paris, had been widely anticipated based on data from short-term satellite-based monitoring systems. Climbing deforestation has been attributed to several factors, including Brazil’s flagging economy and currency, which makes forest conversion for agriculture more attractive; the government’s steep cuts in funding for programs to reduce deforestation; a renewed push for large-scale infrastructure projects in the Amazon; and relaxation of the country’s Forest Code, which governs how much forest must be preserved on private lands. The latest INPE data are preliminary. Note: this post used text from a prior Mongabay post on the subject.

Layers of the Rainforest The facts about rainforests are quite intriguing, and by dividing it into layers, we have a better opportunity to learn more about the different environment and life forms existing in these layers. Rainforests receive large amounts of rainfall every year (more than 250 cms). These warm, dense, and wet forests are very important for human sustenance as the plants are responsible for the generation of large volumes of oxygen. The rainforest is divided into four main layers, which differ in the amount of sunlight they receive, the surrounding temperature, the life forms dwelling in them, the humidity levels, etc. Emergent Layer This is the extreme top portion of the rainforest, which comprises tall trees sticking out from rest of the tree population. Several emergent trees produce seeds that can be transported via wind currents. Canopy Layer Directly beneath the top emergent layer is the canopy layer, which comprises trees that are about 65 to 130 feet tall.

Howler Monkeys, Howler Monkey Pictures, Howler Monkey Facts - National Geographic Howlers are New World monkeys found in tropical Central and South America. They are aptly named for their cacophonous cries. When a number of howlers let loose their lungs in concert, often at dawn or dusk, the din can be heard up to three miles (five kilometers) away. These vocal primates are the biggest of all the New World monkeys. Howler monkeys have beards and long, thick hair which may be black, brown, or red.

Which Animals Live In Rainforests? Which Animals Live In Rainforests? Orangutans Do. Photo: Wikimedia Commons Rainforest Animal Species Which animals live in rainforests? Even though tropical rain forests cover less than 6 percent of the earth’s surface, scientists estimate that at least half of all animal species in the world live there. See A Map Of The World’s Tropical Rain Forests Read More About Rain Forest Predators: Crocodiles, Giant Constrictor Snakes, The Big Cats And The Giant Eagles Read More About Rainforest Primates: Monkeys, Apes And Lemurs Of course, science is already familiar with a lot of rainforest animals and birds. Animals of the various tropical rainforests around the world evolved thousands of miles from one another, and are therefore different from continent to continent and even from forest to forest. Which animals live in rainforests? Among rain forest reptiles, the pythons of Africa and Asia have their New World counterpart in the anaconda of the Amazon jungle. Be Sociable, Share!

All About Orangutans Orangutans are large apes that live in southeast Asia (on the islands of Borneo and Sumatra). These apes mostly live in trees (they are arboreal) and swing from branch to branch using their arms. The word orangutan means "man of the forest" in the Malay language. As its habitats are being usurped by man, the orangutan's population is decreasing and it is in grave danger of extinction. ANATOMY Orangutans have a large, bulky body, a thick neck, very long, strong arms, short, bowed legs, and no tail. Hair: They are mostly covered with long reddish-brown hair. The Head: The orangutan has a large head with a prominent mouth area. Senses: Orangutans have senses very similar to ours, including hearing, sight, smell, taste, and touch. Hands and Feet: Orangutan hands are very much like ours; they have four long fingers plus an opposable thumb. SIZE Orangutans are about 2/3 the size of the gorilla. INTELLIGENCE AND LANGUAGE Orangutans are very intelligent. Orangutans live in Asia. Advertisement.