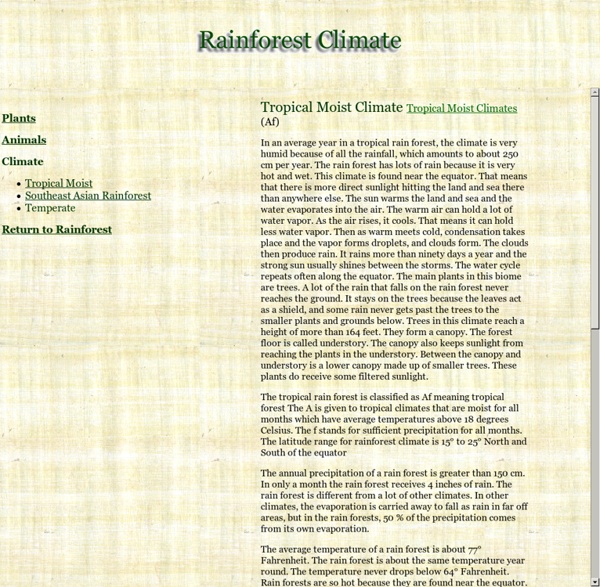 The average temperature in the rainforest is about 30C, 80F it changer very little through out the year Tropical Rainforest The rainforest that we have chosen to do our project on is in and is called the Amazon Rainforest. You can see on the picture in the upper left corner that the Amazon is the dark green area on the map. This zone which covers much of the northern half of that is east of the and north of the which centers at the equator. It extends through large parts of . In an average year in a tropical rainforest, the climate is very humid do to all of the rain which amounts to about 250cm per year. The climate is found near the equator. 40o F. This is red fungus (Pycnoporus sanguineus) these would be classified in the Fungi kingdom. This is white fungus (Lentinus) and it would be classified in the Fungi kingdom. This is the fern leaf. This is the Cattleya Plant. This is the Toco Toucan. This is the vampire bat. This is Euglena. This is an Actinopod. Howler Monkey The howler monkey is the loudest monkey in the rainforest. The howler monkey can get up to 2ft and there tail 30”. 1. 2.

toucan The Plants of the Rainforest A tropical greenhouse More than two thirds of the world's plant species are found in the tropical rainforests: plants that provide shelter and food for rainforest animals as well as taking part in the gas exchanges which provide much of the world's oxygen supply. Rainforest plants live in a warm humid environment that allows an enormous variation rare in more temperate climates: some like the orchids have beautiful flowers adapted to attract the profusion of forest insects. Competition at ground level for light and food has lead to evolution of plants which live on the branches of other plants, or even strangle large trees to fight for survival. The aerial plants often gather nourishment from the air itself using so-called 'air roots';.

The rainfall can get as less as 6ft or it can…