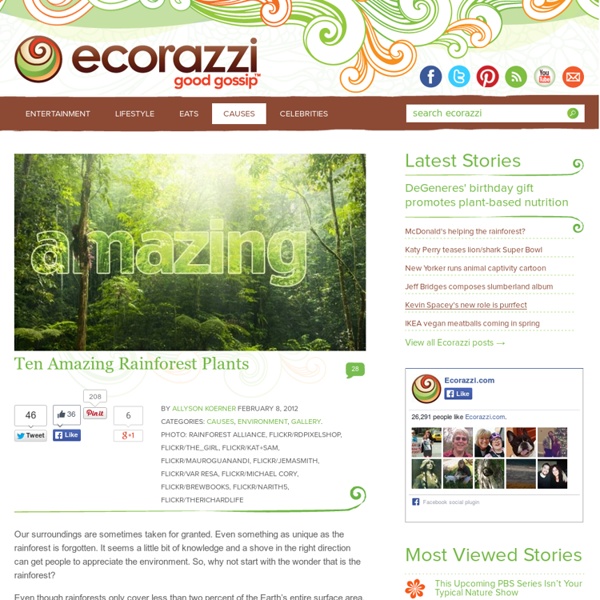 Our surroundings are sometimes taken for granted. Even something as unique as the rainforest is forgotten. It seems a little bit of knowledge and a shove in the right direction can get people to appreciate the environment. So, why not start with the wonder that is the rainforest? Even though rainforests only cover less than two percent of the Earth’s entire surface area, they are home to 50 percent of the plants and animals. They are also found on every continent, except Antarctica. You’re probably thinking “I know all there is to know about bananas; I eat them for breakfast and can make delicious banana bread.” Habitation: Found in Central America, South America, Africa, Southeast Asia and non-tropical regions like the United States thanks to modern agricultural technologies. Known for their beauty, orchids are the largest family of plants in the world. What would you do if you couldn’t have that cup of coffee in the morning? Want some more amazing rainforest galleries?

Rare Plant The rain forests of the world are estimated by scientists to contain 80% of the green flowering plants in existence and it is estimated that 2.5 acres of tropical rainforest may contain more than 750 types of trees and 1500 species of higher plants. With the loss of each acre of rainforest to farming, logging or other form s of development, hundreds of species disappear forever. The number of endangered rain forest plants is vast and rather than attempt to list every known species of plant that is endangered only two of the better known ones will be presented here.

climate. A tropical rainforest is an ecosystem type that occurs roughly within the latitudes 28 degrees north or south of the equator (in the equatorial zone between the Tropic of Cancer and Tropic of Capricorn). This ecosystem experiences high average temperatures and a significant amount of rainfall. Rainforests can be found in Asia, Australia, Africa, South America, Central America, Mexico and on many of the Pacific, Caribbean, and Indian Ocean islands. Within the World Wildlife Fund's biome classification, tropical rainforests are thought to be a type of tropical wet forest (or tropical moist broadleaf forest) and may also be referred to as lowland equatorial evergreen rainforest.[3] Tropical Rainforest Biome: Plants and Animals Tropical rainforests are characterized by the presence of tall trees and a warm and wet climate. With the average rainfall never registering below 168 cm (66 inches) and the monthly temperature always exceeding 18ºC, the biome of tropical rainforests have adapted to these temperature conditions. These rainforests are so unique to the biodiversity they exhibit that 40% to 75% of all the species in the world are endemic to its dense cover. Let's get to know the way of living of the plants and animals inhabiting this ecosystem. ✦ Vegetation Structure Scientists have divided a rainforest into four zones or strata on the basis of the living environment.

Plants If you're not a microbe and you're not an animal, you are probably a plant. There are about 300 thousand known species of plants. Because plants adapt so well to almost any climate, scientists needed a way to organize the hundreds of thousands of species. Helpful Plants Tropical Rainforest Resources Edible Rainforest Plants Allspice: (Pimenta dioica) Berries-- shaped like peppercorns-- of an evergreen tree which can grow up to 100' in height in height in the Latin American Rainforest. Tropical Rain Forest As you can see from the map to the right, the tropical rainforests are, indeed, located in the tropics, a band around the equator from 23.5 N (the Tropic of Cancer) to 23.5 S (the Tropic of Capricorn) (red lines on map, right). Because the Earth tilts 23.5 degrees on its axis as it travels around the sun, at some point in the year (the solstices, June 22nd in the north, December 22nd in the south) the sun will be directly overhead on one of these lines. At the equinoxes the sun is directly over the equator. Within this band, solar radiation is most intense, and thus the surface of the planet warms the most. The warmth leads to a lot of evaporation, and as warm, moist air rises, it cools, the water condenses, and the water falls back to the earth as rain.

Plants of the Tropical Rainforests Tropical Rainforests T ropical rainforests are the wettest places on earth Billions of different kids of animals and plants live in tropical rainforests The tropical rainforests have billions of species (kinds) of plants and animals, more than anywhere else on Earth. Scientists do not yet know all the species that are to be found in a tropical rainforest and new ones are still being discovered. The Plants of the Rainforest A tropical greenhouse More than two thirds of the world's plant species are found in the tropical rainforests: plants that provide shelter and food for rainforest animals as well as taking part in the gas exchanges which provide much of the world's oxygen supply. Rainforest plants live in a warm humid environment that allows an enormous variation rare in more temperate climates: some like the orchids have beautiful flowers adapted to attract the profusion of forest insects. Competition at ground level for light and food has lead to evolution of plants which live on the branches of other plants, or even strangle large trees to fight for survival. The aerial plants often gather nourishment from the air itself using so-called 'air roots';.

Avarage Weather The tropical rain forest is a forest of tall trees in a region of year-round warmth. An average of 50 to 260 inches (125 to 660 cm.) of rain falls yearly. Rain forests belong to the tropical wet climate group. The temperature in a rain forest rarely gets higher than 93 °F (34 °C) or drops below 68 °F (20 °C); average humidity is between 77 and 88%; rainfall is often more than 100 inches a year. There is usually a brief season of less rain. In monsoonal areas, there is a real dry season. The average temperature in the rainforest is about 30C, 80F it changer very l... Tropical Rainforest The rainforest that we have chosen to do our project on is in and is called the Amazon Rainforest. You can see on the picture in the upper left corner that the Amazon is the dark green area on the map.

About the Rainforest - Information and Facts on Tropical Rainforests, Save the Rain Forest The role of the rainforest transcends scientific definitions. Even though only 7% of the world’s original rain forests remain, more than half of the planet’s species still live there. This wealth of life benefits us every day. Tropical Rain Forest: an Endangered Species Spotlight Topic Tropical rain forests once blanketed the Earth like a wide green belt around the equator. Just a few thousand years ago rain forests covered 14 percent of the Earth’s land surface, or 5 billion acres. Humans already have destroyed half of this forest area, with most damage occurring in the last 200 years. With just 2.5 million square miles (647 million hectares) of tropical rain forest remaining, we continue to lose an estimated 93,000 square miles (150,000 square km) a year.

Cold Tempetures Updated January 11, 2009 A rainforest is a forest differentiated by high levels of precipitation - normally a minimum of at least 68-78 inches (172-198 cm) annually. Rainforests tend to have fairly mild and/or warm climates and feature the highest levels of biodiversity in the world. Additionally, tropical rainforests are considered the "lungs of the Earth" because of the high amount of photosynthesis occurring in them.